Enchantia: Wrath of the Phoenix Queen

500 years ago, the kindhearted Elven Queen Isandra was killed and possessed by the Phoenix Spirit, a hardhearted and conceited mystical entity who wants to burn down the entire world into ashes. Terryn who, as a Half-Elf, was alive to witness those events is, coincidentally, your mentor on an educational expedition to the site where he sealed up the malevolent spirit after it destroyed the Elven kingdom. As you arrive at the site, the ancient seal is glowing with power: the Phoenix Spirit has escaped. Now you, the Destined One, must use your Skybird magic to stop the Phoenix Queen once and for all in Enchantia: Wrath of the Phoenix Queen, an epic fantasy story embedded in a hidden object adventure game from Blue Tea Games. 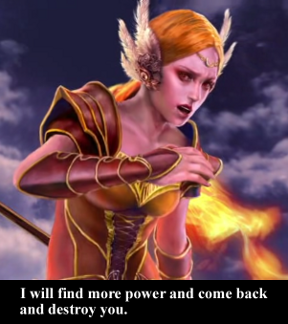 Fixing the seal and entering a new realm is only your first task. Throughout this adventure, you'll be given numerous quests to complete by a wide cast of characters—mortal and mystical—whom you encounter as you travel a wide map. Explore gorgeous settings overflowing with intricate details, finding and creating ornaments, charms and other tools to further your progress and learning more about the people and myth arc behind the Phoenix Queen story. Pointing-and-clicking just about anywhere in the scene will either reveal a puzzle to solve, a hidden object scene to work through, or narrative details about the world of Enchantia.

The gameplay is mostly adventuring-type tasks, including some back-and-forth between the various lands via a smart map, with a good dose of hidden object search scenes sprinkled throughout. These hidden object searches are in the same style and structure as those in the Dark Parables series—you're presented with a beautiful scene to feast your eyes on as you look for fragments of an ornate object which, once complete, will prove useful in another area of the game. There is the occasional minigame as well, creative interpretations of some standards such as tile switching as well as more innovative puzzles such as an alchemy style puzzle. The collector's edition includes some bonus puzzles as well as a new adventure; there is also a rather challenging side-quest to find 20 morphing objects hidden in various scenes. 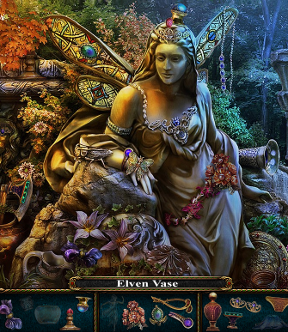 Analysis: With plenty of subplots spanning eleven chapters, each about twenty minutes long depending on your speed of play and how many hints you choose to use, Enchantia: Wrath of the Phoenix Queen feels more lengthy than it actually adds up to be (about three and a half hours of playing time). There are several cutscene movies but also many more sidebars in which you engage in dialogues with the people you encounter. At times, it's hard to tell what's going on in the story because so much is going on in the story. Enchantia aspires to be like a J.R.R. Tolkien adventure; it presents stories of the Elf, Human and Dwarf kingdoms, each with its own history and subplot in such a way that those who appreciate that sort of fantasy novel would enjoy in the game. 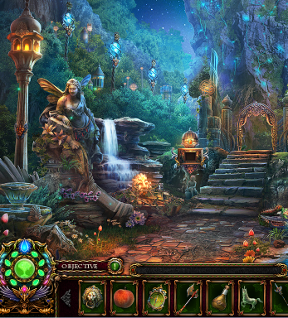 To the disappointment of some fans, though, Enchantia: Wrath of the Phoenix Queen differs from Blue Tea Games' other releases. While the gameplay is very much like Dark Parables in every way, the story presentation is not. This is a more convoluted and complicated epic, and it's not always handled as well as it could be. Although it's apparent the game designers were trying to make a philanthropic statement about world issues, some of the plot elements tend to be glossed over in an effort to relate a large story without taking away too much from gameplay. Players may need to assume best intentions but there are times when sensitive and controversial events are not given the weight they deserve. I'm avoiding spoilers here, but be warned that you, as the central character, will be faced with a mortal dilemma that has no winning sides.

As an allusion to great fantasy works such as The Lord of the Rings, though, Enchantia: Wrath of the Phoenix Queen does hit its mark. It's refreshing to engage in an original plot line instead of a fairytale rehashed. Although it has its cliche moments, Enchantia stays fresh enough to command attention and it's likely you'll lose track of time as you're involved in gorgeous scenery, entertaining stories, and gameplay that is both serene and challenging. Enchantia: Wrath of the Phoenix Queen is a remarkable creation from a talented game designer, an aesthetically enchanting epic that will tug at your heart as it sweeps you into its magical realm.

A Collector's Edition of this game is also available. It contains bonus content not found in the standard edition: bonus chapters, strategy guide, wallpapers, soundtrack and more. Remember that Big Fish Game Club Members pay only $13.99 for Collector's Editions (or 2 club credits), and collector's editions count 3 card punches of 6 total needed for a free game.