Eden's Quest:
The Hunt for Akua

Another day, another National Geographic cover for the appropriately-named treasure seeker Eden Hunt. She's getting a bit bored, so when she receives a challenge in the mail to go to a mysterious island and find a treasure, she's game. "Game" turns out to be the operative word, because she's going to have to puzzle her way past her competitors if she wants to come out on top in Eden's Quest: the Hunt for Akua. 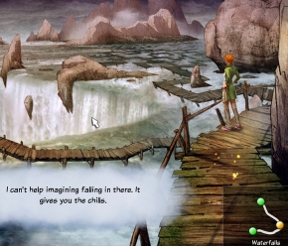 Eden's Quest will take you back to the days when your parents would give you books with titles like Jumbo Book of Puzzles or One Hundred and One Amazing Brain Teasers. The game is essentially a collection of dozens and dozens of puzzles from all kinda of genres, most notably the brain teaser variety. As you search the land for clues, traveling from one point-and-click location to another, you'll encounter loads of these mini-games that range wildly in style, complexity, and difficulty.

Contrary to the game's description, there is not a single hidden object scene to be found (picking up pieces of paper does not count as a hidden object scene!), although the setup does resemble the skeleton of some hidden object titles out there. If you're sniffing around this game for some item finding fun, get ready to discover something else entirely. It plays a bit like last year's Big Brain Wolf, though notably without the hilarious storyline and stronger exploration elements. 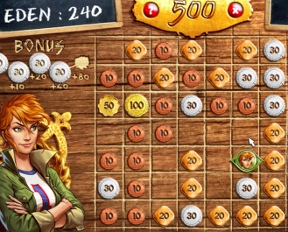 Analysis: Eden's Quest: The Hunt for Akua was made by Ouat Entertainment, creator of Pure Hidden. If you played Pure Hidden, you'll know exactly the kind of style to expect with Eden's Quest: light-hearted, casually entertaining, the perfect level of challenge, and a presentation that's easy on the eyes.

Despite a premise that could genuinely be exciting, the script saps all the energy. I found myself clicking through dialogue as fast as I could just to get to the next set of puzzles. I was genuinely surprised by some of the plot twists, but then I realized it was because the characters were flatter than flounders and comparable to them in terms of human motivation too. In fact, that ought to be a brain teaser for the next game: if the entire cast were replaced with flounders opening and closing their mouths in dull surprise, how much more interesting would this script be?

While that's certainly an area that could be improved, the five plus hours of gameplay I racked up in story mode were spent on the puzzles, and the game there is a lot of fun. While there are a few puzzle genres represented that I dislike (slider puzzles! *shakes fist at heavens*), and doubtless a few that you will dislike as well, the sheer variety means that you're on to the next thing before you get too frustrated. My favorite by far was the recurring mini-game YoX, a fast-playing two player strategy game where one player moves horizontally, the other vertically. That game was so well-done, I played it every chance I got, and would love to see it released as a standalone title.

If you're in the mood for puzzles, mini-games and brain teasers, Eden's Quest will scratch that itch for sure. I'll hop along for the ride next time Eden sets out — flounder or no flounder.

Is the acting as bad as it was in Escape from the Museum? I still regret spending good money on that game.

The acting is fine. By the way, this game is A LOT like Professor Layton for Nintendo DS. If you like that formula, this game is quite good as well.

Found this for you Joye

Thanks Digi! I'll write the company myself and find out what's up. Maybe it's an upcoming title?

Got an error message at the 26th brainteaser. It was in French and seemed to be saying that one of the jpg files was missing. Contacted BigFishGames over the weekend. I imagine they'll get back to me soon.

andyou, the same thing happened to me, except my entire video was messed up. I rebooted 4 times and the same thing kept happening, even after upgrading DirectX and my video driver. Of course, this was AFTER I paid for the game.

I had the same issue, but with the last update, i was able to finish the game without any glitches.
And as Joy said, it's very fresh and beautiful!
If you want something else than HOG, it's your game!

I love this game, its story, characters, puzzles and graphics!
I'm a Professor Layton fan and now I'm a Eden's Quest fan!
There are some little glitches, but I recommand this game!

This turkey crashed every time I had one of the picture-puzzle puzzles, and at one point rebooted the computer (and I have a Mac!!!) 14 challenges into the 22 I was supposed to have in the 3rd module, all the idols vanished ... no way to finish the blessed thing!!

I think they will update the game tomorrow. If it's the same issue of the PC version, you can push enter when you have the black screen to play ;)

Hello guys,
I think this game is great but some of you are unlucky and are stuck.
So, here are my savegames. I think it could help you!
Here it is :
http://www.filefactory.com/file/b0ab282/n/saves_EdenQuest.rar

[I've confirmed the .rar file above contains nothing but harmless .xml saved game files along with instructions (for both Windows and Mac) on how to use them. -Jay]

It seems the game never saves. I got to Zone 2, had to leave, hit exit and when I returned, I was back at the beginning. Tried this several times to no avail. Is there a patch?

I am also having trouble with it not saving. It saves once and then starts me at that point every time I open the game. I've done the same puzzles 3 times now, any suggestions?

Saving's OK for me, but Puzzle 66 won't let me attach a bird to the middle shadow. This seems a common bug for the Mac version, being reported on Big Fish and a few others. Sounds like there's a fix out there, but casualgameplay would need to update...

There is a new Mac version available through the Casual Gameplay store that addresses a few issues noted above.

You should be able to re-download and replace the existing version with the new one.

Help! I'm stuck on puzzle 59, the 4 digit code to unlock the chest. Does anyone care to share the code? Thanks!

i seem to have a problem getting to zone 4.. i have completed all 24 challenges yet it still says that i have more to do and will not let me do the tanagram.. does anyone know how to fix this?

I have the same problem as JIGuest. Can anyone tell us what to do?

I am also stuck on puzzel 59 - just can't figure out the code. Can anyone help?

The code for Challenge 59 - A Chesty Code is:

Can someone please explain to me the logic of how on earth the answer can be what it is on Challenge 006 - Snake Pills. I know what the answer is, and I won't put it here so I don't have to waste time putting in a spoiler, but I don't see how in the world that can possibly be the answer.

I'm sure it is very logical and very simple, it is just late and I am tired and cannot see any logic in it whatsoever.

I want to know step by step how that number could possibly be the answer.

By the way - I might add here - I have seen on every single walkthrough how everyone has put the answer, but I have seen NO ONE put any explanation as to how that could be the answer.

I am having the same problem as JGuest and Tereza, back on March 31 and April 3. I have opened the chest and solved 24/24 challenges but when I try to solve the tanagram it tells me I can't untill I solve everything else. Any help would be appreciated!

I am also having the same problem as JGuest and Tereza, I can't seem to get to zone 4. I have completed 24/24 challenges, it shows 0 Totems remaining, Eden says to complete the Tanagram, but when I click on it is says I must complete all the challenges in the zone before I can complete the Tanagram. Any help would be appreciated!

I hope someone can help, I am stuck on Edens Quest - the puzzle-the chesty code, I have tried everything and cannot get the combination correct,could you please help, cheers

Can anyone explain the logic behind the chesty code in puzzle 59? I had to see the spoiler. I don't understand how we could figure out the code with the info given, other than chance.