Echoes of the Past:
The Castle of Shadows

Back in the olden days (2009, which is pretty darn olden) I reviewed a game called Royal House of Stone which was both very neat, and very, very short. In it, you found a very strange painting in an old museum that transported you to a silent land under the thrall of a wicked witch. (You didn't get any ruby slippers, unfortunately.) Echoes of the Past: The Castle of Shadows brings you back to that same museum... this time because a painting of a certain young woman has been coming to life and frightening guests. Rather than calling Guinness or the Mythbusters they call you, and you arrive to discover that the witch you thought you dealt with before is decidedly untrounced and causing havoc in another time period. It's up to you to save the day and step through the picture frame in this inventive new hidden-object, point-and-click adventure hybrid. 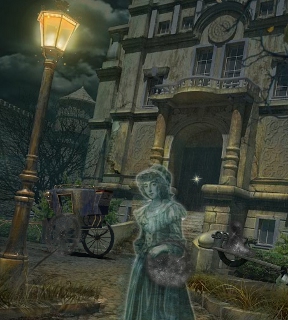 You explore the world by clicking on the environment and investigating places of interest. Your goal is ultimately to deal with the witch, but the inhabitants of the realm you've entered need your help too... apparently being a shadow person unable to move, speak, or see and dwelling endlessly in a state of unbeing is sucky or something. Whiners. Occasionally you'll find your progress blocked when an item you need to progress has been "cursed into shadow", and you'll need to first figure out what you need from the shadow left behind, and then track it down. You might find it just loitering about somewhere, or you might have to find the items in a hidden-object scene. Be careful; hints can be used immediately, but they're limited and can only be replenished by finding other mirrors scattered around.

However, what's interesting is that periodically throughout the game, you'll actually have to put back items that you found during a hidden-object scene. The magic mirror will tell you that the items you found were misplaced, and ask you to put them in their proper locations in a new area. It's just a clever little puzzle twist that keeps the game from feeling like a scavenger hunt. Not that there's anything wrong with scavenger hunts, of course, but I'm sure even you can admit your eyes start to glaze over round about the time you have to locate seven screws, an ace of hearts, and a parakeet for the umpteenth time.

Analysis: I'm rapidly growing to look forward to the Echoes of the Past titles, with their beautiful visuals and lovely environments. Yes, I know, "witch, peril, ancient curse, we're all doomed, bla-de-bla-de-bla," but just look at the detail here. Not only are areas and people beautifully rendered, but each scene is also full of subtle animated details that help make you feel more immersed in what's going on, and less like you're looking at a static page from a storybook. The writing, unfortunately, is more than a little stiff, and most of the plot is pretty predictable. The game has you make questionable decisions and fall for an obvious ploy or two simply because the game would end early if you didn't. So suck it up, Wile E., and step onto the big ACME target in the middle of the room. 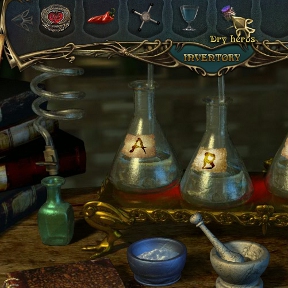 The puzzles in the game are implemented fairly well, but none of them are very unique, and only a few of them pose any sort of challenge. We've been mixing recipes in hidden-object games for a long time now, for example, and everyone has some variation of the "light up all the adjacent buttons" puzzle. Some of the item locations and uses seem a bit like an excuse to pad the game too, particularly later on when items are usually in the same room as where you need them. Royal House of Stone was painfully short, but it was also very light on busywork. As good looking and enjoyable as Castle of Shadows is, you do get a bit of a sense that all these extra steps are just there to prolong the inevitable, rather than because they were important to the gameplay or plot.

But despite these slight bumps in the road, Echoes of the Past: The Castle of Shadows is a welcome improvement over its predecessor. Most players can probably expect to spend around or over four hours on their quest to defeat the witch (which unfortunately does not involve dropping a house on her), and they'll enjoy nearly every second of it. While I might hope future installments flex their creative wings a bit more in the puzzle department, as it stands the series is proving to be a big contender in quality, and has a lot to offer fans of the genre.

A Collector's Edition is also available. It contains a bonus adventure to play, wallpapers, strategy guide, and more. Remember that Big Fish Game Club Members pay only $13.99 for Collector's Editions (or 2 club credits), and collector's editions count 3 card punches of 6 total needed for a free game.

Loved this game. So far its the best Ive played of this kind. Even the hidden object part was different and fun. It has kept this old lady busy for more then a week. I wish I had known how good it was as I would have bought the collectors game so I could have the bonus levels. If anyone knows of any more that are like this , would you please let me know. I also love that it was very long and detailed. I wonder if there is a way to tell when you are down-loading a very long game? I hope there will be another one soon.

To wjguest: I have almost finished the game(I think)but I can't get further than the pick and the 4 jewels. Can you tell me how to find the armor for the guy in the castle?