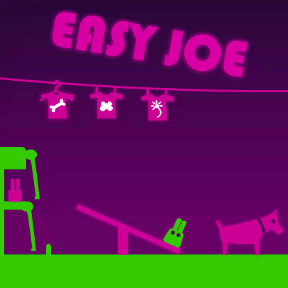 I would point out that a wise woman once said bunnies aren't as cute as everybody supposes, but Easy Joe, a short point-and-click puzzle game from Gamystar, is not only cute... it's pretty darned cute. Joe, our titular (and bunnicular) hero, wants to see the world. Can't say as I blame him, either, because this hip, neon world is as wonderful as it is weird. Each screen represents a little puzzle, and you click on different objects to try to figure out the correct order to proceed. A little experimentation is all that's needed, and there's no way to really get yourself stuck.

So, yes, okay, one glance at a screenshot should tell you that if the gaming world was a buffet, Easy Joe would be a light puff of cotton candy served to you by someone who could only communicate via improvisational jazz. I honestly wish there were more games like this; so gleefully silly and cleanly designed. There's an easy charm to it that makes it the perfect thing to perk you up during a coffee break, even if it isn't going to win any prizes for being intellectually stimulating. (Although I like to imagine the hot dog is watching "Inside the Actor's Studio" on the telly.)

The downside, if there is one, is that the game isn't called "Moderately Challenging Joe" or even just "Longer Than it Takes to Boil an Egg Joe". I would be surprised if the entire thing took you longer than ten minutes to complete, and there's really no reason to go back and play it again unless you just want to hear that toe-tappin', finger-snappin' soundtrack one more time. Still, Easy Joe is proof that you don't have to be epic to be fun, and this funky little gem should bring a smile to your face, unless you're the sort of person who hates joy. In which case, stop reading my articles, Mr Ebert.

You know, at least one person will need this. Somewhere. After all, there's nothing we can't face except for bunnies.

Could have been longer and slightly more difficult. It was fun while it lasted.

This was a very cute game, although I agree with kingjulien86 in that it was way to short. But then again it was called easy joe so I guess it lived up to its title. well I liked it all the same so ...
Keep em coming jay

I agree, short, but still a fun quick little game.

A very pleasant game! Music/art/everything's great, even though very easy (hey, just look at the name). I'd consider this more of an interactive art, almost, considering how well done some of the Golberg machine-esque "puzzles" are. Overall, I think this still deserves a good 4/5.

WHAT? No walkthrough!! Help!

Very nice (albeit short) game! I loved the cutesy presentation, wish it could be made into a more fleshed out game... :P

And what's with all the carrots?

Why do they need such good eyesight for anyway?

I had a grin on my face throughout the game so wide that it was painful by the end. Great atmosphere! Too bad it wasn't longer or more challenging.

Cute game! Love the music and the graphics. Easy to play, but still enjoyable.

Perfectly cute and simple I thought. I hope they expand it, but I won't fault the creators for making it short.

Fun and easy, just like the name! Can't wait for Medium Joe, which should be longer.

Loving this game as my best cup of coffee! :D

hrrrrm..Are we on a Once more with feeling kick Dora? two games with quotes form the show..and she was a wise lady wasn't she...shame no games have hugs and puppies yet.

You know, at least one person will need this. Somewhere. After all, there's nothing we can't face except for bunnies.

Was just depressed. This cheered me up.

love the casual feel and the music of the game, but the colors are hurting my eyes. Simple, and fun. Good job.

I liked it, but Joe was kind of a jerk, wasn't he?
Didn't even bother leaving his bowtie on when he went to the fancy dress party.

That was a cute couple of minutes. But even if it wasn't intended as a description of the actual game's soundtrack, the phrase "improvisational jazz" really did not belong in the review.

The sponsor screen or whatever loaded up, it has Fast Games and Gamystar and Joe, but no button I can click to start the game. :( Am I missing something?

[You should see a "Continue" button appear after the game loads. If it doesn't, try updating your Flash Player and disabling your browser extensions. -Jay]