With all the ways we've shot, exploded, crushed, melted, and otherwise eliminated zombies, you'd think they would be a protected species by now, but then again, an endangered animal that bites and oozes decomposing fluid is a hard sell even with a sad Sarah McLachlan commercial. Earn to Die 2012 Part 2 continues the slaughter from Part 1 in this upgrade-centric action game from Toffee Games. Once more chasing rescue from this post-apocalyptic zombie wasteland, you've moved on to a new location with a new vehicle, new enhancements, and even more zombies to grind into paste beneath your wheels as you ramp off an exploding barrel in slow motion. Just hold the up [arrow] to accelerate, and press the left or right [arrows] to tilt your vehicle accordingly. You'll drive until you run out of gas or can't get enough speed, and then you'll be paid out from... uh... some... one?... to purchase new upgrades for the vehicle you're driving. 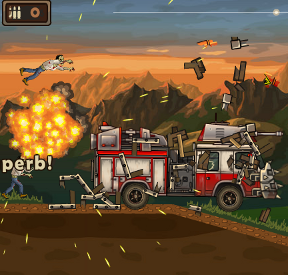 Though the gameplay remains essentially unchanged, Part 2 still feels like it has a bit of a leg up over its predecessor simply by offering a more engaging track off the bat. There are more structures to smash through or ramp off of, and you're given more fuel from the get-go to allow you to go even farther and rack up more cash... though this is admittedly not as big a deal as it seems since the prices for everything are proportionately larger too. The bigger, clunkier vehicles are also easier to get stuck on certain parts of the terrain, which is frustrating, and since each run is identical to the last in terms of zombie placement and obstacles, it feels like more randomised elements would have kept things fresher. Still, it allows you to experiment and plan more early on with trying to pull off stunts as you drive, which helps provide some variety from the inevitable grinding, especially since each new area means you have to start upgrading from scratch with a new vehicle because... of reasons, I guess. If you enjoyed the original game for the zombie-crushing mania it offered, chances are you're going to enjoy this for the same reason even if it doesn't really do much to pry itself out of the mold it created. And hey, when has watching zombies sprint after you like cheetahs and launch themselves into gravity-defying leaps to cling to your hood right before you smash through a pile of bricks ever not been amusing?

Not sure how to get past level 1. I've maxed everything and have money to spare but run out of fuel and boosts before I reach the finish line. Suggestions?

Hi jcfclark. Try using your boost only as you're driving up ramps or steep inclines, which should send you flying a long ways, and don't use gas when you're driving downhill. The trick is to use your momentum over your gas whenever possible to gain as much distance in the air, and save your boost otherwise for powering through structures that might slow you down.

I actually passed all the levels by constantly holding down the accelerator and using all my boost right away.

The largest issue with this game is the fact that the most annoying thing about is which we complained about on the 1st version (this is version 3) has still NOT been altered or removed.

The extremely annoying "AWESOME" etc stupid messages that slow down the game at exactly the wrong times.

A lot of this game is luck, the rest is pure speed or reaction time. How fast can you remove your finger from the accellerate key when the slowdown messages happen.

It doesn't seem like the fuel meter drops any less quickly whether I'm pressing the Up arrow or not, so coasting down hills hasn't helped me at all.

It turns out that Bill's strategy seems to be the best one. I burned off all my boost early, but I was traveling so fast that I had burned hardly any fuel and had more than enough to make it to the end, whereas I couldn't make it 2/3s of the way trying to hypermile.

What I've found works best is holding down the gas while my wheels are touching the ground, and using the boost while I'm in the air. If it seems like I'm going to be up there for a while, I try to angle myself up. I've flown most of the way across stages this way.

However, I've never been able to complete a stage without buying everything.

My idea for the next game: skip the car, and build a rocket.

I agree, Bill's method works the best, but it's a pretty stupid method to have to use to beat a level. I don't know what they've changed, but in the previous games at least I felt I was somehow contributing based on what I did with the car. My suggested method is to skip the whole game entirely.

imo this version is the best http://furg.net/earn-to-die-3/

1,018 Views
0 Comments
chrpa— Jayisgames needs your help to continue providing quality content. Click for details Welcome to Mobile Monday! Goro Sato's game, similarly as their previous one, is a good classical escape with an attractive looks and a magical atmosphere. The next...  ...

3,435 Views
3 Comments
chrpa— Jayisgames needs your help to continue providing quality content. Click for details An animated journey across the poetry of the land, Wayfinder by Matt DesLauriers, has calming and contemplative gameplay and expresses our connection with the natural world. You can...  ...

2,047 Views
0 Comments
chrpa— Jayisgames needs your help to continue providing quality content. Click for details In the first game by Zachary Richman you need to find a way through a labyrinth which you can rearrange to make it passable. Chase of Bass...  ...