Vampires are the new "it" thing, for reasons we shall not name, and recently they've become quite the item in casual games. Dracula: Love Kills goes back to the roots of the legends and casts you in the role of the non-sparkling Count Dracula, the original vampire that no teenage girl would ever want to date. It's a hidden object adventure from Waterlily Games that's heavy on story, atmosphere, and puzzles, and there are plenty of unlockables to get your cold, vampiric hands on, too! 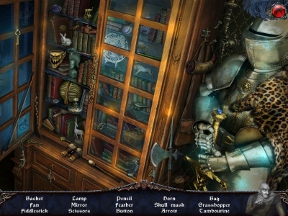 Dracula: Love Kills starts with the Count waking from a long sleep to find his castle has been ransacked, his coffin destroyed, and crosses fill the path leading to the village. The vampire queen seeks to undermine Dracula's authority, and the Count is still weak from his previous battle with Van Helsing. Seeking to restore the fear inspired by his presence, he sets out to annihilate all who challenge his supremacy. It's time for Count Dracula to rule the night once again!

A puzzle-driven adventure game at its backbone, Dracula: Love Kills plays out in small areas of half a dozen screens or so, each featuring a number of items to find, puzzles to solve, and hidden object scenes to complete. You'll begin by poking around and clicking certain items that seem interesting or out of place, receiving a bit of information when necessary or even adding things to your inventory. Hidden object scenes also produce items which can be used to solve pressing puzzles in nearby locations. When you're done with a spot, a handy "location complete" sign appears, letting you know you can scour the pixels in another place with confidence!

Igor, Count Dracula's trusted servant, tags along in the adventure, providing hints and a bit of commentary from time to time. You also have to make the occasional choice whether or not to feed from certain citizens you find, an action that has real consequences in the game. Filling your blood meter to the left allows you to use special abilities such as Vampiric Vision, so to bite or not to bite becomes a bit of a quandary! 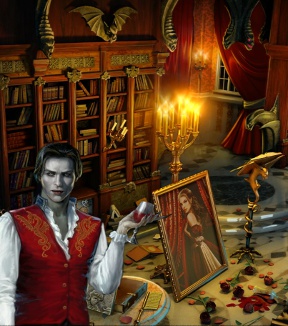 Analysis: Not a standard hidden object or casual adventure game, Dracula: Love Kills builds a bridge between genres and provides a puzzle-centric experience that plays less like a hidden object game and more like a puzzle game with a narrative. The number of achievements you can unlock is also impressive, adding to the puzzle focus of the game and encouraging you to play through with gusto.

Storylines in vampire-centric games aren't known for being terribly interesting, but Dracula: Love Kills manages to weave a varied sort of tale that dips and bobs while you play, introducing new twists that keep you honestly interested in what happens. There's even backstory you can read from the book you pick up at the beginning of the game, which should delight anyone enjoying the story quite a bit! It may be a love story involving vampires, but Dracula: Love Kills manages to do it right.

A good length from start to finish, plenty of things to unlock/achieve, a story you actually want to take part in, and puzzles built around a hidden object/adventure core, Dracula: Love Kills is an excellent addition to any casual gamer's library.

Take the Key and the Piece of Shield (1/6) on the right side of the crypt.

The Room of the Knights

to the left of the mining cart track to reveal the Gear (3/3).

Once the game has been beaten, click the Extra Gameplay tab in the middle of the Main Menu to continue the story.
The Theater

I usually get bored easily with pure hidden object games, and usually the hidden object/adventure hybrids don't strike the right balance, or have adventure tasks that are too repetitive or easy--but this game, based solely on the demo, is fantastic!

Dracula is sort of poorly voiceacted, but the *incredibly* earnest Igor more than makes up for it. Someone make that guy employee of the year.

The objects you have to find are nicely done--they're not anachronistic, which bugs me sometimes in other games. It's got a robust, rich, "classic horror" feel thanks to the great illustrations, and there seems to be a lot to do, thanks to the different achievements available to be unlocked.

And yes--the plot is interesting! Definitely give the demo a try, and if you've got the bucks, it's probably worth a buy, too.

Take the Key and the Piece of Shield (1/6) on the right side of the crypt.

The Room of the Knights

to the left of the mining cart track to reveal the Gear (3/3).

Once the game has been beaten, click the Extra Gameplay tab in the middle of the Main Menu to continue the story.
The Theater