Dr. Langeskov, The Tiger, and The Terribly Cursed Emerald: A Whirlwind Heist

Dr. Langeskov, The Tiger, and The Terribly Cursed Emerald: A Whirlwind Heist is the finest adventure game you've ever played. I mean, look at that perfectly crafted and not-at-all-pretentious title. Surely an opportunity like this presents itself but once in a lifetime! So download the game and get ready for a magnificent journey to the very depths of... What? Someone is already playing the game? I'm frightfully sorry, but we are somewhat understaffed, so we can only run one game at a time. Just sit tight and someone will be with you shortly. Created by Crows Crows Crows, a studio directed by William Pugh (the brilliant mind behind The Stanley Parable), this is one game where absolutely nothing can go wrong, and the staff is most definitely not on strike because they fear for their lives. 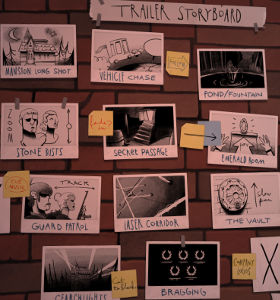 If you've played The Stanley Parable (and if not, you have to), you know that explaining this game would ruin the fun. All you need to know is that you use the [WASD] keys to move and the mouse to interact with stuff. You also have one of the crew members to guide you through the game, voiced by the adorably awkward British comedian Simon Amstell. Together, you make a stellar team, and you'll figure it all out in a jiffy. Or... maybe not. Half the staff is missing in action, there's a tiger lurking somewhere, the whole thing is a shambles. But even with all the confusion, you'll be done in less than half an hour, depending on how willing you are to explore every nook and cranny. Some might even say that this is not a game, but an experimental something, and they could be right, but the point is that it doesn't really matter. What matters is that it's entertaining, amusing and it might make you think. Is it about the troubles of game development? The relationship of the creator and the user? Is it a cautionary tale about the exploitation of wild animals? Anything is possible! On the other hand, if it doesn't make you think, that's alright, too. It doesn't take itself seriously, so you don't have to, either. After all, it could just be an elaborate inside joke. But even if you don't take anything away from it, you should give it a try. Games like this don't come around often enough, and this one is certainly original and silly enough to make it worth your while.

Windows:
Get the full version (Pay What You Want, including free)

Mac OS X:
Get the full version (Pay What You Want, including free)

This was short but very lovely. Hopefully it's a prelude to Crows Crows Crows developing some bigger experimental titles.

It's also difficult when a game like this comes out, because you want to recommend it without revealing the reasons why you're recommending it.

The director commentary tapes are... unusual. The Little Tommy tapes in particular had a weird sort of charm that made you want to laugh and grind your teeth simultaneously.

It's unfortunate that the game

uses so many indoor locales that resemble the rooms of The Stanley Parable. I would have liked to see more variety with some outdoor environments.

There is no demo to give a hint as to what I am buying. I can't really justify buying anything sight on seen.

sorry, that is meant to be unseen. oops..

Since the game is Pay What You Want, you are able to "buy" it for free as mentioned in the review, and then return to the page to pay for it later depending on how you enjoy it to support the developer. :)

Thanks Dora. I did think of that, but mama's stamp is strong and it just feels wrong. BTW, is there a way to delete, or edit comments? If not, may I suggest it?

I was getting error messages when trying to extract it. Something about not encrypting.

I feel like I must be missing the magic "how to interact with things" button. With the mouse, I can really only click where instructed, with some very minor exceptions

like picking up coins and sticky notes, toppling brooms, and very occasionally flipping some black on/off switches (which don't seem to influence the progression or outcome of the game).

Oh, and I apparently failed

How To Pick Up Phones. No matter how I click - single, double, click and hold, click and drag - I immediately drop the handset after picking it up. Is there a trick I'm missing, or is this some sort of inside joke that I'm not in on?

About the cassette tapes,

there's a tape player on the table in the first room. If you pick that up, you can pick up and listen to the various cassette tapes throughout the game. Otherwise, you can't so much as look at the titles of the tapes.

As far as phones go,

you can't pick up the handset without hanging up immediately. I guess it's because you aren't meant to have a voice? Or the game doesn't want you to hear anyone else's voice apart from your "guide"?

If you are having trouble playing the game, I suggest you download the same game (it's free) on Steam. Steam doesn't seem to use zip files, so extraction shouldn't be a problem.

Furthermore, I agree with starchild.

Related spoiler to what Reka/starchild said:

As a smaller project, the game is very linear and so there are no branching paths. The only thing you can achieve from flipping switches and such is unlock additional dialogue from the narrator.

Also, the game seems to want you to be a silent protagonist, so the phone hang up is most likely the only thing you can do with phones.

Fun dialogue you can unlock if you haven't discovered it yet:

Stand on a table in the room with the stage you can fall off of.

Another (difficult?) bonus thing you can do but I can't figure out how to do for my life:

There's a Steam achievement to "steal an orange from the Orangery," but I can't seem to find the orange anywhere. If you haven't found the orange yet, try to do so. If you have, please leave a hint for me! This citrus-y hunt is killing me.

Super spoiler hinting at where the orange may be:

I believe the narrator hinted at the "Orangery" being next to the mansion when the player is about to enter the elevator.