From the creators of Doodle God, Doodle God 2, and Doodle Devil comes another element combining game for your iOS device! Doodle Farm plays on exactly the same formula that made the first games so successful, allowing you to mix and match increasingly complex elements to expand your universe of animals one group at a time. There's discovery, there's learning, there's over 135 animals, and there's an alien dressed as a farmer. Sounds like a winner to us! 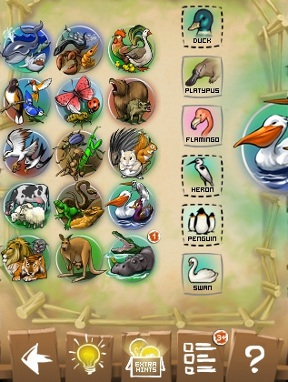 Doodle Farm works just like the previous games in the series, so if you know how to work one, you're ready to go in this new installment. Tap one of the element groups to open it up, then tap a second group to open those elements on the opposite side of the screen. Touch an element, then touch a second to try combining them. If they're compatible, they swirl around and combine, creating a new life form for you to gawk at. If they're incompatible, you'll just try and try again.

As you make matches, you'll have more and more elements to play with, making the possible creations grow almost exponentially. Going back and trying new animals on old elements is exciting, as you never know what's going to pop up next. Doodle Farm features a hint system that runs on a slow timer, offering you two types of nudges along with optional instant hints you can get through an in-app purchase.

A notable new feature makes Doodle Farm much less guess-centric than previous Doodle God games: borders. Each square features one of three borders that tells you a lot about that element. Solid black means you've used the element, but it doesn't indicate if there are more matches possible. Gray means the element is the end of the line, so you can pretty much ignore it, now. If the border is dotted, that element hasn't been paired with anything yet, meaning you should probably get to trying some combinations!

Analysis: Doodle Farm looks and plays exactly like the Doodle games that came before it, so on one level there really aren't any surprises to be had. On another, though, you can tell this incarnation of the element-combining series has a slightly different angle than before. Mixing animals is, well, imprecise at best, and you can't rely on your innate knowledge of the universe to create most creatures. There's also a number of refined visual and audio touches, as well as Wikipedia links to learn more about each animal you create!

The chief complaint about previous Doodle God games is that it's mostly trial and error element matching, tapping on every possible combination until you find something that works. There isn't as much logic involved, so there's no real challenge, learning curve, or point of mastery. Just touch here, touch there, repeat until it works. While Doodle Farm does add the new borders feature to make guesswork less important, the logic of combinations seems to have suffered. Why, for example, does a cockroach and a mosquito make a housefly? Mixing animals is far less elemental than, you know, mixing actual elements, so the clumsiness can usually be forgiven.

Another excellent game of alchemy from the team behind Doodle God. A great way to kick back, relax, and see what you can discover with a few swipes on your iPhone!

Doodle Farm Walkthrough
Since there are no generations in this game, I will provide a few ways to look up the animals.
List of animals in the order they were discovered

Is it too much to ask that these begin to come out more simultaneously for Android, if not Browsers as well? Apparently so...

[I think when you consider that many of these mobile developers are either single developers or small teams of developers, and that it takes time to create a solid game for a single platform; add to that the fact that time is money, and then it should be fairly obvious why games often appear on one platform before you see the game ported to other platforms (assuming the game is successful enough to justify the additional development). -Jay]

But making a flash game is easier than mobile right?
I think it's a money thing.

Yes, it's all about the money. It doesn't make a whole lot of sense releasing the free Flash game first unless you're just trying to test the market for a new game prototype. This game continues a tried and true formula for success, and it's likely we'll see a Flash version after the initial sales begin to taper off, as a means of driving new players to the mobile version.

Doodle Farm Walkthrough
Since there are no generations in this game, I will provide a few ways to look up the animals.
List of animals in the order they were discovered

I hope they make a browser version soon :(