In 2011, we believed that an armadillo could fly. Now, the hills are alive with the flying of dillos once more, as all the roly-poly creatures of the forest compete to see who is the roly-polyest. It's Dillo Hills 2, the new action racing game by Evil Space Chicken and Fex Labs! And this time, players will be competing against dasypodidae from around the globe. Though completely playable without it, Dillo Hills 2 does require a registration to keep track of your times and upgrades. 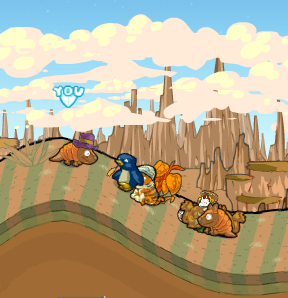 You launch yourself into the air by holding and releasing down, and press down again to hurl yourself to the ground in a ball to gain speed by rolling down hills, then release to boost yourself into the air. You can use up to glide a bit to better time your rolling. Collecting stars along the way will charge your bonus-meter, which, when filled, will grant a power-up with the [spacebar]. Winning races will grant you points and XP booster packs, which you can use to boost various stats or unlock new outfits and characters. Fans of the single-player original may be surprising at the multiplayer emphasis in this new iteration. Generally, though, the changes are for the awesome. The multitude of unlockables is, admittedly, probably there to make things a little more microtransaction friendly in the mobile version, but hey, 200 different stat-changing hats are 200 different stat-changing hats. Altogether, Dillo Hills 2 has that rollicking Mario Kart-esque sense of quickness and constant place-changing that makes for perfect pick-up-and-play fun. Armadillos, form and roll out!

For me Dillo Hills was a sort of Launch game. I *really* dislike the new racing and multiplayer aspects.

It forces you to log in to play anything but the practice runs, but I don't want to / can't get an account :(