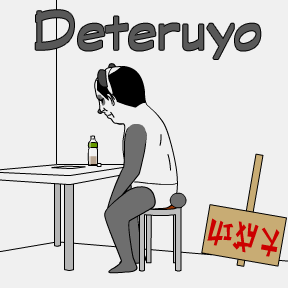 Throughout all the bathrooms, balconies, bedchambers, and any other room that can fit a puzzle of the escape game universe, one name is whispered that is known to summon strangeness incarnate. A name so unusual, we here at Jay is Games aren't allowed to speak it without donning a scarlet bathrobe, drawing on a pencil mustache, and doing our best Vincent Price impersonation. That name... is Detarou! dun, Dun, DUNNNN!! As soon as you're done shivering in your boots, perhaps you can check out Detarou's (dun dun dun!) latest surreal escape game Deteruyo.

It's not a typical feat to take elements of the incredibly bizarre and somehow turn them into a series of coherent clues, but Deteruyo is anything but typical. Detarou fans will be pleased to find healthy doses of obscure cultural and anime references (who wouldn't enjoy a Sailor Moon-esque derri�re transformation?) and a handful of pleasantly challenging puzzles. It should be noted that some of these puzzles are color based, which will likely present additional difficulties to the colorblind. Other minor quibbles appear, such as the unpredictable uses of some peculiar items and a boatful of red herrings. Fortunately, players are assisted by the familiar clean design, simple navigation, and the helpful feature of a changing cursor to indicate active areas. Lovers of the logically odd and oddly logical can expect the entertaining and rewarding feeling after breaking through each of the three endings in another incarnation of Detarou's signature flair.

Did I miss it, or was there no clue that

I needed to put the gold key into the gray thing?

Put the gold key inside the key-shaped hole. It just takes a bit of creative thinking to suppose that if one key can come out, another key can go in.

Keep in mind that the original use of the gold key is to unlock the exit door, and the purpose of the happy stamp is to reward you with a "good" ending for making the extra effort to explore.

This is the easiest time I've had with a Detarou escape yet! The surrounding are always surreal, but the puzzles are super logical. Only got caught up on the shape puzzle because

I failed to actually click on the picture corners to know it was one of "those" puzzles.

And for those new to Detarou, remember that they are super-fair when it comes to the cursor: if it doesn't change, then it's just more weirdness to look at, nothing more.

I completely agree! I think it's evidence of Detarou's evolving skill to show off the signature surreal atmosphere but to also prevent it from interfering with the puzzle solving aspects of gameplay. Gatiko was also much like this (which I would highly recommend if you haven't tried it yet) and I hope it is a continuing trend.