Like defense games? Then come play this one. Forever and ever. DefEndless by Mark Dolbyrev and Maxim Yakovenko is exactly what it says on the tin... a tower defense game that never ends. At least not until the enemy plunders all your treasure! When you run out of lives, it's game over with only a high score to keep you company, but starting again will net you a brand new map... with all the upgrades you bought intact! 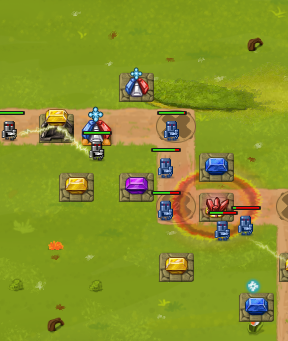 Taking a page from GemCraft, your towers are actually, well, gems. You'll get three of random colours between each wave to place wherever you like, and they attack whatever comes within range. Enemies will head towards your treasure, hitting each checkpoint along the way. They move faster on the road, but will be forced to go around any gems you put down. While all you have to begin with are a few simple colours, glows around them between stages mean you can click gems to combine them and make more powerful varieties, from simple flawless cuts to towers with special abilities. Refer to the encyclopedia (that's the little book icon at the top of the screen) for the best combination recipes! If things get hectic, you can also use the three magic spells at your disposal to help out. Of course, slaying enemies also grants you cold, hard cash you can spend on more lives, or enhancing the spells you own, or the basic abilities of each gem.

DefEndless, as a tower defense game, is somewhat less developed than its, uh, non-endless cousins and as a result, has a bit of a whiff of repetition about it the longer you play. It still offers a surprising amount of strategy in being able to combine gems into new tower types and drag them around the field, but it also feels like its lacking that undefineable something that makes the games it takes its inspiration from so compulsively playable. Boss fights? The ability to tell the colour of a gem before you place it? More unique enemy behaviours? All those things would definitely have added some oomph, but at the same time, DefEndless can still be surprisingly addictive. It's like the training wheels version of a tower defense game, bringing an almost arcade-like flair to the whole process that makes it perfect for fiddling with whenever you have some time.

Pretty decent game. Reminds of the classic game Gem Tower Defence , especially with diamond only hitting ground and amethyst only hitting flying. Although Defendless has fewer special combinations (and less creative in my opinion). Also it kind sucks that you can't remove the rocks (as far as I can tell). Overall, I'd have to rate the game 6/10.

I've been separating nodes 1, 3, and 5 from 2, 4 and 6 with a long, heavily armed wall and morphing a Vampire tower as soon as possible and still can't get past wave 19. What am I doing wrong?

I usually combine to 2x or 4x's when I can and am thinking that the singles offer better damage than the combos. Any hints?

I have been having the same issue as Stachey, but from what I can tell, the strategy of this game is very subtle and important. You can get through the first 10 levels on Normal fairly easily, but you're not going to get to level 20 without some serious changes.

To me, the goal (even though it's "endless") is to get to level 100 for that achievement. Some tips to help:

- Keep creeps off the roads at all costs
- Slowing towers are absolutely critical
- Always upgrade to special towers. Have a plan for which ones you want. Don't count on lvl 3 standard towers....they're worthless.
- Don't neglect your air towers. They may be useless otherwise, but air waves kill me 90% of the time
- Consider all your failures to be "training" for future games.
- Upgrade, upgrade, upgrade. Save your money and do NOT upgrade your special towers. That is a waste of funds Save your funds for the main upgrades; they are PERMANENT!
- Once you unlock higher difficulties, play them! You may not last as long, but you're making much more money.
- High upgrade levels will help on the lower difficulties. Save a lot of money (it transfers between games) and when you go back to an earlier difficulty to do well, THEN upgrade your special towers.
- Vampiric and teleportation towers seem useful, but if you NEED their benefits then you're already in trouble. They're not going to be able to help you fast enough to save you, especially a second time. You can save up enough lives with vampiric towers to save your skin for one level, but that next wave is going to plow on through.

I'm not even sure if level 100 is possible, but it IS a very addictive game, and I'm trying to work towards it!

LightWarriorK has the right idea but I'll give a few suggestions. Quick note lvl 100 IS POSSIBLE!!! I'm on lvl 135 now with a score of over 63 million and 1278 lives saved up. Click spoiler to see how...

-Use seperating techniques described by stachey to divide odd and even checkpoints.
-Get vampiric tower early to build lives.
-GET NECROMANCER!!! Higher level waves have too many hitpoints to kill with this! Will cut enemy lives by one third.
-Use teleporter.
-Don't worry about much air defense until later say around wave 50. Just save lives and take the hit. Even at wave 135 I still let 4-5 air through on each wave.
-Later use fire punisher and deadly cold near each other to get alot of splash damage.

Let me know if you have more questions I will try to check back and answer... Good luck!

Edit: type-o in necromancer note... "Higher levels have too many hitpoints to will *without* this"

Getting to wave 100 on normal is actually very doable. Some tricks:

jarrodgoodhue and wuppie gaved me a great strategy. I upgraded all on 10 level using money just for permanent upgrades like LightWarriorK said:
- magic on 10 level and
- elements on 10 level (now are on 12 because I spent some money later on).

Than my first spending on money and towers was vampire tower and I used strategy of jarrodgoodhue and wuppie.

Now I am on level 111, and I have:
- 3 vampire towers,
- 6 necromancer towers,
- 6 deadly cold towers,
- 4 midas towers and other towers (note that not all towers are fully upgraded)

The maze is soo long that if I hit magic at the creeps entrance I can hit it almost 2 more times.

I haven't placed even one air killer tower, but by towers are so strong that no enemy passes by.

A terrific TD game, kind of a "last word" on Tower Defense. So many of these want an open playing field, but they just get tedious, where this one works nicely. Some suggestions:

- If you have rocks, move them BEFORE you put down new towers, then you can put the towers right in their place and not get confused on what goes where.

- Most valuable tower is Necro, then Tele, then Vamp. You'll hit a point around level 25 where you just let all the flyers through and hope to have enough lives stockpiled to weather it.
- Until level 20, just work on your maze. Try to put the....
- AOE Ice/Fire in tandem is your most powerful tower type at first, and cheap, I was saying, try to put them on the road so that it will get flyers on 15, 20, and maybe 25.
- A long maze with lots of hits from Vamp will gain so many lives that around level 35, you can never lose.
- A long map also ensures most creeps get their one necro/tele. You only need one of each of these towers.