You'd think that the life of a best-selling novelist would be pretty boring, just sitting at home and writing all day, plus occasional jaunts here and there for book signings for fans. Not so for Dana Kingstone. Death Under Tuscan Skies: A Dana Knightstone Novel, the latest hidden object adventure hybrid in the Dana Knightstone series from BoomZap, finds our author as a visiting lecturer in Tuscany. Once again she becomes embroiled in solving a murder mystery, so the life of a professional writer might not be too boring after all. 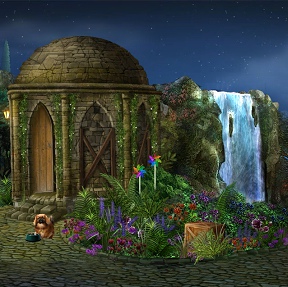 Dana has decided to take a break from writing and accepts a gig as a guest lecturer at a University in Tuscany. Yes, a free, all expenses paid trip to Tuscany. If you've played the previous game in the series, Death at Fairing Point: A Dana Knightstone Novel, then you can guess what happens the minute our heroine sets foot on the university campus: A handsome professor and a melancholy ghost make their appearances, and pretty soon Dana is blowing off research for the lecture to solve a mystery about Eva, a girl that died young of a mysterious disease and her missing love, Giovanni. First in and around the university, then later along the dreadfully picturesque Tuscan countryside the mystery takes the intrepid Dana as she rushes to discover why Eva died and what became of poor Giovanni whom her family disapproved of. If Dana can solve the mystery it looks like she might have another best-seller on her hands.

Although Death Under Tuscan Skies is classified as a hybrid, it's really a point-and-click adventure stuffed to the gills with tons of puzzles and mini-games, and a few hidden object elements occasionally thrown in. A changing cursor (and sparkles in easy mode) indicate places of interest or items that can be examined or picked up. There's also the usual notebook to keep track of clues (and notes for that later novel) and a bottom loading inventory to hold the various items picked up along the way. The refilling hint timer will give clues in the main adventure scenes as well as hints within the mini-games, puzzles, and hidden object scenes. Each of the six chapters of the story is pretty self-contained and wanders around the lavishly beautiful university, local town, and countryside of Tuscany, populated with interesting locals and ghosts alike. 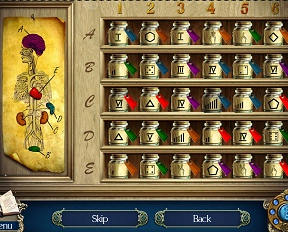 Analysis: Despite the spooky subject matter, Death Under Tuscan Skies: A Dana Knightstone Novel is not a jump-scare type of thriller. Rather, it is a gentle, somewhat romantic mystery that takes place in the ridiculously beautiful Tuscan locations. What makes it stand out is the fact that it is packed front to back with a wide variety of games and puzzles ranging from easy to head-bangingly difficult, with the hidden object scenes almost an afterthought.

Haunting, lyrical tunes accompany the player through unbelievably gorgeous scenery, from the dark and somewhat spooky university library to a sun-drenched Tuscan village and a remote and mysterious monastery. Each chapter is one location which cuts down on a lot of wandering back and forth, while presenting yet another picture-postcard locale to be enjoyed. The puzzles are a nice mix although they do tend to rely heavily on variations of slider puzzles, and they are skippable after a certain amount of time. The hidden object scenes are sharp and clear, and are also a nice mix of the standard list-type as well as "find 20 of a particular item" and others where you must find objects based on pictures or silhouettes. The mystery is...well, not very mysterious, although interesting enough to hold the gamers' attention while they puzzle their way through the scenic Italian countryside. Rather similar to the plots of novels these days by authors who got their start writing Harlequin and Silhouette romances (cough, cough, Nora Roberts, cough, cough). 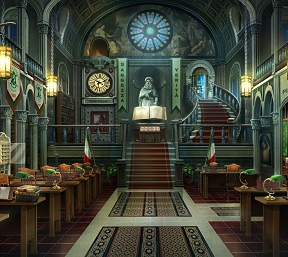 Death Under Tuscan Skies: A Dana Knightstone Novel has two modes of play, easy and advanced, and the length of gameplay depends on which mode is chosen, as well as how many puzzles and mini-games are skipped, but players can look forward to pretty hefty gameplay of several hours which is especially pleasing these days. Those looking for a relaxed, non-scary adventure that still features ghosts should give this amusing and entertaining hybrid a try.

Chapter 1: The University in Lucca

Outside the Administration Building

Dorm Lobby and Outside

Scooter Rental and Outside Wine Store

Outside Toy Shop and Town Center

Herb Garden and Outside Tower

Abbot's Room and Outside Tower

Outside Monastery and Herb Garden

Girl's Dorm and Outside

Outside and Inside the Cathedral

Congratulations! You have helped to reunite Eva and Giovanni, and assisted Dana Kingstone to complete her latest novel, Death Under Tuscan Skies.

Chapter 1: The University in Lucca

Outside the Administration Building

Dorm Lobby and Outside

Scooter Rental and Outside Wine Store

Outside Toy Shop and Town Center

Herb Garden and Outside Tower

Abbot's Room and Outside Tower

Outside Monastery and Herb Garden

Girl's Dorm and Outside

Outside and Inside the Cathedral

Congratulations! You have helped to reunite Eva and Giovanni, and assisted Dana Kingstone to complete her latest novel, Death Under Tuscan Skies.