While lots of people love romance novels, few things can pique someone's interest more than a good murder mystery. Dana Knightstone sets off to write the former, and ends up stumbling into the latter. She's been hoping that a trip to Scotland will provide her with the inspiration she needs to finish her latest historical romance (and finally propel her to the coveted status of "best-selling author"), but the old hotel she checks into has more than its share of secrets... some of them nastier than others. Death at Fairing Point: A Dana Knightstone Novel is part adventure, part puzzle, and a dash of hidden-objects, all wrapped up in one beautiful package. 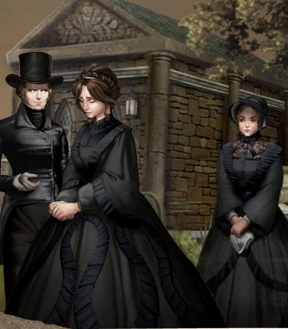 Following a silent apparition in her room one stormy night (all apparitions are contractually obligation to appear on only stormy nights), Dana quickly begins to uncover a two-hundred year old love story with a very unhappy ending. As Dana, you'll explore not only the manor, but the surrounding countryside and village as you slowly begin to piece together the story of romance, betrayal, and murder. While there are some hidden-object elements, and even a hidden-object scene or two, gameplay is largely puzzle based. As you investigate your environments, you'll gather up various objects and clues that you'll need to use to solve puzzles impeding your progress. A changing cursor denotes an area you can interact with, and Dana's journal keeps track of certain important objects or events, so make sure to refer to it if you find yourself lost. A hint function helps provide some direction, and puzzles also come with the ability to be skipped if you find yourself butting heads with them for too long.

Analysis: Less The Turning of the Screw and more Murder, She Wrote, Death at Fairing Point is a refreshing, light adventure with a gorgeous presentation. While it doesn't hold any real surprises as far as the plot goes, the game does a great job about uncovering details bit by bit the farther you go, and the locations you feature are wonderfully detailed with an appealing, hand-drawn aesthetic. The gameplay design is very well done, and since items and hints tend to be revealed to you just when you need them, you'll never find yourself frustrated as to where to go next. The decision to move to a new location with each chapter means that the game neatly sidesteps the boredom that could have set in with wandering around the same places for the whole game. Instead you get to travel all over the lush countryside and interact with a Who's-Who of quaint Scottish Stereotypes. The only real downside is that it won't pose much of a challenge to most players. 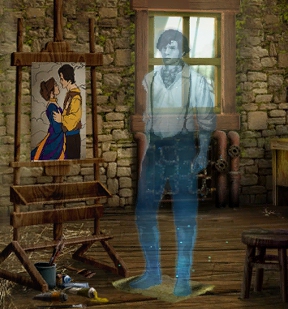 I'd like to tell you that my brain has evolved over the years to the point where the twitch of an eyebrow causes puzzles to swoon at my feet, but the fact of the matter is that Fairing Point just doesn't try very hard to challenge you. Certain puzzle types are repeated over and over throughout the game, and Dana's journal always records the answers to any riddles you might come across. Areas are also very tightly designed so that you'll never find yourself confused as to where to go, or what to do. It's a shame, because it feels like in an effort to make the game accessible to everyone, it misses its chance to provide a really substantial experience from all angles.

Still, for players who aren't looking for a real brain twister and just want something to enjoy, Death at Fairing Point easily exceeds expectations. Death at Fairing Point: A Dana Knightstone Novel is the casual gameplay equivalent of beach reading, something light and enjoyable that's easy to sink into for an afternoon or two. I'd love to see a sequel that gave a bit more of a voice to Dana, making her a more dynamic presence within the story and someone you really want to adventure with again. Until then, Death at Fairing's Point is a solid, fun title with a demo that any fan of mystery and romance should check out.

Road to Stables and Outside Stables

Outside Stable and Mailbox Puzzle

Records Office and Outside Town Hall

Congratulations, you have helped Dana to finish her novel.

Road to Stables and Outside Stables

Outside Stable and Mailbox Puzzle

Records Office and Outside Town Hall

Congratulations, you have helped Dana to finish her novel.

I have all the shot glasses but game will not let me place them on the shelf. Do I need something else?
Thank you

Kate -
Check Chapter 2 of Part 1 of the walkthrough posted above the comments. You need to have 10.

I've completed the switches on Williams statue, but she did not turn, there is no spotlight and the hammer and chisel don't do anything on the flower panel. Is the a glitch? Anyone know?

Sandi -
If you completed the switches and the spotlight doesn't come on, then you probably didn't do them in the correct order. Check the Atrium in the Bonus Walkthrough above the comments. There are instructions and a screenshot.
About the flower,

the spotlight needs to shine on it before the hammer and chisel will work.

How to get the "Not Nice ???" achievement... ,that is, the last on the achievement list? I get all the rest but have no clue on this one.

JiGuest -
What version are you playing? There are no achievements to collect in the download version of this game.

Oh yes there is, it's under the Setting tab I think. I just got this incredible CE game during the Labour Day weekend sale.

I obtained the magnifying glass but it's not in my inventory. Can anyone help me?

Ally -
Where are you in the game and what are you trying to do?

In case of need, there is a walkthrough posted above the comments.

menia -
I need to know which photos you have so I can tell what you are missing. Chapter 6 of the walkthrough above the comments has the solution to the Gallery Safe Puzzle in a screenshot.

At the end of chapter six in the museum lobby, I held the blank note over the candle, it showed the letter but when I click on it and it is placed below along with the ring, nothing else happens and I cannot move on to the final chapter 7. Help!

haidie47 -
The letter is suppose to go into your Inventory so you can use it later. Dana then goes back to Scotland. If the game is frozen and nothing happens, you will need to contact tech support wherever you purchased the game.

Sorry if I worded it incorrectly, but it does go into the inventory, and just nothing happens after that. Perhaps it is a glitch. Thanks, I will contact tech support.

Since it does go into your Inventory, have a look at the walkthrough above the comments to make sure you haven't missed a task that is keeping you from going forward.

I have all 10 shot glasses but I cannot place them on the shelf in the Cuckoo's Nest Pub. I can't figure out what I am doing wrong! :-(

Check Part 1 of the walkthrough above the comments. Go to The Manor Ground, the second scene for Cuckoo's Nest Pub, and there is a screenshot of the puzzle solution.