Death and Betrayal in Romania: A Dana Knightstone Novel

When a popular author's car is suddenly buried by an avalanche, then she is rescued by a mysterious man who happens to be a caretaker for an eerie (and empty) nearby castle, you could be forgiven for thinking that you had wandered into a badly thought-out edition of Misery 2: Paul's Revenge or something similar. Instead, you have stumbled into the latest Dana Knightstone joint, Death and Betrayal in Romania: A Dana Knightstone Novel, Boomzap's latest adventure hybrid. Dana Knightstone is no Stephen King, heck, she's not even Tabitha King. She is, in fact, a best-selling romance novelist who just happens to have a unique talent — she can see and speak to ghosts. This has led to her being able to solve the mystery of whatever dead star-crossed lovers happen to stumble into her path and then plagarize their love-story for a public that just can't seem to get enough. 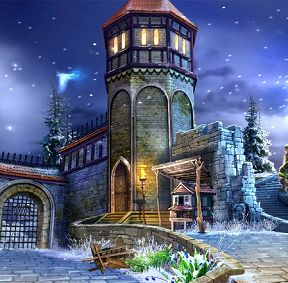 This time around it's a little more personal since the grieving ghostly Lucien keeps mistaking her for his lost love Alexandra, who was murdered on their wedding day. With the help of the ghostly dog Bandit you can point and click your way through this classic hidden object adventure to try and figure out who killed Alexandra and more importantly reunite the lovers so that Lucien will stop with the incessant "wwwwwhhhhhhhyyyyyyyyy did you leaaaaaavvvvvveeeee mmmmmmeeeeeeee!" routine. Dude, she was STABBED TO DEATH! The mini-games are mostly familiar, and seem to rely heavily on slider puzzles, but are sprinkled throughout the game in a pleasant distribution, keeping the gameplay moving along at a nice clip without bogging down the story. The object scenes are especially fun to navigate, as each is a multi-layered puzzle rather than the usual "find these 20 items on the list although you only need one" routine found so often in hidden object games.

Boomzap has once again delivered the goods with Dana Knightstone's latest outing. The scenery is easy on the eyes and the music is lush and a perfect accompaniment as yet another doomed love story blazes across the cosmos. The characters and the storyline are delightfully over the top, buried in enough cheese to drown Bucharest, or whatever Romanian city is closer to the action. Like a good romance novel, Death and Betrayal in Romania: A Dana Knightstone Novel is a perfect guilty pleasure and a tasty, cheesy treat.