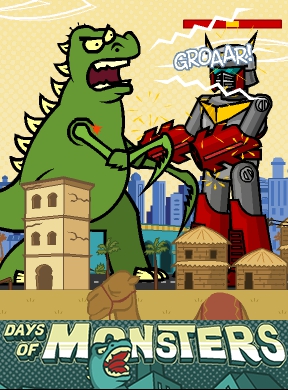 Being a bully is a bad bad thing. You should know this already, but if you want a realistic, hard-hitting example of the bad consequences of bullying, look no further than Days of Monsters. A young boy is cruelly mocked. Years later, he becomes a mad scientist and seeks to destroy the world by breeding giant rampaging monsters. Haven't we seen it all before? Haven't we all longed to live the precautionary tale ourselves? I think we have, which makes it good that Mostro Games and La Ventanita have teamed up to produce this action simulation game.

At first you control a basic reptile model of monster, but by destroying cities and earning medals for completing certain challenges, you'll earn money to research new and interesting parts for your creature. These various parts, in turn, unlock different abilities that you can use to destroy. While in a city level, you can hit the [QWERTY] or [123456] keys to control these various abilities, from the basic tail swipe to eye beams and weather control. To turn the monster around, hit the [spacebar]. There are also mouse controls to do these actions, but you'll probably want to use the keyboard, as the you'll be using the cursor to aim certain attacks. You can't just roar in any old direction you know.

All of this activity requires energy, which you get by collecting little skulls that float up from your kills via mousing over them. These little skulls also give you cash, which you can keep even if you fail the level. You beat a level at the most basic level by flattening the buildings, and the game is won when you've, well, flattened the world. 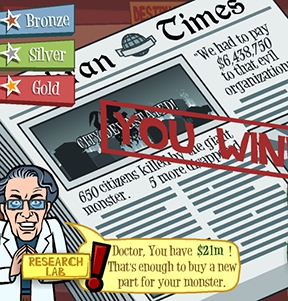 Analysis: Like many games relying on earning money to buy upgrades, the game is a bit slow to get started. You might find yourself dying repeatedly while you refine your technique and scrape together a few million here and there to buy more powerful upgrades. The medal requirements differ in the different cities, but by far the most difficult are the requirements to kill a certain number of people. Because people are generated by buildings, you need to avoid destroying all the buildings while you rack up kills... but you only get medals if you finish the city off, which requires destroying all the structures. It's often very difficult to do this, either because you hold back too much and get destroyed by the enemies before you can finish the level, or because you hit too hard and destroy the city before you've racked up enough kills.

It would have been better if it had been explained in game what the various abilities do, rather than force you to open the monster guide in a new window. That just feels like a transparent effort to get page views. I thought the paralyzing hypnosis skill was utterly useless because I thought it was intended to attack planes and it never seemed to do anything. It was only by looking at the monster guide that I realized that it's an insta-kill button for all people on the screen. There's no reason why this information couldn't have been included in a hovertext.

However, the game has a lot going for it as well. Once you get over the early hump, the game's progress goes at a good pace, and getting all the gold medals provides a late game strategic challenge. The surfer rock really adds to the feeling of directing your own 60s monster movie, while the cartoon imagery reminded me a lot of childhood sandbox play (and of Reptar from Rugrats). If you've ever taken a Godzilla figurine and stomped it around a sandbox while providing your own terrified shrieks for the GI Joes and Barbies in your wake, Days of Monsters will provide that service while sparing your vocal cords.

I agree with the analysis in the review: it's difficult to start, and no mouseover tooltips makes no sense. I also didn't like to be forced to watch the 'Meanwhile back at the base' screen every time.

However, the game was definitely fun. It would be a good game if it were to straighten out its flaws.

Test 5 working for me. Thanks!

If this helps the troubleshooting, the first 4 test pages had one error: the game's swf was "Not found".

Thanks again. You rock.
Zans

Ok, cool. Thank you for helping track down the problem!

I think the problem lies with our content delivery network. We're looking into a fix right now for it.

The problem should be fixed. The game should load for everyone now without any issue.

Definitely read the flavor text underneath each city. It will give you clues as to what bits and bobs of monster might make it easier.

Defeat the mechas easily with the most powerful vision/eye laser.
Use the freezing antennae to take out lots of airplanes and rocketment without using too much energy.
Drop chicken eggs in the early seconds of the stage when floating skulls are plentiful and enemies are few - they'll stick around and help out

I really had a blast with this game. Very clean graphics, nice soundtrack, fun gameplay. I liked that you had to pay attention to details to be sure you got all the rubble reduced properly, and the upgrades were fun too. I didn't like that I never knew what my upgrades were going to do unless I left the page (who wants to do that?), didn't like that you never knew what the badges were for the next level unless you took a long break back to the lab and map, and I really hated that all the keys for the special skills were in a row and the spacebar for changing direction. Really, with 5 up there sometimes what am I supposed to do? Take my hand off the mouse or get my thumb up there somehow? I think if they were in a cluster it would work much better. But those details don't keep me from having a good feeling from crushing tiny humans...