Lorraine has probably had better days. Separated from the rest of her crew, stranded in the alien jungles of Tavor, trapped in an ancient ruin, she's now accosted by monsters and the undead. Still, it's not all bad. Occasionally she'll encounter data-discs left by her crewmate Ridley, and various bits of equipment to give her phenomenal new movement abilities. Escape from a cursed alien tomb, find your crewmate and — if you're particularly fortunate — come out of it all with the brand old fabulous Idol of Tavor as your lovely planetary parting gift. Metroidvania-style action and adventure await you in Angril's new sci-fi platformer, Darktopia! 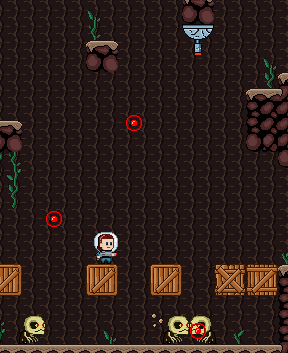 One of the first important things you'll learn about Lorraine — aside from her ability to handle difficult circumstances well — is that she can't jump due to an injury she sustains from a fall. Fortunately, you'll recover some boots off a fallen crew member, which allow her to, well, hop with [Z]. With some difficult maneuvering with the [arrow] keys however, Lorraine will soon be collecting colored keycards necessary for passing the appropriate doors, double-jumping, and even using a nifty little gadget called an Accelerator to improve her jumps even more. By pressing [Shift] while running once she finds it, just before jumping, the Accelerator enables Lorraine to boost her horizontal momentum for a full second. What that means is that if it's timed correctly, Lorraine's jumps can cross most of a whole screen even if they don't gain any additional height from it. The fun physics of this doohickey alone is enough reason to give Darktopia a try, and when combined with the double-jump the combination gets almost slapstick as Lorraine whizzes across the screen, disregarding the terrain almost entirely.

But Darktopia (which I'll always think of fondly as, "How Lorraine's No-Good, Awful Day Got Better") isn't just about the flagrant use techno-toys to violate the local laws of physics until they feel a bit sheepish and go home hanging their heads dejectedly. Lorraine eventually manages across a blaster rifle, for example. But you won't be able to just set it on Auto-fire and mindlessly laser your way out of the ghoul-infested ancient ruins, oh no no no. Either assault blaster rifles are banned in the future, or the fact that its previous owner abandoned it in a catacomb of ancient alien tombs indicates that it's a slightly inferior model, which Lorraine doesn't appear to stop to consider. Although [X] will allow you to fire (in any of your cardinal directions, by the way), each shot will heat the barrel slightly as indicated on a color gauge. That means for each shot, a cooldown period is required. And if you manage to max the gauge out to red, be prepared for a loooo-o-ong additional cooldown during which time you'll be unable to fire back. 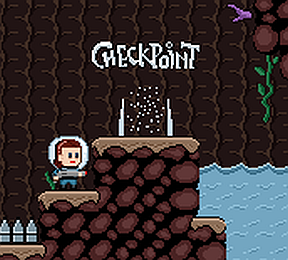 Sly level design also plays a big part in Darktopia. For all the aerial acrobatics Lorraine can eventually muster there is a distinct lack of headroom in these ruins, and much of that is filled with spikes and various other nasties. In some games, that would be annoying. In Darktopia, it's thought-provoking. It means you'll really puzzle out where you need to get to and how the heck to go about it. There will be moments you'll think you're stuck, as you can't always get back to where you started and all the color-coded doors won't open without the corresponding keycards. Don't panic! You'll eventually acquire some nifty device that will make what's impossible for Lorraine at the moment a glib reality later on. The checkpoints enable Lorraine to come back upon death to the last one she'd visited (presumably as a fully-living being rather than some eldritch, undead horror), and just reaching one will fully heal her as well. Even if you're not a huge fan of Metroidvania-style games, come for the gameplay physics of Lorraine's collectible arsenal of gadgets, and stay for the crafty level design and fun. And remember that no day has to be awful as long as you've got deft moves, some futuristic ability-enhancing devices, and a blaster rifle. Definitely a blaster rifle.

I loooove this game!

Looking good, but is anyone else having trouble changing the key mappings. I can change them but then the key I have changed to does nothing.

Ah! I did not try to change the keys. I will try.

To save yourself a lot of grief,

in the last above ground area, don't try to go to the far northeast until you get the western item. You can make it to the northeast item with a lot of fancy jumping, but it will make you want to rage quit. This is confusing, because the western item is guarded by a stone gate that you don't have a key for, but you don't actually need a key - it opens right up when you touch it.

Here's why this hurts the game:

I too am having problems with changing the keys. Nothing happens, it's infuriating as I'm currently missing a down button..

Please note: Rolling boulders DO NOT care about room boundaries. That is all.

Anyone beaten the game yet? I need some help with the final boss. Neither the gun or the bazooka seem to hurt it.

Pretty disappointing end, not worth the effort of the game.

Your weapons pas right through the boss, so you'll have to find something else in there that causes damage. It's also a useful way of clearing the zombie guys if you can get things to line up.

Changing the keys won't work.
So another game that's hardly playable on all but QWERTY keyboards.

For those having issues with the key mapping...

After changing the key mapping try quitting to the main menu and the continuing your game.

I think I may have glitched out

In D11 I died at the same time as Caleb. When I go back he is not there, no item is there either, although it still shows an item is there on the map.

Have I missed something or should I have got something from Caleb?

Hello all,
We will upload soon a new version with the key mapping feature working.

Thanks for giving us your feedback. We appreciate it very much! We're very sorry that you still found many bugs / glitches. We will do our best to fix them ASAP.

@yaddab: Yeah, we just noticed the glitch. Sorry :( We will fix this very soon. At the moment, you can refresh the page to replay the mini boss battle.

Thanks for the fix!

I'm stuck, I have all but the lower right three items, and not sure where to find them. I'm assuming one is an air tank so I can swim further, but no joy finding it. There's a couple red gates I can pass due to shortness of breath....

Can't pass, not can pass.

@Username: Have you check your map? If my guess is right, then you might find a tool for water breathing in A4 ;)

I was on the same boat as you, Username. But I just found out that Shift also works under water, even though no sparks come out of Lorraine to visually confirm it.
I was now possible to follow Angril's hint.

My map is showing and item on D2, but I can't see anything. There's a room with boxes on the top of the screen, but it's not accessible.

I remember getting one of the steroid pill thingies there. So, glitch?

Thanks for the assist, I'll go try it out now.

Finished the game. Here's a tip:

Same here, but I let it slide by because I got the life up

I finished this game yesterday, and was so pushed for time (outside of the game) that I almost gave up on the final boss. Took some jiggering and figuring to figure out how to get him. Fun game and satisfying to the twist ending!

I believe this happened because you skipped the first Steroid in B10, or the second Steroid in C14, or.. both :-|

We will fix this ASAP. Promise!

Ok so I am not great at this. simple ?
where do you find key cards I keep getting stuck

This is how you kill the final boss:

Give bazooka shots on those orange jelly-looking phantoms when they're near the boss, when they explode, they will hit the boss

I stink at these games, but I just want to get past C4 on the map... can anyone help please?

I get a glitch every time I use the first key - the screen doesn't stop shaking and everything is frozen. I've tried up to this point in Safari, Chrome and Firefox and the same thing happens. Sorry! It's a real shame as I love this medtroidvania kind of game :-(