In addition to being a mouthful, Dark Tales™: Edgar Allan Poe's The Mystery of Marie Roget is the name of ERS Game Studios' creepy new hidden-object adventure. You and your companion, the insufferably smug Dupin (why couldn't it be Dale Cooper... just once?), are called in to investigate some strange happenings plaguing a newly married couple. Glass has been shattering all on its own, young Marie has fallen into a depressed fugue and won't tell her husband why... oh, and there's the sinister skull-laden magic mirror, too, making it rather loosely based on the original tale to say the least. You and Dupin (ugh) quickly discover there might be more going on than simple superstition, and it seems like this sleepy little burg is hiding more than its share of dark secrets. And crazy puzzle mechanisms. And elaborate gate locks. And evil one-eyed crows and cats. How does anyone get anything done around here when you need two puzzle pieces, face cream, and an old candle just to get into the local bakery? Though perhaps the scariest thing about this game is... comic sans is the default font. AAAAEEEEEEIIII! 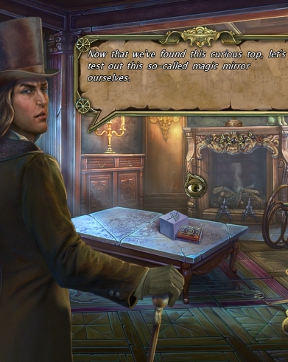 The Mystery of Marie Roget gets weird in a hurry, which is actually a mark in its favour. If more games started off with people morphing into red-eyed ghost cats and everyone else being largely ambivalent about it, the world would be a better place. Since the source material was a rather cut-and-dry mystery, it's great to see ERS Game Studios having fun with it and taking it in different creative directions. It's a little corny, sure, but using the magic mirror to divine information from clues is a nice idea that jives well with the rest of the game's creep-tastic atmosphere. Suddenly shattering portraits, suspicious people cleaning knives in alleyways, and moody ghosts abound, all rendered in the developer's signature style, whose character models and environmental artwork work particularly well with this gloomy Victorian theme. The story is initially a little confusing due to the way strange things just sort of happen, with expository cutscenes being relatively few and far between, but it also feeds into the air of mystery and intrigue the game is cultivating as it starts setting the stage for blackmail of all kinds. An air that's ruined every time Dupin opens his mouth. Having a smug character who allegedly follows us around all the time and only pops up to make obvious statements is as annoying as ever. Seriously, look into a different partner next time, could you, Diane? 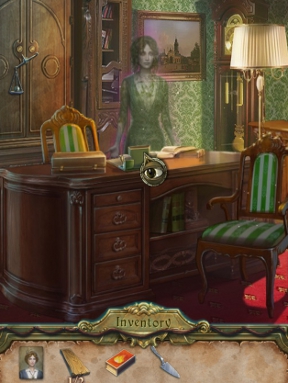 Like most recent game releases, here you'll be able to customise your difficulty down to the length of time it takes for the hint and skip functions to recharge. The game is practically heaving with puzzles big and small, and by and large the uses for items make sense. (... mostly. Why destroy a poster only to have us piece it back together if the thing destroying it wants us to find it and take it?) It feels a lot better put together than some of the other titles in the series, and manages to weave a much more compelling story to boot. Sadly, like a lot of casual games, The Mystery of Marie Roget is burdened by obnoxious backtracking and busywork to pad the length, and the click detection for picking up items in hidden-object scenes seems a lot more finicky than usual. Still, despite some rough edges to its presentation, and the fact that it doesn't necessarily pull out any new gameplay tricks you, Dark Tales™: Edgar Allan Poe's The Mystery of Marie Roget is still a solid adventure with just the right amount of twists, turns, and fountains mysterious weeping blood after the sky turns an ominous red. Just like grandma used to make,

"Though perhaps the scariest thing about this game is... comic sans is the default font. AAAAEEEEEEIIII!" Why are you a comic sans hater?????

Hate is a strong word. I just think it's a little silly that every character in this game, from the aristocrats to the police, are using comic sans to pen their important documents, love letters, diaries, and so forth, and it jars alongside the rest of the game's style. :)

LOL I loved this review, especially your comment about Comic Sans! That font makes me want to scratch my eyes out as well. Gaah!