There's something rotten about the little town of Lumineux. When city officials start dropping like flies, you and the fan-favorite Detective Dupin are called in to hunt down the killer, a mysterious fellow known only as the Red Masque. But are things really what they seem? The Red Masque is a murderer, but is he out to destroy Lumineux, or help rebuild it? What's the real disease infecting this town? Such is the dilemma of Dark Tales: Edgar Allan Poe's The Masque of the Red Death, the latest installment in the hidden object adventure series by ERS Game Studio. 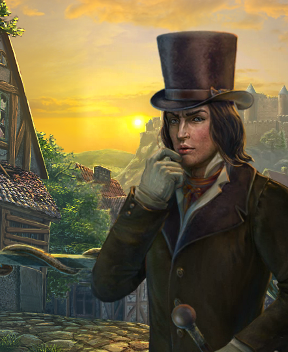 If you've ever played a hidden object adventure before, you probably know what to expect in terms of gameplay. Explore Lumineux with your mouse, traveling between areas with the arrows, picking up any items you might find along the way, and using those items in the right location to get a different item or unlock a new area. Occasionally you'll come across a puzzle to solve or a hidden object scene to search... and if this isn't sounding familiar, the game provides a helpful tutorial at the start. What's new and notable here is that The Masque of the Red Death allows you to make up your own mind about the story, literally putting Justice's scales in your hand. With every important piece of evidence, you receive a Sphere of Guilt. Do you add weight to Mayor Prospero's wrongdoings, or to the Red Masque's? Whose guilt is greater? 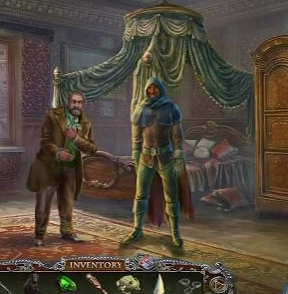 As an adaptation, Masque of the Red Death is, to put it kindly, less than faithful. If you've always loved the story and you're looking forward to playing a game about it, this might not be the game for you. (Seriously, where's the plague?) Fortunately, this Masque of the Red Death is an interesting story all on its own. There isn't always enough time with each character to know them and care about them as much as the game asks you to, and many players might find the game's central question to be a very easy choice. This is also much more of a game for the hidden object fans than for the puzzle-solvers. The hidden object scenes have variety and are full of creativity and style... and then the puzzles, half the time, feel like busywork. If you like extra content, Masque of the Red Death is full of it— there's an adorable kitten to play with, a bonus chapter, and even some photographs of the development process— but sometimes it feels like the energy spent on that extra content could have gone toward fleshing out the characters and puzzles a little more.

Still, at least for me, the proverbial scales tip in Masque of the Red Death's favor. Was it perfect? No, but it was an enjoyable few hours, and I appreciated how forming my own opinion was a central part of the game. Try the demo— perhaps a trip to Lumineux will be right up your alley.

Currently, only the Collector's Edition is available. It includes wallpapers, an extra adventure, the soundtrack, screensavers, and a built-in strategy guide. Remember that Big Fish Game Club Members pay only $13.99 for Collector's Editions (or 2 club credits), and collector's editions count 3 card punches of 6 total needed for a free game.