It's been said that people create because they're not satisfied with the way things are; they feel that the world needs more of 'them'. Well, if Dark Scavenger is any indication of what Psydra Games 'is', then I am eager to have more! In the team's darkly-humored point-and-click adventure game, you are an alien who has to forage through a planet looking for a source of energy to power your failing ship. With combat and mystery at every turn, this game will have you humorously pointing and clicking your way through the storyline. 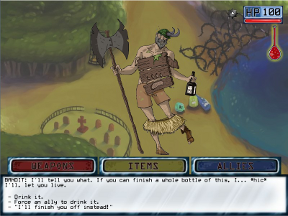 You find yourself floating through space when you meet a strange entity that threatens you. This creature seems very alien, though who's to say you yourself aren't more so. After your interaction, you awake in a ship with three companions. One of them informs you that you're a dark scavenger. What exactly is that? Well, you scavenge for energy... and I suppose you're darkly colored? With the ship running low on power, it's up to you to venture out onto the nearby planet in search of a mysterious force that should be able to help you and the other three aliens to continue to travel. Of course, leave it to you to walk into the middle of a multi-faceted war with all sorts of strange beings.

Dark Scavenger is completely controlled with the click of your mouse, from navigating the menus to exploring the environment and carrying out the turn-based combat. Each scene is a top-down view of the area and hovering your mouse over a hotspot highlights it in red. Clicking such areas gives you a brief description which can lead to a multiple choice interaction. Make a decision, and if you're lucky, you'll not only come out alive but also with some loot. Exiting a screen sends you to your ship where you can choose which companion you want to turn your item into something valuable. Each one does something different, and deciding which option for which item is part of the fun. No matter what, though, you can only repurpose one item per visit, forcing you to strategize based on your current needs. 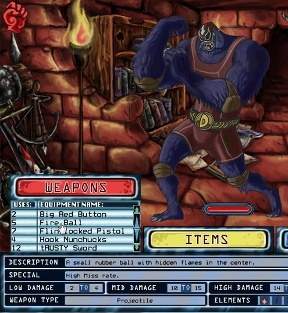 Analysis: If you're not already in a good mood when you start playing Dark Scavenger, it's sure to put you in one within minutes. Whether you're giggling at the silly inhabitants of the planet or shaking your head at your cuckoo-for-chocolate-cereal shipmates, it's a game you can't take too seriously. What makes it even better is how well Psydra Games was able to seamlessly weave a point-and-click interface with open item creation and combat that, while increasing in difficulty, never creates a situation where grinding is necessary (or possible, for that matter).

Where the game seems to falter is in the storyline. After being thrown into a crazy situation through the prologue, you then have to explore a strange world with many different unfamiliar peoples and creatures. It starts to become work keeping up with everyone, and that can prevent you from really connecting to the protagonist and, ultimately, the game as a whole. Thank goodness for the funny, recurring side characters (Come on, a giant, grinning snake who's wrapped himself around a poor soul so he can hop around?) who remind you to just laugh once in a while.

Dark Scavenger is a dark, funny game that isn't afraid to use an NPC's pain for your chuckling gain. With five lengthy chapters and dozens of rooms to explore, this game is sure to keep you occupied for hours, if not days. And with so many possibilities in how you can handle a situation or the many items you can craft, replayability is definitely high. To repurpose the exit dialogue box for my own use: Are you sure you won't try the demo? You're really close to a fun game!

I like the demo a lot and I will probably buy the game, but had a question for someone who has played farther into it--you use up a lot of stuff to gain new stuff--if you are constantly getting new loot, do you stay ahead of the attrition? I definitely like that aspect of the game, just was wondering if you could eventually lose just for running out of items to use in the adventure.

dsrtrosy,
Your items regenerate at the beginning of every chapter. I never had a problem with running out of items.