Last year, Blue Tea Games gave us a not-so-happily ever after look at the legend of Sleeping Beauty in the game Dark Parables: Curse of Briar Rose. Players took on the role of a fairy tale detective who brilliantly solved the case. You know how it is when you solve one supernatural mystery, your name gets passed around. In the Black Forest of Germany, the chancellor's daughter has mysteriously vanished in an area where, legend has it, the Frog Prince claims those unwise enough to wander into his territory. (Her bodyguard disappears too, but he's treated more like an afterthought.) Who would they call but you? You'll need to find hidden objects and solve puzzles to rescue them in Dark Parables: The Exiled Prince. 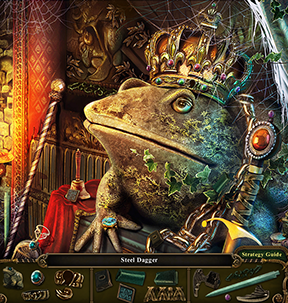 If you've only ever played regular hidden object games (say, finding a banana, a wallet, seven roses etc in a bathroom that looks like an antiques store exploded in it), the Dark Parables series might throw you for a bit of a loop. You're searching for item fragments rather than intact items in each scene, with each completed hidden object scene rewarding you with an assembled object. These assembled objects will then be used as part of the adventure gameplay. Some people refer to these games as FROGs for "fragmented object games" (as opposed to HOGs which are "hidden object games"). At first glance this seems like an attempt to improve realism, but FROGs have their own set of problems in that arena. This is still a genre that is best accepted on its own terms, without asking troublesome questions like "How come I can take a bunch of metal pieces and reassemble them into a hammer, but I can't figure out some way to break this china urn without using said hammer?"

In addition to assembling objects and using those objects to solve adventure-style puzzles, as with all nefarious supernatural villains, rather than putting his valuables in a safe deposit box, the Frog Prince favors the "puzzle that can be solved in five minutes" approach to home security. You'll swap objects into the correct order, manipulate images and machinery, attempt to assemble arbitrary groups of objects, and more. If I ever become an evil villain of a video game, I'll set up a puzzle at the entrance to my lair's locked door. Anyone who correctly solves the puzzle will receive ten thousand volts. Add that to the evil overlord list, please.

As the last game did, you have the ability to collect 20 "cursed objects" as a bonus. The cursed objects are scattered throughout the game map and may not be activated the first time you visit a room. They flip back and forth between two equally suitable objects for the scene, for example, if the game had a scene taking place at a cafe, the object might switch between a coffee cup and a sugar bowl. When you notice one, click on it to collect it and also to increase the speed your hint meter regenerates. Collecting all twenty gives nothing but a sense of satisfaction. 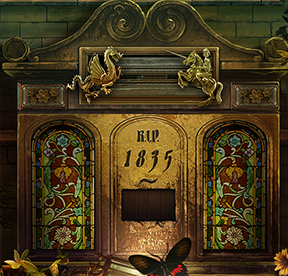 Analysis: The Exiled Prince is strong on drama and generally goes for whatever plot development would have the strongest emotional impact, skimming past any logical gaps, inconsistencies, or outright contradictions. By the end of the game and bonus game, rationality-focused players may be scratching their heads over many of these plot holes. If that kind of thing tends to drive you crazy, this game may not be for you. If you were to put the key events of the game down on paper, you'll find it doesn't make a lot of sense, but the game has emotional cohesion. Pain, loss, grief, fear, resentment; these things mean a lot to the game. The game's translation issues have improved massively over the previous game, which may soothe the writing champions somewhat.

Despite being a "dark" game both emotionally and atmospherically, for the most part the game avoids the pitfall of having its hidden object scenes too dark to distinguish objects. Objects can indeed sometimes be extremely difficult to find, but this is generally when a fragment is hidden in a place where it's literally impossible to distinguish from the surroundings. For example, in one scene, ivy leaves were hidden in A POT OF IVY. I actually said out loud "Really, game? Really?" I used a hint to find them and I just stared at them for a minute after using the hint. They looked identical to the surrounding leaves! That particular example crossed the line into full-blown "unfair" in my perspective. That was the only incident that was quite that bad, thankfully. The hint meter refills quickly, even if you haven't been collecting cursed objects to increase its speed.

The game has some great puzzles and a good variety of them. My favorites were the ones that were almost like point-and-click webtoys, where you basically just push and pull and experiment until the device does something interesting that seems to be towards your target. It gave a kind of freewheeling feeling that perhaps fit the game's emotions over reason style, and the gorgeous, detailed art really shone in those puzzles.

Improving on its predecessor while preserving its strengths, The Exiled Prince shows that Dark Parables is on track to become a very strong series, and with a third game already in the works (the bonus game in the Collector's Edition is in part a sneak peek), hidden object adventure fans have many happy hours ahead of them.

A Collector's Edition is also available. It includes a bonus adventure and extra puzzles to solve. Remember that Big Fish Game Club Members pay only $13.99 for Collector's Editions (or 2 club credits), and collector's editions count 3 card punches of 6 total needed for a free game.

The numbers indicate the spoiler numbers in which the object is mentioned.
You will find the object in the first location mentioned and use it in the second.
Prologue

4. Starting Point, Way to the Cottage

19. Garden Entrance/In front of the Palace

21. Puppet Theater of the Swanlake Princess

23. Puppet Theater of the Swanlake Princess

26. Place in front of the Palace

Seen from left to right and the buttons from 1-4:

30. Place in front of the Palace/Palace Hall

Screenshot
NOTE: Only when you go through this door into the caves will the vines, normally blocking your way, be gone. Using the way through the garden will get you stuck in the caves again!

The numbers indicate the spoiler numbers in which the object is mentioned.
You will find the object in the first location mentioned and use it in the second.
Prologue

4. Starting Point, Way to the Cottage

19. Garden Entrance/In front of the Palace

21. Puppet Theater of the Swanlake Princess

23. Puppet Theater of the Swanlake Princess

26. Place in front of the Palace

Seen from left to right and the buttons from 1-4:

30. Place in front of the Palace/Palace Hall

Screenshot
NOTE: Only when you go through this door into the caves will the vines, normally blocking your way, be gone. Using the way through the garden will get you stuck in the caves again!

I absolutely loved this game - I thought the graphics were wonderful and each object that the player has to construct is beatiful - even a fishing net early on in the game was colourful and seemingly encrusted with jewels haha. I didn't pay much attention to the logic of the game, as a lot of these games lack in that area, so I found it wholly enjoyable :) there's also an in game walkthrough if anyone gets stuck, which was quite helpful any time I found myself momentarily lost. Overall, 4/5 :)

I was very impressed with this game. The story was interesting enough to not make you bored and the gameplay was very solid. The puzzles were pretty unique and some were rather challenging. It was a nice touch to look for the fragments of objects too, instead of the easier to find whole objects. My favorite part though were the scenes and the atmosphere. Every step you take was like walking into the fairy tales portrayed in the story. The scenes were so beautiful and detailed, I didn't mind having to retrace my steps to find more items. I would definitely recommend this game!