"Everything was beautiful at the ballet, graceful men lift lovely girls in white..." For those who are fans of the art, ballet is a glittering world of glamour, intrigue, music, and movement. Fortunately you are a fan, especially since your sister is making her big debut in a starring role at the local ballet. On the way to see her dance you encounter a few problems however, like the fact that she is missing and a ghost is haunting the theater, amongst other things. If that sounds like the intro to an adventure hybrid game, well, it is. In fact, it is the intro to Eipix Entertainment's latest hidden object offering, Danse Macabre: The Last Adagio. 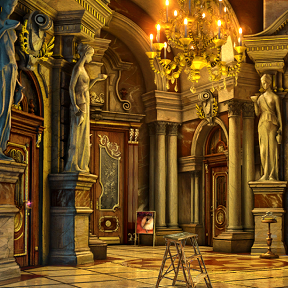 There is a story here, something involving a kidnapped sister, suspicious characters, and a jealous lover who burns down an entire theater of people in a fit of rage. You know, as you do. What's important is not so much the story as the gameplay, which Eipix once again brings in spades. Every inch of Danse Macabre is packed with puzzles, games, hidden objects, and the like. Hidden object scenes feature a multitude of interactive options, puzzles are challenging and fun, and even something as simple as picking up objects to use later can have extra layers of action. Of course there are secret items hidden in every scene as well, and the option to eschew hidden object finding altogether for the fast and furious fun of marble popping.

Everything we've come to expect from Eipix is present in spades, from the lovely changing cursor and controls to the interactive map, helpful hint features, and customizable gameplay. Yes, the whole "damsel in distress" and "ghosts haunting a theater" and even "crazed lunatic slaughters a whole bunch of people because he misunderstood something he saw/because he's an insane idiot" plot points have all been done before, but rarely with such style and grace, chock-full of enough gameplay to keep the player interested for hours on end. Everything is most definitely beautiful at this ballet, so dive right in!

Note: Danse Macabre: The Last Adagio is currently only available in a Collector's Edition, which includes wallpapers, music, animations, concept art, extra gameplay (including both a new adventure and the ability to replay each and every hidden object scene and mini-game), a built-in strategy guide, and more. Remember that Big Fish Game Club Members pay only $13.99 for Collector's Editions, and collector's editions count 3 card punches of 6 total needed for a free game.