In the desert land of Ecta, tongues are parched and cities are wasting away for the want of water. Only one man controls the water... er, well, one walrus... and that selfish jerk, Walrus King (his self proclaimed title of "king" is debatable) is refusing to give any out! The true Queen of the land sent out her loyal engineer, Dame Celeste, to try and talk some sense into the Walrus King. Short story even shorter, it doesn't work and the ton of blubber falls in love with you, and throws you in the dungeon as soon as you refuse his attempt to woo you. Of course, he forgets you're an engineer and you have maps to his entire mansion. After that the name of the game is stealth. In Adjective Animal Studios' Dame Celeste you get five in-depth levels of sneakiness. Dress up in disguises, dodge the vision of the guards, and hide inside bushes and suits of armor alike in this highly difficult game. 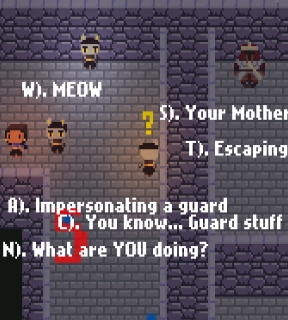 There is a lot going on in this game... not only are you to be stealthy, but there are water droplets to collect for your people, conversations to partake in or eavesdrop on, and the first four levels have articles of clothing to find and use against the enemies. Wear what they are wearing and the light glow that represents their vision field diminishes slightly. It's hard to tell, but in later levels you'll realize how much it really does assist you. Being stealthy isn't always an option, especially if you're attempting to collect all the water, but thankfully the minions of the Walrus King are lazy and if they can't catch you fast enough they'll call out a question. Your screen will be flooded with replies, dancing around and bouncing off each other and you only have about 15 seconds to select the right one. It's an effective way to let you experience the rushed panic feeling Dame Celeste must be feeling at that time and gives you a different way to play.

The most frustrating thing, however, is that while it is an awesome, adorable, clever, charming game to play, with its top-notch story and its wonderful graphics, it has some obvious blemishes. Some of the issues are that the difficulty selection on the front menu doesn't seem to change anything, AI enemies can get stuck, you can't go back and play levels, and there can be some lag due to the large maps. None of these make the game impossible... heck, I'm terrible at stealth games, but I was able to complete this one. Still, even with these major oversights Dame Celeste is a diamond in the rough, so don't be scared away. Every little success sends the endorphins running and with the witty writing and unique story-line with its tongue-in-cheek humor you'll feel satisfied till the very end when you'll be sad it's over.

It seems that keys aren't working: i can't walk or call menu!

Both WASD and the arrow keys work fine for me in Firefox! Have you made sure your browser and its plugins are up to date?

Game works okay but that last save point thing can be a bit glitchy and often takes a while to let you start moving again.

Some of the guard paths are a bit too short.

Expect to be caught, a lot.

Is it possible to mess up irreparably in this game?

I met two of the thief sisters while dressed as a guard, and they thought I was a guard instead of someone sent by their sister. Do I need to restart the game?

@Camille
No, you don't have to restart.

Some of the sisters do not give you sneaking advice. Even if you had gone up to them wearing something else, they still would have called you a guard.

Intermittent control issues and only getting about 2 seconds to answer questions. No thanks. Very frustrating to try over and over and over...

I seem to have found a way to avoid the slow glitch when reappearing at a check point.

When a guard catches you, he'll have something to say. Press space to close the dialogue box, then immediately press M to open the menu. If you do it fast enough, the menu will be open when you reappear, and for some reason it counteracts the glitch.

Any clues how to get down the corridor with the four guards in?
I'm guessing I need a guard shirt but no clue where to get one. I gave the key to the person in cell & got trousers.
Just need the shirt.

This was truly one of the most INFURIATING games I have ever played.

If I have to see

one of those shark ladies say: "Excuse me fellow lady of the court-Wait! You're no Courtesan!"

ONE more time, i'm going to have to resist the urge to throw my laptop against the wall!

Still, something keeps me coming back.

I love how getting a complete outfit is absolutely no help at all to Dame Celeste, but let Superman put on a pair of glasses and he's a master of disguise.

Those shark courtesans are the most difficult to elude once they've spotted you. I've been caught more often than actually managing to engage them in conversation.

I have managed to determine the correct responses for the guards and the chefs, though:

Now, if Dame Celeste herself could run a little FASTER....

Saviour-V bows, before teleporting out as usual...

> Dora— You're stuck in the slammer, but if you're sneaky and creative it doesn't have to stay that way in this funny, engaging stealth platforming puzzle adventure. Knock out guards and hide their bodies, snatch keycards, steal uniforms, and more!  ...

> HopefulNebula— Dark clothing? Check. Flashlight? Check. Someone else's house? Check. Checklist? Check. Gold bar? ...Working on it. Even if you don't find it, you're still The Very Organized Thief in this unique stealth/puzzle game.  ...

Nothing to Hide (Demo)

> Dora— Now available as an expanded demo, Nutcase Nightmare's "anti-stealth" puzzler imagines a future where EVERYTHING is public... or else. Use security eyes to make sure you're always under surveillance, since only bad people would ever want otherwise, and guide runaway Poppy on a journey of discovery and darts. Lots of painful darts.  ...

> Tricky— Alright, let's make sure we've got everything: Black and white stripped shirt? Check! Domino mask? Check! Lock picks? Check! Green toque? Check! Anti-heroic sense of morality that makes you more than happy to lift some cash from the unfriendly neighborhood mob boss? Oh, you'd better bet that's a check! It's Bob the Robber, new puzzle platformer from Flazm. All you footpads out should be prepared to burgle until the whole burg is burgled. Robble robble!  ...