Nothing to Hide (Demo)

Please note that this game received its rating for mentions of child abuse and bloodless cartoon violence.

Last November, we looked at the prototype for Nutcase Nightmare's intriguing and sly "anti-stealth" puzzle game, which centered around guiding our heroine through a series of darkened mazes while always making sure she never roamed out of sight of the watchful eyes of the sentries. Now, Nothing to Hide is back with a demo, and some big changes. Our heroine now has a name, Poppy Gardner, and as the game begins she's running away from home. Not because the stifling security and ever-present all-seeing eyes are getting to her, but because she's worried her increasing inability to nail a smile on her face is going to hurt her father's Popularity Metrics in the upcoming un-secret ballot election. How will she handle being able to have her first ever private thought? Is she prepared to start thinking and acting for herself? 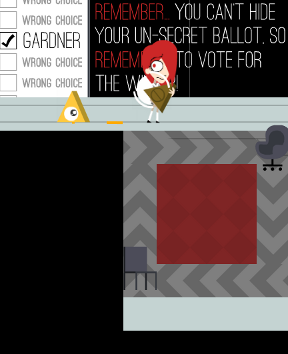 To play, use [WASD], the [arrow] keys, or click to move Poppy. The object is to get from one end of each level to the other, while always staying within the sight lines of at least one of the posted triangular security eyes. Their field of view is marked on the ground with moving horizontal lines, and eventually Poppy will be able to pick up and place them with the [spacebar] to move them around. Wander outside their view for longer than a second or two and you'll be plugged full of tranquilizer darts and sent back to try again. After all, only a criminal would ever want to be outside the view of the government at all times for any reason, right? If you have nothing to hide, why should you care if you're being watched? Creepy? Yes, and that's the point. Subtle? Not really, but it works.

The game deals with the concept of privacy, of course, and how far is too far when it comes to our increasingly claustrophobic and invasive surveillance in the US. Nothing to Hide might be perhaps an extreme representation of that, but it does illustrate how restrictive and oppressive that extreme is. Poppy is a nervous, twitching wreck from having every aspect of her life kept public, and the security system doesn't care that she's a law-abiding teenage girl... it's going to plug her full of darts like she's the biggest, meanest criminal around if she so much as puts a toe out of line, even accidentally and with no ill intent. The demo is a short eight levels, not including the opening and closing cutscenes, and does a solid job of introducing enough new elements such as the moving walkways and blue trigger eyes to keep you engaged. A few of those stages do feel extremely fiddly, however, with only a split second or hair-width for error, but if you get stuck, you can use the level select from the pause menu to skip ahead.

Nothing to Hide is also up for funding until March 12th, and with the developer considering the demo as "less than a tenth" of what the full game will be, it's got a long road ahead. The game is also open-source and un-copyrighted in a bold move to prove its title. Games that are willing to tackle serious issues are worth taking notice of, however, and with its fantastic atmosphere and unique design, Nothing to Hide's demo is definitely compelling and designed to make you think.

Play Nothing to Hide (Demo)

"He must've picked up the only iEye that was looking at him. Glad I've never done that."

Wow. It takes a special game developer to poke fun at your own players like that.

...didn't help that I did exactly that one or two levels later.

I hope there is a option to mute the music...

...Check that. I didn't do that one or two levels later, I did it later in the same level.

The demo doesn't work in Firefox.

This game has already exceeded my expectations from the first demo. It's fantastic.

There are still a couple issues though. The minor one is that the music on the the title screen cuts off at a weird spot before looping. The major one is that the girl still walks too slow. There should at least be a button to hold to run. One or both of these issues could be due to my computer being old and slow though.

I played and reviewed it in Firefox, so I can confirm it DOES work in Firefox. :)

I didn't see any problems with her speed, given that basically everywhere I needed to go was right by me. So it might just be your computer.

YESSS. I WANTED TO PLAY THIS GAME LAST YEAR WHEN THE FIRST DEMO THING CAME OUT BUT FOR SOME REASON MY COMPUTER DIDN'T LIKE IT BUT NOW I CAN!!!! :D

And I have to say, it is VERY intruiging. I like the way the small cutscenes are in a Facebook-ish style; for some reason it's just very unnerving, how she's 'posting' everything. It's also worth mentioning that the way you can 'share' the game on Facebook and Twitter when you pause it only adds to the 'what privacy do we really have?' feel.
Even though I have the feeling Poppy might be a little bit...crazy, I really like her as a character. She is very intriguing, and it's a very nice twist how she's so paranoid she wants to stay IN the public eye, instead of out of it. However, I'm not quite sure I can trust her-

I think it's because we don't quite get to see her face on the very last shot of the end cutscene. It's quite disturbing when you feel you can't trust a character you're playing as. I like Nobody quite a lot too, even though we've only seen about ten seconds of him, and I hope we get to play as him later on in the game, see his side of the story.

The iEyes were cute and yet slightly scary, as they should be, and I like the lines showing you where exactly their field of vision is. However, I think there should be some tiny hints if you get stuck, since moving them around can be quite fiddly at times, especially if you don't know what you're doing. I also agree that there should a run feature, simply because lumbering over to go and get that iEye you were holding all over again can get a bit tiresome.
The game is incredibly creepy, and does what it set out to do well. The way you see all the billboards basically brainwashing you is extremely disturbing, saying that 'there's only one right option'-and then you realize that the game is doing that to YOU, too, because there's literally only one way to beat the level. It's pretty creepy.
All in all, even though it was very hard, I really enjoyed playing this game, and I can't wait for the full version c:

I played the levels until the last one when

I reached Nobody with the revolving sidewalks. Pepper just froze there after that. I couldn't skip the level nor select the ending.

Is this a bug or something?

This is great news! I was hoping something would follow up on that demo.

This started out annoying, but the more I played, the more it made sense...you never know how much they're paying attention to you.

@argyblarg: I think you have longer the closer you are to a sight path. So picking up the only eye that can see you is an auto-fail unless there's another one close, while slightly stepping out gives you about a second to get back in (or dash to another, as should be noted).

Tiffany Sy, sounds like a bug. You should see the final cutscene at that point.

Pretty sure that length of time out of direct line of sight isn't what's happening there. Pretty sure it's distance. You can spend as much time as you want in the red 'alarm' zone juuuuust outside of iEye sight, but if you go even a few pixels too far out of sight, you get tranq'd.

All I get with the browser version is a black screen and the download version crashes before it even gets started up. :-(

Sorry to hear that! I can say that the game loads and plays fine for me in both Firefox and Chrome. Please try clearing your cache, make sure your browser is updated and not blocking anything, or try a different browser. If you're still getting black screens, you'll need to contact the developer with your system specs!