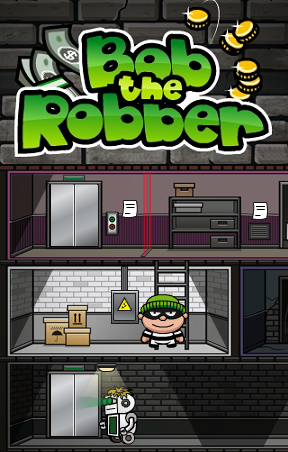 Alright, let's make sure we've got everything: Black and white stripped shirt? Check! Domino mask? Check! Lock picks? Check! Green toque? Check! Anti-heroic sense of morality that makes you more than happy to lift some cash from the unfriendly neighborhood mob boss? Oh, you'd better bet that's a check! Such is the checklist of Bob the Robber, star of the new stealth puzzle platformer from Meowbeast. All you burglars out there in the burg should get ready to burgle til there's nothing left to burgle. Robble robble!

Move Bob around the heist location with the [WASD] or [arrow] keys. The goal is to gradually make your way to the goal and back out again, without being spotted too many times by any of the various forms of surveillance. Locked doors that stand can be opened with lockpicks by holding [up], or by inputting the proper numerical code. Likewise, laser grids can be disabled by holding [up] at the proper electrical box. Extra cash can be found by searching the scenery with [up]. Robots, cameras and security guards stand in your way and will turn from green to yellow to red if they catch you in their line of sight. You'll automatically slink into available shadows, but get spotted for too long and a siren will sound that will keep everyone on edge for a bit. Too many sirens and you're looking at hard time in the big house.

Bob the Robber undeniably feels like stripped-down version of Yahtzee's Trilby: Art of Theft. Then again, Art of Theft felt like a stripped down version of Thief and Out of This World. Perhaps it is pointless to debate what robbery game stole what from who: at least they're swiping from the best. That said, with its cartoonish graphics, intriguing level design, and bouncy soundtrack, Bob the Robber has an infectious sense of fun that keeps you smiling. It's not a perfect crime: the controls are a little wonky, and, with only five levels, things start wrapping up as soon as it gets started. Overall, though, you should be happy to let Bob the Robber steal a bit of your afternoon.

Nice difficulty curve. Although, the first time I had to move sideways onto another screen, I was a little thrown.

Good game in general. There were a few times when I couldn't figure out where Bob went after entering an elevator. Would be nice if it highlighted the door you would be going to so you could tell what room you would be entering.

Other problems that could stand to be fixed: 1. the icons on the top of the screen sometimes obscure security cameras on the ceiling. I know I've been accidentally set off the alarm thanks to a camera I couldn't see, & I bet I'm not the only one.

2. I unlocked a door that served as a shortcut between the second room in level 5 & a room further in the level, but when I went through it the door acted like it was still locked when I tried to go back, so I was left with no option but to get back to where I was the hard way.

Apparently 288 seconds, $559, and no alarms isn't enough for 5 stars on level 4? I don't see how I could have moved much faster, and I don't think I missed searching anything...

(Am still very much enjoying, though. Thanks, Flazm!)

Parmeisan, as far as I can tell the amount of starts only depends on the amount of money, so I'd wager that you have missed searching a place. Have you checked the toilet?

A note by the second locked code door in level 4 (basement, right above the dog) says to check "those computers" for the code, but I'm not seeing any computers in this level besides the one in the far upper left that supplied the code to the earlier door. Is this a bug or am I just being daft?

I'm not sure it does - at least, my attempts to get full stars on all the rest always finally succeeded when I got no alarms, so either that's at least a part of it, or I always just happened to find everything those times.

I'll try again tomorrow. Playing around and trying to figure out what's necessary to get full stars should be kinda fun, actually.

@nobody - "those" computers look different. There's four little blue monitors in a room with a guard and a circuit box. (The room directly to the right of the one with the note you're reading).

@ThemePark - you may be right, as I did realize that after a couple of failed attempts at 5 stars, I started resetting as soon as I got an alarm. But I just tried again, concentrating way more on finding money than anything else, I turned every stone - I even thought I discovered that guards sometimes have money (I had checked the item behind him before, but maybe I just wasn't standing in the exact right spot?). I had $5 less than my other attempt! I think maybe my problem is that some items that really seem like they ought to have money, but no matter where I stand I can't find any. I really don't think there's anything I haven't tried looking in.

Unless there's a way in the upper-left corner of the house to get into that attic-like room with no doors?

Ok, I give up. Level 5 is full of parts where you step into an elevator, the screen changes, and you literally cannot see where the heck you ended up. That plus the hidden cameras just made it too annoying to try to finish.

Note that you can pick the pockets of anyone you thwack. (Well, ok, not the dogs.)

It has its set of flaws.. but it kept me playing until the end! Then again, I'm a sucker for stealth/robbery games, so I may not be a good parameter.

An enjoyable little puzzle game. In a few places, security cameras were covered by the alarm lights at the top of the page, and it does seem unusual for elevators to travel diagonally through a building. I'm not sure if these things were thrown in for the extra challenge or if they were just overlooked in planning the layout, but they definitely made the game a little more difficult.

I cannot get past level 2. I need the door code! Good game though.... it would be complete if you gave me your cheeseburger!!!

What a poor mentality. So these games are robbing each other, but all the other games in the world aren't? Every single game would be based off the very original one in each category.

Drop that poor thinking and accept something called GENRES once and for all, in every single type of game, no matter what.

Also, I hear the main character saying "oh shit" whenever they get caught, which makes your Green game rating inadequate.