How great is it to be a detective? You wear expensive suits, your hair always looks perfect no matter what angle you're seen from . . . oh! And of course you get to utilize everything from hidden objects, spot-the-difference, fun puzzles and more to catch your man! And if you do it by playing one of Big Fish Games' newest releases, CSI: NY, you get to do it all with a substantially decreased likelihood of getting shot! And hey, who doesn't like not getting shot? 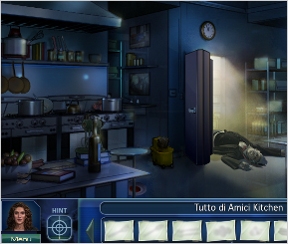 Based on the show of the same name, CSI: NY puts you in the gumshoes of several detectives as they attempt to solve four new cases set in the nitty-gritty of New York. You'll explore every place from alleys to penthouses, and encounter a wide variety of colourful characters — some more friendly than others. Fans of the show will recognise familiar faces here, but if you haven't seen it before, you won't be missing any information needed to enjoy the game. The simple point-and-click interface is friendly enough to pick up on your first try, and the game is adept at pointing you where you need to go within each scene without it feeling as though you're being spoon-fed information.

CSI: NY features a lot of different gameplay elements, all featured as little minigames you need to complete to advance the story. While hunting for hidden objects will surprise nobody, you'll also find yourself dusting for prints, reassembling shredded evidence, constructing portraits of suspects to help identify them, and more. While most of them will take only a minute or two, which helps keep the game moving at a brisk pace, others require a bit more thought. Bear in mind, however, that in addition to featuring some rather elaborate murders, you'll also wind up occasionally having to get a little closer to bodies than casual gaming generally requires. The last "episode" is perhaps the most explicit in terms of violence and content, but it's nothing you wouldn't see in a 9 PM television slot. 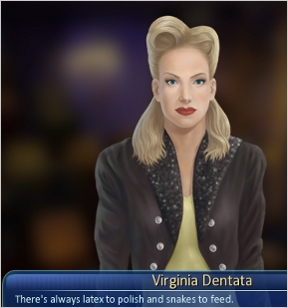 Analysis: Never having been a fan of hidden object games, I was pleased that the objects you were expected to find at least had some business in every scene. But the designers' thoughtfulness ended there; you need to identify by silhouette, and in more than one case I was left grimly clicking through row after row of identical items trying to find the one that was relevant to my case. And while for the most part the forensic portions of the gameplay are fun and varied, there will definitely be one or two you'll hate... and wind up having to perform back-to-back on at least one case. It feels at times that they're trying too hard to deliberately pad the gameplay length.

Maybe I've been jaded by too many over-earnest high school-caliber performances, but I was genuinely pleased and surprised at the professional level of the voice acting — what little there is of it, anyway. It's saved for key scenes, usually at the beginning and end of each case, and as a whole is pretty good. It might not seem important that the waitress sounds authentically Noo Yawk Italian, but given the setting, it's a nice touch that adds to the atmosphere. By comparison, the animation is bland and stiff, consisting of the otherwise lovely hand-drawn characters sort of blinking vapidly while they wave their stiff limbs about. It's not terrible, but given the amount of polish in other departments, I almost wish they hadn't bothered and left the scenes stationary.

Where CSI: NY really shines, however, is the cases themselves, which are frequently outrageous in the fine tradition of prime-time television. The writing is always at the very least proficient, and the snappy dialogue comes across as naturally as the medical jargon does. While some of the cases are stranger than others, and none of the mysteries are ever very challenging, each has a varied and well-defined cast of characters unique to it that helps carry you along even in the more cut-and-dry scenarios.

Despite a few design and pacing flaws, CSI: NY remains a solidly enjoyable title for anyone with an interest in crime drama and quality. In fact, you could even say to miss it... would be criminal. *puts on sunglasses* YEEEEEEEAAAAAAA —

Virginia Dentata? Is that for REAL?

Is that the only bad pun in the game?

Unless they're slipping something past me, which is indeed possible, that was the only one I saw, which made it noteworthy. And bizarre!

I did find the "episodes" decent but overall even though I love the show on TV, I tried the 60 minute demo of this game and found it boring ... and I DO like hidden object games that are not so hard as to be more work than play.

Kyle Moore, trust me. If you hear the explanation, you will not say, "I'm glad I just heard that."

This game is an advert for Cisco isn't it? I like the way the gameplay fits with the show, but the blatant product placement grates I'm afraid.

I had to look up that character's name just to see if I was right in my suspicion, and I was. Horrible pun for a game that's supposed to be built on a TV crime series.

I would also prefer if they had actually made it so that you would get to finish the first chapter no matter how much time it took, to actually get a complete idea of how the whole game works. I had to install it onto my desktop computer, and run through it again, and only because I knew exactly what I had to do for most of it, I saved enough time to be able to finish the first chapter.

The game itself is not bad, the graphics look good too, although a bit too cartoony. But this is at best a mediocre game in my opinion.

i need the complete walkthrough for csi-ny: the game please, ty

The walkthrough for this game is on its way, but will take one or two days more.
When you tell me, where you are stucked, I will probably able to help you, move on.

i need the walk though for the 2 episode can you help me ,ty

@daranda - Episode 2
Can you tell me, where you have the problem, please?

Constructions Side of Fantastica Amusement Park

Once again Kayleigh has come through with a great (and extensive) walkthrough! Wooty tooty!

Oh, man.. at last a good detective games and its a pay-to-play. Crap. Why can't we, gamers, play good games without paying! I'm rebelling! *lol*

I know there is no walkthrough for game 5, but I am at the end, I am in the interview and I can't complete it. I'm missing something.... please help!!

Do you have any hints on Case 5? Perticually the shoe/tape challenge

case 5
Sorry, I don't know what you mean. And the game only has 4 cases. But maybe you can find help in the walkthrough on top of the comment?
Otherwise please give me a few more specific informations, where you are exactly and I will be glad to help you.

How can I get the walkthru for Case 2?

Freya-walkthrough case 2
Please have a look at the top of these comments. You will find there a walkthrough for all cases:)

There is a case 5...at least in the mac version. Got the shoe\tape puzzle but stuck on jz!!!

Case 5 is in the paid version only.
I also need help with the shoe tape puzzle.

I'm very sorry, David. But we reviewed the download version (which is of course also to pay). The retail version, you can buy in shops, has indeed a chapter more, but unfortunally I can't help you with this.

I hope, one of the users here is able to help you.

Amy Todd - Empire State Building
Please have a look at the walkthrough above the comments. You will find there help in word and picture.

But when you have any further questions, please feel free to come back and I will be glad to help you.

I'm on case five and I can't get the stain on the shoe covered. I also can't skip it so I'm stuck. Hope someone can help