Cross stitching is usually thought of as a craft dedicated to fair maidens locked away in forbidding towers, or else Internet-lurking DIY aficionados who use it to embroider Star Wars quotes. But it takes courage to attempt (and succeed wonderfully) to turn it into a game, and that makes Cross Stitch Casper an entirely singular point-and-click experience. 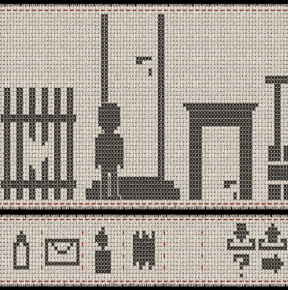 When we first meet Casper, he's just waking up and wants to check on his dad. As he gets up and goes out of his room and through the kitchen, you get the idea that he doesn't lead a perfectly comfortable life, but it's not until he reaches his father's room that you understand why. His father is a drunk and a gambler and has managed to get in debt with a certain Mr. Raynold, who threatens to take the family ranch as payment. All the responsibility falls on Casper's little shoulders, as he has to find a way to keep his home.

It's a short game in a small world, so getting around isn't difficult. Use the mouse to play – right click to examine, left click to pick items up and use them. The cross stitched nature of the graphics doesn't allow for many details, so some objects might be difficult to recognise, but it's easy to identify them by examining. There is a limited number of uncluttered rooms which simplifies the search for usable items and makes the gameplay natural and intuitive. 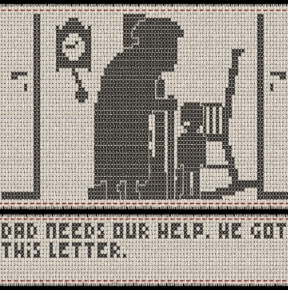 Granted, you don't come across embroidered games every day, and it is quite a hit-and-miss choice. It could have easily backfired and seemed like a gimmicky (though ingenious) way to create a novelty game. Instead, the cross stitching actually provides a beautiful frame for the story. It adds a quaint, homey feeling to the Western setting (complete with a saloon and some tumbleweed) and gives the strange impression of a true family drama taking place on a piece of fabric.

When talking about a game which takes about half an hour to finish, it's hard to say anything about the plot without spoiling it. Let's just say that, in such a short time, Cross Stitch Casper tells a complete story of misspent lives, of hope, despair and powerlessness. When you play it (and you really should), take your time. It deals with terribly difficult issues, but it moves quite quickly, so you might lose something if you don't stop at every scene and dialogue and let it sink in. There will also be one item, easily missed and immaterial to the plot, but if you use it, it will reward you with a touching scene.

Cross Stitch Casper is one of those rare and delicate games which manage to fit a formidable amount of emotions and meaning into a small package. With its unique visual style and masterful storytelling, this is one little gem you shouldn't miss.

This was a sweet little game ... until the end.

I think the tragedy of losing Nana was really unnecessary to the story. The whole end scene with the fire felt out of place, both plotwise and graphically.

It could have been an ending where this child is saved, not damned.

I did like that the attorney is named Mr. Steamstein. And up until the ending the game was pretty much perfect.

Sorry for the double post but I just noticed upon trying to click this game's tag "point-and-click" that the rest of this site uses the spelling "pointandclick." Maybe the tag should be edited so the game is not omitted from searches. :)

Goodness :O. Thanks for noticing, it's fixed :).

Nana is not a good problem solver. O_O

What the hell did I just play??? I agree with what Ottoman said above. That end was just wrong for so many reasons. One nice touch though was...

if you pick a flower from Nana's garden and put it on the mother's grave and give the boy a minute alone. I thought that was sweet. The game even thanks you for it in the credits.

I like the idea of cross stitch graphics but this game could have benefited from using colour. The blocky monotone look made it hard to tell what some things were and didn't draw me into the game at all.

That ending was horrifying.

It could have been a lovely, heartwarming moment, and instead... yikes.

It's hard to differentiate between the different objects, since the game is all one color. Overall though, interesting game mechanics.

I didn't like the ending, either. I was invested in the previous tone of the story, and I feel like a lot of very stupid things had to happen for it to end that way.

A bunch of criminals whose plans have just been foiled are after your drunken son-in-law. You don't really care about him much, but your young and impressionable grandson, who you do care about, is next door unattended. It's very likely that something violent is about to happen. You may or may not be aware that your grandson has developed a troubling fascination with fire, but you definitely don't want him getting hurt if he runs out and bothers the criminals.

Clearly, the best solution is to go to sleep right now instead of fetching him, telling him that the ranch is safe and he needs to stay put, and going to sleep after (or, if you're really incapable of getting over there, opening the back door and calling for him to come over to you.)

I can understand that a thoughtless or apathetic adult might just go to sleep in the middle of the crisis, but Nana was previously characterized as neither of those things.

Also, the visual effect in the end really didn't look good with the rest of the game.

But I enjoyed it a lot up until then, the characters were very sympathetic.