Given how many of us have hectic, high-pressure jobs in real life, it's an amazing paradox that we love simulating the experience in our time off through time management games. Yet we keeping dashing through dairy farms, hotels, even parking lots. However, none of that can compare to being in sole control of a restaurant and making it run like clockwork. In Cooking Dash 3: Thrills and Spills, you, as Flo, sweep through a series of food venues in an amusement park like a cuter and more clean-mouthed Gordon Ramsay, turning run-down establishments into money makers. It's a refreshing prequel that furthers tightens an already impressive series. 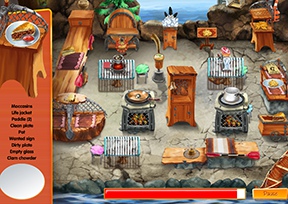 The heart of the gameplay involves seating, serving, and cashing out a plethora of customers, from the patient old man to the high maintenance celebrity. Once a customer thought-bubbles an order, you click on various stations to assemble it, serve it, give them some time to eat it, and then take their money and clear their dishes. You'll have to keep a close eye on the happiness meter of hearts floating over their heads to make sure that you prioritize. You can increase your efficiency by chaining actions together and by using your profits to buy upgrades between levels. You'll also have opportunities between levels to earn prepared dishes through a variety of mini-games, such as hidden object scenes, speed collecting, and catching falling food items on a tray. If you're here for the dashing and nothing but the dashing, all the mini-games are skippable.

Don't be afraid to spend your money on all the upgrades you can, because when you finish an area and move to the next, you'll start completely over with no money and no upgrades. However, each area has its own kinds of cuisine, from fried fish at a pirate restaurant to spooky "eye balls" made from two big meatballs and two strategically placed olive slices at a haunted house restaurant. The different ways of making the food, and a steady introduction of new kinds of customers and upgrades, keeps it from being repetitive. 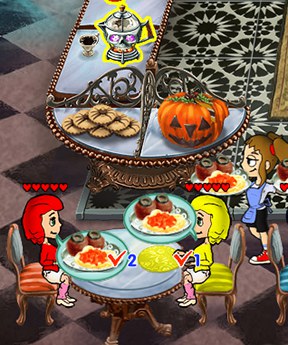 Analysis: Even in "casual" mode, the difficulty level is high. Like most dash games, making a serious mistake can have cascading effects, leaving you scrambling as one customer after another leaves in a huff. When the mistake was due to your own poor planning, that's one thing. However, particularly on some levels with small clicking areas for different objects directly adjacent to each other, in the flurry of clicking it can be maddeningly easy to click the wrong thing, and there's no way to undo anything.

While the game's AI generally does a pretty good job at determining what you're trying to do in your chains based on what the people have ordered, the rare screw-ups are extremely irritating when they happen. For example, I had Flo carrying a burger on one plate and a ham sandwich on the other, and I wanted tomato on the burger and lettuce on the ham, so I set up a chain to do this. The game, however, put the tomato on the ham, because there was also a character who had ordered a ham and tomato sandwich. Because I had already chained the lettuce, I could only watch in horror as Flo cheerfully added lettuce to the burger. Not only had no one ordered a burger with lettuce, but the customer who ordered the burger with tomato was down to one heart and before I could get another burger on the grill, he stormed out of the restaurant taking my only chance of finishing the level at "expert" with him. "Command-Q" never felt so good, readers.

That said, it all goes back to what I mentioned in my first paragraph about the paradoxical charm of these time management games. They are maddening, stress-raising, ragequit-inducing, time-sucking vortices, and yet somehow that's what makes them so addictive. It really wasn't very long before, almost against my will, my cursor was creeping to the applications menu to give the game another go. I guess it's the adrenaline rush and the exhilaration when you finally do wrestle a level into submission. The game is an excellent length too, easily six hours even in the regular edition. Nitpicks aside, the only thing I'd like to see them change in the next game is maybe the star. I would totally pay for a Collector's Edition of Cooking Dash 4: Gordon Ramsay Edition.

A Collector's Edition is also available. It contains an in-game strategy guide, wallpaper, screen savers, and an extra area that will lengthen the game by another hour or two depending on your play speed. Remember that Big Fish Game Club Members pay only $13.99 for Collector's Editions (or 2 club credits), and collector's editions count 3 card punches of 6 total needed for a free game.

Yeah, but if you've got a really long chain going, right-clicking and then re-clicking everything can be a pain in the rear, especially when pressed for time. Also, if you have a burger and a ham sandwich, for example, the game will ultimately decide which sandwich gets the lettuce and which doesn't - you can't foresee it and cut the chain in time before this happens.

Love the game, though. Expert mode is fracking hard!!