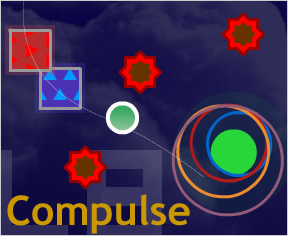 It's just not a proper week without a new jmtb02 game. But if you're expecting the usual jolt of hyperactive skull-smashery from John Cooney—like TBA or Grid16—you'd better slow down, Miss Sally Brown. Compulse is John's attempt at a tightly packed zen experience, and it's 98% adrenaline-free, with extra soothing strategy flavor.

Compulse is basically just an indirect game of golf. Your object on each of 25 levels is to get the ball in the goal, by dragging and dropping squares of force that push the ball up, down, left, or right. You'll have to work with and against the constant pull of gravity, and new obstacles will come along regularly to make life interesting. The goal is a mysterious vortex of spinning rings, and on most levels, you'll have to collect some missing rings to complete the vortex before you can exit.

That's simple enough, but where Compulse departs from most games of its ilk is in its open-ended gameplay. You can place as many squares on the screen as you like, forcing the ball through extensive convulsions on its way to freedom. Either that, or you can shoot for efficiency, and try to complete the level with as few squares as possible. Each level has two different benchmarks, and you'll get a little gold star on the menu screen each time you make a Pro Score.

Analysis: I appreciate the change of pace, but Compulse is perhaps a little too lenient in some ways. Many of the Pro Scores are too high (Note: John has updated these scores since this review was published.), and there are usually many different solutions to a given level. You have so much freedom to experiment, it sometimes feels like more of a toy than a game. There's even an insanely complete replay function, so you can relive your clever solutions backwards and forwards.

But that's cool. It is what it is. There are clouds in the background. The music (by "MaestroRage", paradoxically) is a breezy mixture of strings, chimes, and rain. The presentation could hardly be better. If you're not in any hurry, this is a lovely way to spend 20 minutes or so.

But jmtb02—perhaps sensing that some players might need a dangling carrot above and beyond the pure love of watching gravity work—has typed out a short, witty narrative for each level. These are so entertaining that I eventually found myself playing just to see what John had to say next; they are so revealing about his thought process that, in the end, I felt slightly closer to him as a human being. As odd as that may sound.

I don't know if a game has to include a director's commentary in order to make that kind of contact, and I'd rather it not become a trend, but in this case the personal touch works. This is a tasteful and intelligent diversion from one of the most prolific Flash designers on the scene.

You can also play this game at John's jmtb02 Studios site.

Great game as all of the jmtb02.

Wow, great April Fool's Day joke! You really had me going th- Wait, what? No odd link or non-sequiter? Oi'm bloomin' outraged, oi am! Oh well, at least odd games with tricky aiming in them are good attention-grabbers.

Yeah, easy to get 200%. Still great fun though! And yes, I'm waiting for some sort of april fools to come...and also, why do people make a big deal about posting first..

Can anyone get a better Pro-score than me on Level-20?

Thanks Psychotronic for another great review.

I found out quite early yesterday that everyone and their mother are better than I am at my own games. Those Pro Scores are all the scores that I could achieve after playing the game five times through... meaning that I am just terrible at this game. :).

I just beat my own pro-score for Level-20.

It's easy to get good scores because the game is implemented so considerately. There's that nice guideline that follows the ball, so if you're patient, you can just keep making fine adjustments and adding squares one at a time to that line, in order to make the most efficient path.

Ironically, if the game were less user-friendly, it would be more challenging.

Oddly enough, I beat the pro score on every level without trying that hard. Maybe it's just me.

I doubt anyone could beat this :).

Very good game, it held me until the end.
I agree the pro scores weren't really challenging. I also did 4 on lvl 21 and got 9 on lvl25 without trying too hard...
I thought you could see replay of your levels when clicking on the stars at the end of the game, but actually you can't. I'd enjoye that feature :-)

It's fun to do level 25 by going for the teleporter first.

I don't know if anyone else noticed, but jmtb02 has updated the game (v1.1) and fixed the Pro Scores on many of the levels making them more of a challenge. I had to go back and redo about 6 levels after the update to beat the updated pro score. The only one I am stuck on now is level 24.

Took a while to go back and clean up the last couple levels that had their standards tightened. I really liked the atmosphere of the game and the total lack of aggravation it caused me by limiting my moves or with lives.

The pro score requirements have been changed as of a few hours ago.
I played it again and I shot a 56.
100 under par and 4 under pro

Decent, but gets old quite fast - not like ze olde TIM.
Also lacks the classic abuse protection for point and click flash:

Grab an object (drag) then TAB over to the Go button and ENTER - the current piece stays in your hand/cursor and u can still move it. Via that cheat u can basically go through any level with just one piece. (yes i know that would be pointless)

Has anyone else just made a sandbox/playground for the ball with tons of squares and watched what happened? Now that's zen...

I admit that I had to play around with this at least thirty minutes to get it right, but I have managed to solve level 24 with just two blocks. ;)
Show solution
So I'm now 8 under pro (and I won't try to get any better than this...). :)

Got a 51 on this game, looks like more improvement can be done on this score.

I was able to beat level 14 with only 2 bricks! I got lucky! (the link to the image is below in the spoiler)

I'm pretty proud of this; level 20 only using 5 blocks. I know it's not perfect on the picture, but if you lower the leftmost blue block a little to the left and down, you're in business. Enjoy!

I'm trying so hard to get 22 in two tiles. Can someone post a picture of how to do it?

i did the final level with 99 blocks lol... the ball travel for every parts of the screen and ends in a infinite loop...

if u doubt check my video on youtube: http://hk.youtube.com/watch?v=ckL_oIFqOzw