Cody's just a kid like any other, right up until burglars break into his house and make off with his beloved comic collection. When he tracks them down, however, he discovers something amazing... collecting the comics left behind allows him to transform into the heroes within the pages, unlocking their special abilities to deliver sweet, nerdy vengeance on those Beagle Boys wannabes! Eric Bernier's platforming action game Comic Book Cody brings a great style and premise to tap into every kid's fantasy. Use [WASD] or the [arrow] keys to move and jump, grabbing all the comics on each level to turn into a superhero. Be careful, since mild-mannered kid Cody can be taken out in a single hit, so avoid any enemies until you transform. Levels wrap, meaning you can drop from the bottom and fall down from the top, so don't worry about falling. Each stage needs to be cleared of enemies before you can proceed, and each hero has a different ability to help you do so, from freeze rays to super speed. 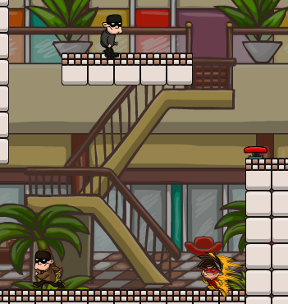 Comic Book Cody has such a great concept that it's a shame it wasn't played with a bit more. The levels all wind up feeling very similar, and it seems like they would have provided a great opportunity for Cody to use his powers in different ways than smacking the same baddies over and over. It's the sort of thing older gamers might find a bit repetitive, which is unfortunate since the game not only looks great, but its responsive gameplay, relatively low difficulty, and boss battles will make it an easy hit with the kiddie crowd. A sequel to flesh out its concepts seems like an easy choice, but for now, Comic Book Cody is still a great idea with a lot of personality that makes it a great way to start younger gamers off with platforming. Just don't blame me if you catch them eating their comic books and expecting to gain super-powers later.

Fun concept, but the game lags a little for me. It has actually got me killed before.

The game is pretty much the same level over and over, without a lot of new components to keep it interesting. Fun for the first few levels, but then just tedious. That said, I finished it.

Good game, but the medal system is brutal. I've yet to get a gold.

I'm also stuck on lv 20. Can't reach the top comic with a jump or using the red trampoline.... Any hints?

3,365 Views
6 Comments
chrpa— Jayisgames needs your help to continue providing quality content. Click for details After a tiring long day - it's not fun to raise five kids - Mother Mouse finally put her offsprings to bed and left the room for...  ...