Erica Reed, FBI agent, certainly seems to attract a certain type. Unfortunately that type seems to be serial killers with a flair for the thematic and dramatic. Hours after the previous cliffhanger, and still recovering from her perhaps-not-as-unconnected-as-they-first-seemed investigations into the The Hangman and The Wise Monkey, Erica gets her curiosity piqued by the trail of clues (and bodies) leading to the Enthon Towers, a luxurious high-rise with a checkered past. But when a shady new superior forbids her from investigation... well, that gets her attention. Cognition: An Erica Reed Thriller: Episode 3: The Oracle is the third in the series of episodic point-and-click mystery adventure games by Phoenix Online Studios, and it's really going to bake your noodle. 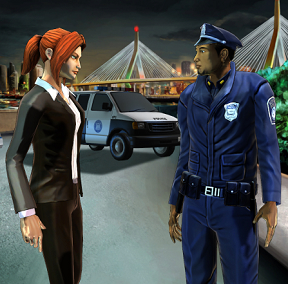 Click to have Erica walk to a location, and if the cursor lights up, click again to examine, manipulate, or talk with your selected target. In the top left corner of the screen is your inventory which allows basic item usage along with combining objects. You also have a phone that allows you to contact other agents, search for information, or call your father for a hint. With the action centered on Enthon Towers, there's no use for a map screen this time around. Clicking the cognition icon allows Erica to use her cognition powers, visually marking objects that she perceives as unique and allowing a glimpse into the past and a possible reconstruction of events that transpired. You will soon gain the new psychic ability to make contact with another character who will, uh, "assist" in your investigation. At times, the player will control this character and utilize their own set of unique powers to help Erica sift through what the heck happened.

Analysis: If the first two episodes of Cognition were a little meandering in their set-up, then this is the pay-off, and it is glorious. Phoenix Online Studios clearly took the time to map out Erica Reed's story in all of its intricacies ahead of time, and this is the point where plot threads are beginning to weave together, and overlooked bits of foreshadowing could not have been more obvious in retrospect. Keeping things in a single location this time around means the game is fairly short and largely linear, but that is balanced by how it keeps the story focused and tense (and, not incidentally, side-steps the "you need a pencil to solve this puzzle, but the only pencil in this game-universe is halfway across town" problem that affected earlier episodes). The puzzles feel much more investigative and psychological than inventory as Erica and her new partner use their cognitive abilities to unravel the complex backstory, and yes, the phrase "multiple timelines" will probably be invoked in the mind of the player. The lack of forensics to balance it out mean that some parts may be get a little too sci-fi for those wanting a more down-to-earth thriller, but the basic premise remains the same: people have been killed, and its up to you to find out whodunit and the horrific details of whydunit. Of special note, also, is Austin Haynes amazing soundtrack (which, in a smart move, is available for purchase at the Phoenix Online Store). 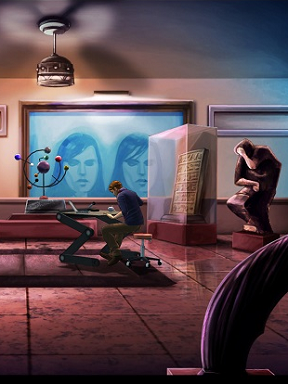 On the downside, while the 3D models and animations are improved, they're still served with a noticeable side of uncanny valley dressing, and far out-classed by the 2D environments. Likewise, while Raleigh Holmes serves a tough-but-sympathetic Boston twang as Erica's voice actor, excellent as always, but some of the minor characters veer between hammy and under-emotional. Also, while the puzzles are mostly logical and intuitive (with the endgame sequence being a particularly exciting stand-out), there are a couple that may have players pulling their hair out, if they've not read every scrap of information they can find. Most of the time Cognition lives up to its story consultant Jane Jensen's work on Gabriel Knight, but figuring out how to crack open the safe here reminds one more of, well, Gabriel Knight 3.

Cognition: An Erica Reed Thriller's continuity is tight, and as the third episode of a four-part series, the game is entirely playable for those new to the series, but it will feel like wandering into the middle of the movie. With the final, climactic chapter soon to be released, however, there has been no better time to catch up. Adventure game fans who worried if Cognition was going to be able to stick the landing should rest assured: even those without psychic powers will say that this series is only getting better.

Thank you Tricky! Glad to see you enjoyed the episode :)