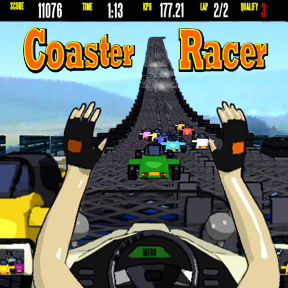 Your car begins to climb up the rickety wooden track, clicking ominously as you rise higher and higher above the ground. Fearlessly you raise your hands up in anticipation of the long, precarious drop that awaits you. Then the clacking slows and stops. You hover for a second, barely moving over the edge... and then... you quickly bring your hands back to the steering wheel as you hit the nitro button, zipping down the track at 170kph, barely missing the other cars as you zip past them, veering into the turn while trying to avoid hitting the sides. Uh oh, there's a gap coming up! Will you hit the jump in time? Whooooaaaaahhhhhhh...

Feeling pumped yet? These two slightly different experiences best describe LongAnimals newest game, Coaster Racer. In this first-person racing game, you compete against 16 other off-road race cars across eight elevated, rollercoaster-like tracks. Classic gaming fans may notice that Coaster Racer has a look and feel similar to the old Amiga title Stunt Car Racer. Like that title, you control your car with the arrow keys, accelerating, turning and braking to avoid hitting the sides or falling off the edge of the elevated track. To add some variety, there's also a rechargeable nitro feature, giving your racer more zip to pass your opponents, and a "freestyle" button that lets you dangerously raise your hands to earn more points. The goal is to complete each track as close to first as possible, or at least qualify to unlock the next track, something that may require several replays on the later levels. Along the way, you can pick up cash on the course and finish races to earn money for upgrades and repairs to your racer.

Coaster Racer is quite a fun casual arcade racing game, and its smooth controls and fluid-looking visuals are excellent examples of Flash technology being pushed to its limits. You really get a sense of speed as you traverse the courses, and the game's nifty blur effects when using nitro helps augment that sense even further. Some of the tracks are really tricky (if you fall off or hit the sides it's almost impossible to catch up to qualify), but practicing the courses helps you anticipate when you need to brake or let go of the acceleration key to get through stretches unscathed. While the damage to your car during play seems a bit arbitrary, and the variety of tracks seems a little thin, overall Coaster Racer is an entertaining break game. If you feel the need for speed, see if you can coast your way to victory in this nifty racer.

The Stunt Car Racer reference is puzzling as this is very obviously based on Sega's Power Drift from 1988.

Stunt Car Racer was a year later, it was a fine game but this game bears almost no resemblance.

Yeah, there are similarities between it and Power Drift, but Stunt Track Racer, like this one, was a 1st-person view, elevated track, similar nitro, etc. That was crude vector, though, similar to Hard Drivin', while Power Drift was indeed all sprites.

Fantastic racing game, great graphics, played it for about 2 hours. Combines upgrade dollars with racing. It does remind me of an arcade game Nitro Thunder and Hard driving. I am wondering however, I cleared all the races but what happens after you get all achievements. Is their an ending? Secret track 9?