Ah, the holidays. It's just not Christmas if there isn't a jealous, grunting old man creeping outside your window, brandishing a disturbing knobby... branch... while you and your beloved share a tender moment. That beloved holiday tradition is the start of Elephant Games's entry into the Christmas Stories hidden-object adventure series, Christmas Stories: Hans Christian Andersen's Tin Soldier. Charles and Nina have been turned into toys thanks to a curse and malfunctioning magic from their jealous voyeur, the Baron, and your friend Albert, who's also been transformed, has called you in to help. You'd think a fully grown human would be able to handle a bunch of toys, but the Baron has the surly box trolls on his side, and you have... uh... well, in his current form, Albert can crack you all the nuts you want, so bonus for snackies, I guess. Together with Albert, and Charles once you find him, you'll need to stop the Baron, who has an entire army of trolls on his side, and find Nina. To do so, you'll need to solve puzzles, enlist the aid of Albert and Charles to get past certain obstacles, hunt through hidden-object sequences, and of course, deal with the magical forces and other sneaky tricks of the Baron, who always seems to be one step ahead of you, despite not actually having feet anymore. With vibrant visuals, genuinely funny animation, and some unexpected heart, this Christmas casual should be on anyone's short list if you're looking for holiday cheer. 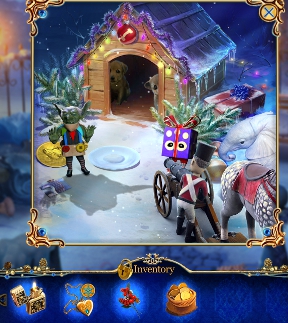 Apart from the almost painfully whimsical premise and cute characters, Tin Soldier has some surprisingly thoughtful themes running throughout that make it a compelling twist on the classic tale. Before they were turned to toys, Charles and Nina were people who grew up together and fell in love, though they've been apart for a long time after Charles was drafted into the war. He's home now, but during the war he lost a leg, and he's afraid that Nina will see him and the crutches he'll need for the rest of his life as a burden even though she still loves him dearly. The tin soldier Charles is transformed into is actually made from a mold sent to Nina by a friend, who says they should use it to melt down the bullets left over from his time as a soldier, since he won't need them anymore. Heck, it's even implied that Charles suffers from PTSD. These sorts of things could come across as heavy-handed and out of place in a game where you fight off fat green gremlins wielding candy canes and wearing presents, but they're implemented remarkably well and with subtle care. Combined with the fantastic and funny animation that enlivens the rest of the game as you explore and interact with people and things, it makes for a game that feels like it strikes just the right balance of humour, drama, fantasy, and character development... the latter of which isn't exactly something that's common in casual games.

It actually serves to make the fact that Nina spends all her time sobbing and calling for help to be rescued a little more grating, since it feels like the game missed its chance to provide her with the same sort of depth Charles has. Nina's defining and seemingly only character trait is that she's loyal to Charles and didn't cheat on him while he was gone even though she could have... lady, that makes you a decent human being, not a compelling female lead. Sure, it's "just" a casual game, but if it's going to try (and surprisingly succeed) to incorporate more serious and emotional elements, it's not unreasonable to point out that there were other aspects of its story and character that could have used similar development.

While the gameplay is pretty familiar and there's a substantial amount of backtracking, the sheer amount of cutscenes and surprises helps keep it from ever feeling stale. Every location has optional collections to find and things to click on, and the hidden-object scenes have enough variety and quirks to enliven them. Difficult? Not especially, with most of its puzzles being extremely straight-forward. But Christmas Stories:
Hans Christian Andersen's Tin Soldier is still an incredibly engrossing game, with a sense of flair and all the magic and charm of a Christmas special. The creativity in its design is remarkable, so every area has tons of detail and things to do, and, yeah, okay, it really is disgustingly adorable too. Guys, it has a Monty Python reference. The bottom line is, this game feels like a genuine work of love and Christmas cheer, enough to soften up any curmudgeon, and is absolutely the perfect choice if you're looking for a holiday game that will keep you hooked start to finish. From start to finish it's a colourful, charming, seasonal delight with high production values and tons to do, making this an easy recommendation for virtually any casual gaming fan who hasn't gone full Grinch.

They get 5 mushrooms just for spelling his name correctly. :D