Child of a Witch Trilogy 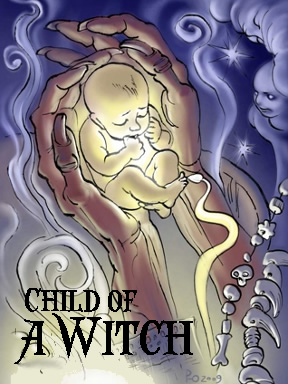 You've gotta love your mother, even if she's a gnarly and cranky old witch who doesn't like your taste in girlfriends. She just may have her reasons for being crotchety, controlling and downright witchy. In the Child of a Witch Trilogy by Garbuz Games, three chapters of a spot-the-difference game, a somewhat touching story unfolds that may explain why gnarly old witches are, well, gnarly old witches.

Scour each screen to spot the six differences in every level and click as you find them. Choose to play with hints or without, and find the differences within the allotted time frame. And if you're expecting to play with ease, it seems that Garbuz has ramped up the difficulty a notch or two, as many of the differences are very well hidden.

Like the Butterfly Fantasy trilogy that was featured over several Link Dump Fridays, Garbuz has again skillfully created a story through pictures. However, in the last chapter of Child of a Witch, some text is incorporated which perhaps serves to provide further insight into the entire story, although it can be more distracting than useful. For those who aim for high scores it might be more annoying than helpful, but Garbuz's wonderful abilities to weave a beautiful tale override any apparent shortcomings. And on that note of powerful story-telling, there is an adult theme of implied rape in the second chapter of the game, hence the orange rating.

Garbuz has again created a beautiful story that draws you in and gets you playing even if it's just to find out how the story ends. This time the story jumps backwards in time and reminds us not to judge simply on appearances, even when someone looks like an evil and nasty old witch. Witches are mothers too, and will do whatever they can to protect their offspring, even if it means deceitfully conjuring corpses. But after playing the Child of a Witch Trilogy, you can't help but feel that witches have their hearts in the right places. So next time your mom looks gnarly and cranky, give her a hug and tell her that you love her.

Play Child of a Witch 1

Play Child of a Witch 2

Play Child of a Witch 3

Absolutely beautiful. I loved it.

I notice the characters' outfits change around a bit randomly - it's kind of annoying having some continuity errors in a game based on detail, but I love the effortless drawing style of the pictures and the story was good
the music was nice too, I think I would have preferred the last one without the captions but I may not have understood the story without them lol

:) That was more fun than I thought it would be. I don't think it's a continuity thing exactly, because I noticed that it is the little circle that denotes which change will occur- I used this to get rid of those headbands whenever I could. Don't know why, just hate them! But after playing all three in a row, I did find myself idly wondering if the little folk wondered what happened to their cuffs, hems, shoes, and headbands. (Yes, yes, I know they aren't real, but in an infinite universe and all that...)

My only "complaint" is that I didn't like the text showing up in the 3rd installment. To me it cheapened the pictures to have text explaining them. And was pretty much unnecessary. But I totally enjoyed myself, so that's not too major.

For some reason, whenever I try to 'play' the third game (after loading) I just get a black screen. I've tried following different links to get to the game, and I emptied my cache and tried again, but no luck. Help?

I kind of don't get the storyline...

Neither do I Xinya...Could anyone explain it to us please?

Lemme break it down for yall:
Part 1

Maid be cryin in bed from bein raped

Maid prego, wife talk to old guy about what to do

Baby taken away from maid

Maid tries to get baby back, but old guy stop her

Realize Part 2 is prequel to Part 1

Old man invite girl into mansion, show her around

Girl do chores for old man

Back at cabin, boy be sad from girl death, make witch mom be sad

Witch mom give letter to boy to give old man, tell him he be stolen son

915 Views
0 Comments
chrpa— Jayisgames needs your help to continue providing quality content. Click for details Welcome to the Roundup 50 with three games! As mentioned in the previous roundups, only odd-numbered episodes are featured since even-numbered are for Robin Vencel's patrons. More...  ...

2,499 Views
7 Comments
chrpa— Jayisgames needs your help to continue providing quality content. Click for details Hi! Weekday Escape and Weekday Puzzle are here! The first escape is another remake of an episode from the series Booca in the Southern Islands by Coconuts...  ...

1,317 Views
0 Comments
jayisgames.com— Are you wondering how to win Mahjong? With proper strategy, practice, and patience, you can become a master of this game. With that, you must also avoid rushing into making random moves, as it can jeopardize your position in the...  ...

3,158 Views
2 Comments
chrpa— Jayisgames needs your help to continue providing quality content. Click for details It's nighttime and you find yourself in the garden of a small Rinnogogo's hotel. The garden gate is locked and the garden seems deserted but after a while...  ...