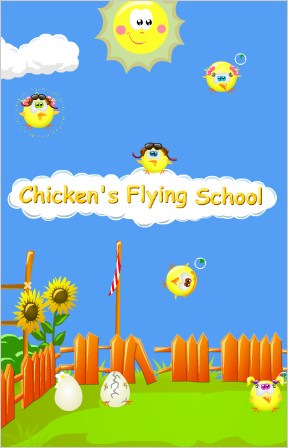 If you would describe yourself as both nurturing and sadistic, today's game is perfect for you. Chicken's Flying School, from Xenao Games, is about preparing newborn chicks for a big flying tournament 20 days from now. Since time is short, and you'll apparently be needing a massive troop of trained performing chicken infants, it's sink-or-swim time for the little puffballs. Or, to be more specific, it's get-tossed-into-the-air and-don't-fall time. I have never been more serious in my life than when I say this: Don't try this at home. Do not teach baby chickens to fly by throwing them. You will make everybody sad.

But in a video game, it's totally fine. Adorable, even! On each level, you need to launch a certain number of chicks into the sky and keep them there with puffs of air until they learn to spread their wings and fly on their own. The resident hen will supply you with a steady flow of eggs. Once a chick breaks free of its shell, you can send it upwards with a click of the mouse button. Then keep it from falling to the ground by clicking underneath it with something I've never heard of called an "air sponge". This is easy enough with one chick, but handling multiple flight pupils simultaneously will take a lot of quick thinking and crowd control technique.

After a certain length of time in the air, the little cuties will figure out how to stay aloft by themselves, flutter over to the nearby fence, and perch there in a manner reminiscent of Hitchcock's The Birds. I'm guessing the chicks are planning to thank you for your tough-love style of tutoring by using their newfound powers of flight to go for your eyes.

As you pass levels and the weather gets worse, your job gets more complicated. Gusts of wind threaten to blow the chicks off-screen. Rainstorms make them water-logged, so they fall faster. Predators arrive to terrorize them, and must be booted away with a click of the mouse.

To help balance the odds, power-up clouds float by once in a while. If you burst them in time, they grant you temporary bonuses, like helium balloons for all the little tykes, or a larger, more powerful "air sponge". Activate your bonuses by either clicking on them or pressing the appropriate number hotkey.

Analysis: Chicken's Flying School reminds me of the now classic Popcap title Insaniquarium, which was not so much about time management as it was about attention management. By the last level of this game, you'll be keeping at least four chicks in the air at any given time whilst popping rain clouds to stave off the weather, watching for approaching pests in three different corners of the screen, trying to center everybody in the middle to guard against strong gusts of wind, and planning out a strategy for your dwindling stockpile of power-ups. It's a lot to think about, and if you don't loosen up first, the constant, tense clicking will hurt your wrist. Seriously, don't hurt yourself playing this. The chickens aren't worth it. 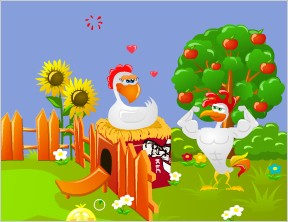 But the consistently high level of involvement makes the game fun, and the atmosphere is sugary-sweet enough to make your arms tingle. The artwork is almost supernaturally bright and colorful, while kids of all ages will appreciate the detailed character animation. That fox is so sneaky. Those chicks are so helpless. That rooster who comes to distract the hen is so muscular. The music will drive you insane no matter who you are, but some of us like to flirt with insanity occasionally, thank you very much.

My one big argument with Chicken's Flying School concerns the overall pacing. Xenao Games are trying to stretch about five good gameplay ideas across 20 levels. In order to cover the distance, they roll out new complications at a constant rate, and gradually increase the number of chicks who need to graduate from flying school each level. But instead of just making the later levels harder, they also make them dramatically longer, which eventually turns this from a test of skill into a grinding slog. Don't feel like you have to complete the whole game in one sitting.

This is the sort of game where you're clicking along, going pleasantly mad, having a good time, until you realize that level 18 is twenty times longer than level 1 was, and what you thought was going to be a cute little diversion is now going to make you late for your shift at KFC. Well, at least you'll soon get your revenge.

... I have no chicks. I have a lovely sunny farm day, bouncy music, a moving sun... but no flight school cadets. Oh dear. :(

"Don't try this at home. Do not teach baby chickens to fly by throwing them. You will make everybody sad."
Don't be such a spoilsport. While it doesn't have a very high success rate, the chickens that do learn to fly do so quite quickly. (This is purely hypothetical, they've all fallen when I've tried)

I found a bug. At the next level's info screen, if you hit the pause button (lower left corner), then hit resume, it will think you beat the level for some reason.

I like it a lot! it's so cute! some of the power-ups and the storyline are rather illogical though example

wouldn't the cock talking to the hen fertilize more eggs and lead to more chicks, and why wouldn't the bomb thing scare away the hen. maybe i'm just overthinking things...lol

The last level is rather hard... and maybe it's just my learning curve but it took me a long time to beat level 9 and afterwards everything was just a breeze...hmmm...weird.

and oh, sorry for double posting, but I think the game can be improved if, after the chicken has learned to fly, that it'd fly upwards (or disappear or change color) instead of flying horizontally towards the left. sometimes I have "chicken still in training" right on the leftmost area when other chicks just finished training, and what happens is that I get confused as to which ones are done and which ones are the ones I need to keep afloat. if that makes any sense at all. So what happens is I lose some of the chicks in training because the screen is too crowded...