Business a flop? Just start up another! That's what happens when our heroine finds her little bookstore failing in The Revills Games' casual card game Chef Solitaire USA. She realizes her talent for cooking might help her turn a pretty penny, and now she's off across all the country. But instead of flipping flapjacks, you'll be flipping cards, as you strive for a perfect score across dozens and dozens of levels. 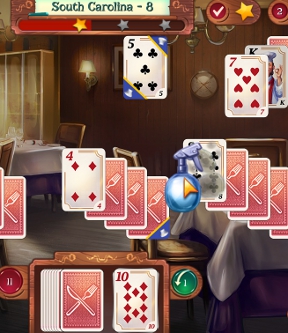 If you've never played solitaire, there's no need to be intimidated. The game will give you a tutorial, but the basics are to click on cards that are one higher or lower than the card you've currently been dealt, and try to keep up long chains to remove as many cards from the field as possible until you need to draw another. In Chef Solitaire USA, you win when you've collected all the cards with chef hats in a level, and of course getting a high score by clearing the field doesn't hurt either. Some cards may be locked by kitchen mishaps... if some hot bacon falls on a card, for instance, you can move it, or any cards under it, until you've found the tongs to lift the bacon away. If you accidentally draw another card when there was still a move you could have made, you get one chance per level to undo your last action. Additionally, the cash you earn, both from your score and occasionally playing minigames like Burger Run that you might pull instead of a card, can be used to purchase upgrades in the shop between levels. You'll need a certain amount of stars, granted upon stage completion based on how well you did, to open new restaurants in other states, so get cracking. And stirring. And broiling. You call that mise en place?! Someone get me Gordon Ramsay! 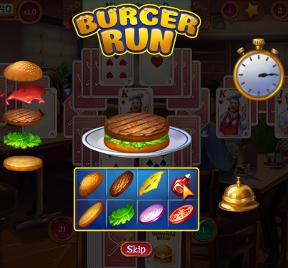 Chef Solitaire USA is the sort of perfectly pleasant casual card game you love to have on hand. It's relaxing, well put together, and packed to the gills with levels upon levels upon burgers upon levels, making it perfect for solitaire fanatics. The minigames and card locks don't pop up enough to get annoying, and the presentation is top notch. There is a story, mostly revealed in diary entries and the odd cutscene, but if you can't be bothered with characters and just want something to kick back and shuffle the night away with, Chef Solitaire USA is still a good bet. The downside is that due to its level goal of getting all the chef hats to succeed, rather than having you aim for a specific score total, it's a lot easier to fail a stage even if you play all the cards you're dealt properly just do to the random order of them... especially when dealing with special obstacles that require you to unearth a tool to move them. It makes it a little more challenging, sure, but also a lot more frustrating when you're sitting and flipping through a half dozen or more cards right off the bat, unable to do anything. This is hardly unique to Chef Solitaire USA, it just happened far more often here than in other similar solitaire games, and I'm not sure whether it's simple bad luck or lack of skill, or something else. Despite this, Chef Solitaire USA is still addictive, and it's a fine entry into a particular vein of solitaire popularized by titles like Regency Solitaire and more. It's a fun, mostly straightforward variation on the genre that's easily recommended to anyone looking for anything to while away the night with. Just don't burn your fingers.

Mac OS X:
This game is available via GameHouse membership.