Grey Alien Games' Regency Solitaire is as lovely and elegant as you'd expect an indie card game to be, which is quite lovely and elegant indeed. The game follows Bella, desperate to escape an arranged marriage to her less than desirable neighbour after her layabout brother gambles the family fortune away. Bella has dreams of marrying one very particular handsome suitor, but with the restrictions of regency society, that can't happen unless she restores her family wealth and reputation. Which you accomplish, naturally, by playing lots and lots of solitaire. Nothing weird about that. That's how we paid off our house. With 180 levels spread across 20 chapters, a beautiful, hand-drawn art style, and a few twists on the familiar solitaire formula, Regency Solitaire is an absolute pleasure for slow, relaxing card game strategy from start to finish. 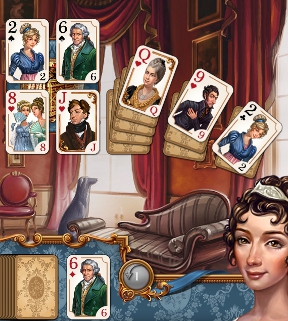 Regency Solitaire largely assumes you're familiar with the base game's rules, and even if you aren't, it's not hard. You need to click cards that follow the one face-up beside your deck at the bottom of the screen in ascending or descending order, so for example if you had a five, you could play either a six or a four, and the more you keep this chain going, the better you do. If you can't make any moves, you can play a card from your deck to replace the current face-up card, and you've also got a limited number of undo options per level. Each chapter may have a different set of requirements, such as unearthing items hidden beneath the cards or achieving different combo chains, and you'll even discover different types of cards along the way. Some are fairly straightforward, such as the wildcards that you can play in a pinch, while others actually help or hinder the cards on the boards... you may need to find a key to unlock a locked card, for instance. If you're having trouble, don't forget to spend Bella's winnings in her home! The decorations you can buy are more than just, well, decorations... they actually give you helpful bonuses, like Edward's portrait which turns over 15% of the cards at the start of each level, or Bella's gloves, which gives you an additional undo.

If this format strikes you as familiar, it may be because you played Fairway Solitaire, which was programmed by one of Grey Alien's team. Regency Solitaire is as beautiful, clean, and elegant as the time period it represents, with just enough new card mechanics and power-ups to make things interesting without cluttering up the concept. The only element I personally wasn't wild about was the way the game laid the cards out in increasingly intricate patterns that included cards being upsidedown, sideways, or otherwise sharply angled... it's not something everyone will have a problem with, but it's something I found a strain on my eyes. The story that plays out at the beginning and end of chapters is a nice addition, though it would have been nice if it was woven into the gameplay a little more so we saw more of it. Still, Regency Solitaire is clearly a lovingly composed card game from top to bottom, with enough levels to keep you satisfied for a long time, especially if you're aiming for perfect hands in normal and hard difficulty. Its gorgeous illustrations and meaty amount of levels make it the sort of game I'd recommend enjoying with a cup of your favourite tea in your coziest chair. It doesn't reinvent the formula, but it does refine it, and Regency Solitaire is a fine little treat indeed.

I would love to play this...if it was on Steam

Hi there, I'm the develop of this game. We'd love to see it on Steam too! Unfortunately it seems to be quite hard to get casual games on Steam as they don't get many votes on Greenlight. We are trying to get it on there though. So keep any eye out for it.

Hi there, I'm the dev and I hope you don't mind me leaving a link to the Steam Greenlight page for Regency Solitaire as we would really appreciate some votes. Thanks!

I got this game on Game House. I am not a big one for solitaire (or any other card games)as I prefer hidden object games but since nothing else was on I decided to try it. I am absolutely hooked on it. I sat for 6 hours playing it until my legs went numb and no housework gone done! However, forgive me if I am stupid but I can't figure out how to use the wild cards and am stuck at one chapter because I can't get a run of 14 cards. Please, how do the wild cards fit in? I have had a run of 13 but ended up back at the beginning again. Many thanks for this game and I have given you thumbs up everywhere I could.
Sincerely,
Kate
Victoria BC Canada.

Hi Kate! So glad you like the game, thanks for letting me know.

Basically if you have a nice bunch of wildcards (and jokers) and then you get a long run, but it's not quite long enough, you can use a joker or wildcard to keep it going. You know how with a joker you can click it and it goes on the foundation (next to the stock pile) and then you can click ANY value tableau card? Well Wildcards work the same except you can only click a tableau card one higher or lower than the VALUE on the wildcard. Does that make sense? You can click on jokers and wildcards whenever you want but I'd personally wait until your long run is just about to come to an end, and try to use them then. Good luck!

There's also a How To Play screen which you can access via the in-game menu with more tips.

The game launch on Steam! Here's a link (though naturally we prefer it if you buy direct from us - we'll give you a Steam key as well!): http://store.steampowered.com/app/351090/