Castle: Never Judge A Book By Its Cover

When a New York City book critic is murdered, dressed up to look like Frankenstein's monster, and hooked up to an electrical current, it's time to call the one detective who actually prefers the really weird cases: Kate Beckett. If she brings her "consultant," a mystery writer named Richard Castle, along with her, so much the better. Such is the premise of Castle: Never Judge A Book By Its Cover, a tie-in hidden object game that was written as a companion to the television show Castle. The case turns out to be more complicated than they had anticipated, and as the team works to keep the body count from increasing, the case begins to hit closer and closer to home for everyone. 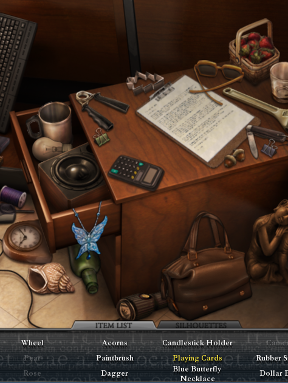 Never Judge A Book By Its Cover is an exceptionally well made and quite polished. Gunnar Games worked with Castle's writers while creating the game, so the references to the show aren't simply pasted on after the fact. Most of the hidden object scenes contain at least one item from the show, from Castle's bulletproof "WRITER" vest to a certain red bottle of scotch.

This doesn't mean you have to be a fan of the show in order to enjoy the game, though: they've taken pains to make sure the game stands on its own merits and doesn't divulge plot or character spoilers. The game blends hidden object scenes and minigames seamlessly, allowing you to view the silhouette of any item you're searching for and skip any puzzle that's just too frustrating. One unique element of the game is the puzzle that lets you question suspects: while many games would let you choose from a list of questions, or just make the dialogue into a cutscene, here you have to match each piece of evidence to the place where it was found. 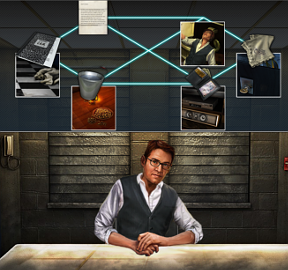 The end result is a game that plays like an actual episode of Castle and has something for just about everyone. Fans of the show — and of murder mysteries in general — will enjoy trying to figure out the Hardcover Killer's identity. Fans of hidden object games will lose themselves in the detailed, interactive scenes. Fans of puzzles will be baffled in the best of ways as they try to unlock the next door or uncover the next clue. And fans of Nathan Fillion can always just spend a while staring at Castle.

Wow - I was looking at this game, but that community score is very low. Can anyone who's given such a score say why they didn't like it?

Lacking other comments explaining their baffling negativity, all I can say is that everyone on the review list greatly enjoyed it both as fans AND as a game in its own right. :) Maybe they experienced a technical issue? Whatever the case, I would urge people to try the demo and ensure that it works for them and form their own opinions... especially since nobody here has seen fit to deliver theirs.

I haven't given the game a low score, but I've played it and enjoyed it. There are some issues - I played at the expert difficulty setting, so I don't know if it's different in the lower setting, but the puzzles were uneven - some were very easy and a couple were very challenging. Also, the plot is even more ridiculous than the average episode of Castle, and the game mechanics of picking up random objects really didn't match the plotline very well (would you really believe that a police detective would, for example, vandalize furniture at an evidence site to get a spring that will help you fix furniture somewhere else?)

But those nitpicks aside, this is a really enjoyable hidden object game. As long as you accept it for that - a good quality hidden object game with Castle characters popping in every so often to comment, rather than an attempt to actually plausibly recreate a Castle episode - you'll enjoy it.

I did a cursory look through the ratings table in the database and I noticed a lot of ratings for this game all coming from the same IP subnet, which indicates possible fraudulent activity.

I've deleted all the votes in the database within that subnet range, so hopefully the resulting rating will reflect a more random sampling of visitors.

Some games, and this is one, have several very hard challenges. After working on a challenge for 10 - 15 minutes trying to figure what sequence of 25 buttons must be clicked in what order I start looking for the "SKIP" button. There is none. And this is "Casual" mode. Wonder what the "Hard" mode is like.

There's a Skip button, StageCoachDriver. Should be in the lower right corner, where the "hint" option is during regular gameplay. It takes a while to fill up.