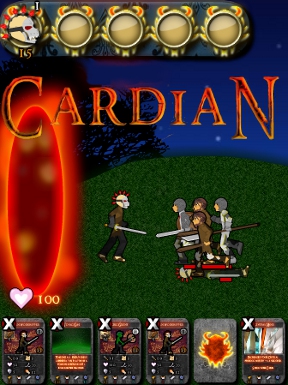 You kids today and your fancy addictive games of chance. In my day we had Pog, and we got into fights on the playground over who had the best Slammers! But no, not you guys. You need action and strategy and apparently you can't get that by hurling a metal disc at cheaply made cardboard circles. But you can get it with Undefined's new defense title Cardian. Choose from one of three different card decks to battle your way up through the ranks of card masters. While it may not look it, gameplay is actually fairly simple. Your portal is on the left, and your opponent's portal is all the way on the right; you want to use your cards to summon recruits that will defend you and eventually overwhelm your opponent's portal before they destroy yours. Click on a card at the bottom to play it if you have the gold and resources necessary, and click on a troop icon in the upper-left corner of the screen to deploy as many units as you can. Destroy the opposing portal and you'll gain gold you can spend on upgrading your deck so you can purchase better cards to fight more strategically.

Well, I say "strategically", but naturally the fact of the matter is that you wind up needing a little luck, too. You can only buy cards through booster packs, and as anyone who has ever dabbled in certain fantasy themed card games knows you can't rely on a booster pack to give you anything you really need with frequency. If you get carried away and create a deck that's too big, you also run the risk of the game giving you every card except the one you'd need during combat. This is mitigated somewhat by the fact that until you actually get down to bid-nezz and start hurling troops at your foe in earnest, they only make a token effort to bother you with enemies, so as long as you can sit through a few piddling attacks, you can hoard your resources until you have enough to steamroll over any and all opposition.

Still, Cardian still manages to be entertaining and enjoyable not only from that gotta catch 'em all addictive card-gathering standpoint, but from how simple it is to pick up. Once you get the hang of things and build yourself a deck with the proper ratio of stabby-to-resources (something fans of Baten Kaitos are probably already familiar with) you'll be flooding the battlefield with horrendous nightmarish monstrosities or noble upright defenders of truth and light in no time. (Both are reasonable options, but I can tell you which one is awesomer.) Despite some balance issues and the fickle assistance of Lady Luck, fans of defense hybrids and Undefined's own work will find a lot to enjoy here and a solid little title to while away your spare time.

My favorite deck is all Gold Mines and Fresh Skeletons. I call it "Relentless Rats".

Needs a serious rework. Seems HEAVILY slated against the player. NPC's have either LARGE starting resources or unlimited. They can "summon" faster and with more than the player. They are also equipped with annoying monsters that can instantly slay anything you bring out. The first level itself is VERY hard to beat.

Anyone know how you are suppose to purchase the Redeemer Packs?

I've gotten to the point where I've beaten 17 of the 18 levels, but the frakking beholders are pretty much leveling anything I throw at them.

Part of the problem is something observed by a lot of commenters at Kongregate: the UI is abysmal, particularly in the deck-building area. The cards don't sort well, they're too small to see, they're spread out in a line you have to scroll through, they're impossible to rearrange within your deck (so that you can't, say, put the Gold Mines together to easily see how many you have). I have a feeling I could build a deck to defeat this last level, if only I could build a deck.

As a quick followup to my previous comment: if anyone's looking for a good way to beat an overpowering enemy, Ben's comment above inspired me:

Build a deck out of as many of your weakest fighters as you can muster, a whole lot of gold-generating cards, a few crystal-generating cards...and the cards "Kamikaze" and "Parting Shot", which cause damage to the opponent's portal every time one of your own soldiers dies.

Redeemer Packs are purchased by tearing up cards in the Card Browser. Actually, I thought the game was pretty easy, the AI is not really all that good, though sometimes they do seem like they have unlimited resources. A good thing to remember is that the AI is constantly producing units, so a "rush" tactic will work extremely well. Simply build up a lot of gold and rush with a lot of really cheap units (with a couple of heavy hitters up in front) and you should win the level. Don't worry about the enemy attacking your portal- they never rush, so it'll take forever for them to knock it down. By the time they do, you'll have stockpiled enough money to summon all of your units at once and wipe the floor with him. This is how I beat every level. (oh, and another hot tip: have as many gold mines in your deck as possible, and always play gold mines first if you have them in your hand)

Elements is an all-around better game, I think...

Here's a deck that beats all levels, every game, without taking a point of damage: