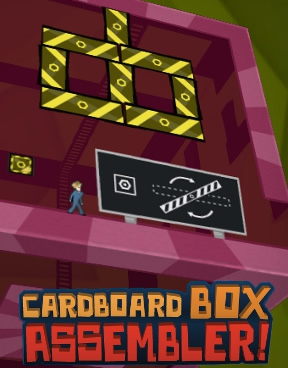 Life's a party when you're a Cardboard Box Assembler in Fernando Ramallo and Miguel Ángel Perez Martínez's latest puzzle platformer game! All that monotony, the drudgery, the tedious, repetitive work for no respect and low level pay... awwwww yeah. There's an added perk too, of course, in that if you do enough of it, it just might drive you to have a psychotic episode that transports you to a magical 3D realm with topsy-turvy terrain, magical doors, and shiny gems. Will you ever find your way back? More importantly, do you even want to after a flashy, animated intro like that? (I think I need to go lay down. I feel like my eyeballs just gorged on every anime, ever.)

The world you're in may be unusual, but the controls are pretty straightforward. The [WASD] or [arrow] keys move your intrepid box warrior, and the [spacebar] lets you jump. In each stage, the goal is to get to the exit after collecting any keys you need to do so (the icon in the upper right corner tells you how many keys are left on a level.). Climb around, over, and under every level, in more than one direction, and you'll quickly begin to see where the real challenge lies. You'll also be able to grab gems, which are optional, but unlock special bonus worlds where you can get special upgrades like the eye-watering "3D Anaglyph Mode" for those of you who still have a pair of red and blue 3D glasses banging around (or the means to make your own). Don't worry if you miss a gem, since they're completely optional and you can replay any level you like.

As you progress through this strange boxy wonderland, you'll encounter different obstacles and mechanics you'll need to master in order to proceed, from switches that operate platforms, to switches that flip the gravity. You can't die no matter how far you fall (it seems our hero has Adamantium knees), and the only thing the timer influences is your score. So take your time, take a leap of faith or two, and you'll be the master of your strange domain... eventually. 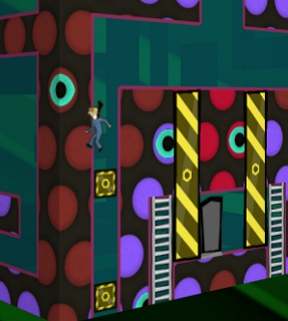 Analysis: Cardboard Box Assembler basically winds up feeling a lot like the swankier cousin of Sophie Houlden's BOXGAME, and I mean that in the best possible way. It takes the basic concept and expands upon it, creating something that's smooth and very engaging to play. You never feel like you're fighting the camera with its fixed location, and the box never shifts beneath you as it moves in an unpredictable manner. While mentally keeping track of where any keys and gems are as you try to figure out how to maneuver yourself to get back around to them can be difficult, the fact that you can see the silhouette of the terrain through the box's background can usually help you figure out where you are.

My biggest criticism might actually be that as slick and wonderfully silly as the whole presentation is, the game feels like it's a bit slow to actually get rolling. The game is very slow to introduce new elements initially, so the first three worlds (or "trips") wind up looking and feeling very similar aside from their increasingly complex designs. The bonus worlds are actually the most interesting, both visually and conceptually, and I wish more of that weird/puzzling vibe had been present in more of the standard levels. The farther you go, however, the more intricate and clever the mechanics get until you really feel less like you're just falling around randomly hoping to land on a key and more as if you're actively figuring them out, and after the first four worlds, you'll really have your Big Boy/Girl Puzzle Pants on.

From its clean design to its clever puzzles, to say nothing of its silly cutscenes, Cardboard Box Assembler is both a great way to spend an afternoon, and marks the emergence of a bold new hero that represents the everyman. Provided the everyman has gone insane once in a while after the end of a long work week and willingly hurled themselves out of a window. I think we've all been there. (Ask Jay sometime about how much I've cost him in repairs.) Neither overly complex nor too simplistic, Cardboard Box Assembler is just plain fun, and a great example of the genre. The next time your work gets a bit too much for you, slap a cardboard box on your head, ignore the stares and whispers, and remember that there's someone out there who gets you.

Yeah, the concept does looks like BOXGAME, though it is 3D and no ads :D

Gah!!! This blasted level with all of the false doors is driving me insane... Help a buddy out with a walkthrough maybe?

...but the camera ISN'T fixed!

That "brown" game-in-game is awful...

I played long enough to unlock the 3D mode.

I had to put it away at that point, though, because I realize that if I didn't, suddenly it would be six hours later. (We all know that feeling, right?)

For the level with all the doors, this path worked for me (I am assuming it isn't randomized like some other elements):

To get the gems, though... you're on your own (though one of them is impossible to get until after you've gotten every other gem, so don't get too frustrated).

Does anybody know what the second unlockable item does? Does it have any effect besides a different appearance?

Seconding Vogo's comment - the game within a game is awful.

The rest is fantastic. The mid-level cutscenes are short and cute, and the worlds as short enough that they never outlive their stay. The level gimmicks are varied and fun.

Some of the later levels are awfully complicated, though, to the point that I solved them mostly by trial and error. The best levels are the ones that featured a single trick that makes the level easy once you figure it out (for example, when you have to use the same turner-tile twice in a row to reach the middle).

The bonus levels are all fun and introduce goofy new tricks, except the third bonus level which is really dull and time consuming.

I played through in one sitting and enjoyed every minute. Good game!

How do you play the game-within-a-game?

Anyone figured out the final bonus room yet?

For the final bonus room, I found it helped to use the Flat Mode unlockable so you could more easily keep track of where you were in relation to the exit. I finished it eventually, but it was all trial-and-error, jumping off ladders and holding various directions to see where I could land.

Won't load, just won't load in FF, GChrome or IE, with latest flash.
do I miss a plugin?

I'm in one of the bonus rooms, trying to play that game-within-a-game:

How in the heck do I win it?! I keep getting poo!

I LOVED that cowboy bebop style intro. And the graphics move incredibly smooth considering it's in 3D. Very impressive

This game rocks. I'm amazed that it doesn't use Unity. That's impressive.

To get the first two gems in the teleporty level:

Interesting, but not for me... Perhaps its a sleep-deprived thing, but I just can't wrap my head around to understand the levels... Loved the intro animations, though!

Anyone know how to get the code for the second bonus world (the one with the counter), or the last gem for the 4th world in Trip VIII (the one with all the doors)?

The code in the second bonus world

Is random each time. Run to the other side of the world and push the button and you will be informed if the code (represented by ???) is higher or lower than the number you input. Start with 500 and you can cut the number of possibilities in half right at the start.

You have infinite time to solve it so just keep trying until you get it.

Wow, this game embodies coolness and the whole rollercoaster ride feel is fun, once I got past the motion sickness.
There was almost a moment of eye-candy in the opening credits, but I'm not big on hairy chests... :)

For anyone still stuck, I just finished a video walkthrough. It gets all of the gems and completes all but one of the levels in under par time.

You can find the first part (of 3) here: http://www.youtube.com/watch?v=oEfu7lt8oik

What button do you press to active Flat and Prophet modes?

Game still doesn't load, did I do something wrong?

[The game is loading just fine. You might want to try updating your Flash Player. Also try disabling any browser extensions (ad blockers) you may have installed. They tend to interfere with free, ad-supported, Flash games. -Jay]

to JIguest. there's a pattern on the doors. you just have to figure it out. if frustrated me as well.

Just discovered this game. I have an easy little trick to beat the 3rd bonus level mini-game.

Just put your hand over the screen so that only the farthest right portion of the box is visible (and the poo is invisible). Now your eyes don't need to differentiate between the shape of the poo and the box. Just press space bar every time you see anything there and you'll get past the game easily. It actually makes it easiest to play when everything's moving fastest.

Now does anyone know what prophet mode actually does?

That would be "brink" of insanity, Freudian slip me thinks?

For anyone who may have Chad T. Lower's problem with character control, try clicking in the game window (click several times if you must).

That's how I solved the problem on my computer.

slick; fairly well done; wonkier controls than anything made by this large a company should ever have; nowhere near as good as sequester, &, obviously, not as innovative as the original, BOXGAME.