Ready for a creepy new adventure game? Then maybe you should point-and-click the lights out (ba-dum-tsh!) and give this a try. Campfire Legends: The Babysitter, a point-and-click horror adventure, is a new spin on the classic urban legend every teenage girl has probably heard at least once. Looking to pick up a bit of extra cash, as well as a recommendation from her Dean for medical school, Lisa agrees to babysit his twin daughters one night. Naturally the Laws of Scary Stories dictate this particular family must live in a suitably spooky old house frequently backlit by lightning flashes, but Lisa isn't afraid. Probably thinks her enormous purple plastic bracelets and high-tech portable cassette player will protect her. Ah, the 80's! 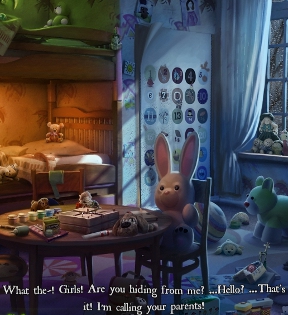 The twins don't seem to want her around. At least, Libby doesn't, whose rare skin condition has left her sullen and unfriendly. When strange things happening, Lisa starts to get impatient with the girls... even though Maggie insists everything is the work of Libby's imaginary friend, Nate, who lives in the closet. Kids today, amirite? As Lisa, you'll explore the old house, tracking down objects needed to complete puzzles, and doing important babysitter duties, like making hot chocolate for the twins, assuming the deep, angry male voice on the phone ordering you out of the house is a six-year-old girl playing a prank, and not informing the lady of the house about the figure you saw in the upstairs window before she leaves. Atta girl, Lisa. It's always important to provide a good role model for young girls who might someday want to be knocked unconscious by a madman.

Unlike most hidden-object games, the only items you'll ever be required to look for are items you actually need. The game will tell you what items you need for a specific task, and you'll have to track them down.The hint system comes in the form of fireflies that can be found scattered everywhere; each one is worth one hint, and since you need three of them to skip a puzzle, you'll want to keep your eyes peeled for them. (Up to five can be carried.) Their location in each room is random, so don't assume that just because one isn't in the last place you saw it doesn't mean it's missing.

Analysis: Having been an enormous fan of The Hookman, the first game in the Campfire Legends series, I can't tell you how happy I was to discover that not only was the series being continued, it was being held to the same high standards. The game is visually impressive and generally very well acted, if it tends to rely a bit too much on excessively dramatic music. Playing The Babysitter is a lot like playing a 1980's B horror movie, minus a montage of the heroine trying on silly hats. It's fun, it's campy, and even scary. Of course, the potential problem with that is that there are quite a lot of jump scares in this game, particularly towards the end, so you might want to think twice about playing this one if you hate things being thrown at your face while the music goes REEEEEEE! 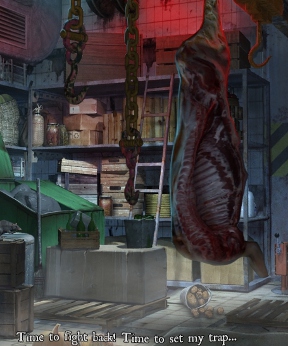 The Babysitter doesn't just take a few steps to the left of its source material; it catches a plane to another part of the country and puts on a goofy disguise. The original story is probably a lot scarier, with its simple premise and ambiguity, but the game's plot is a lot more complex, and thus a lot more interesting. Things get weird very quickly, and finding out just what is going on is a great incentive to keep at it. Of course, the question remains whether you can forgive being forced to play a character who does all the stupid things you yell at people not to do in a movie. Don't go down the stairs, don't go down the stairs... "I think I'll go down the stairs!" YOU FOOL!

It's just unfortunate, then, that the latter half of the game winds up dragging its feet due to some tedious item collecting. You spend far too much time scouring the environment for tiny items, and more often than not, as soon as you finish with that one list, you're presented with another. Since items can be very small and very carefully hidden in dark areas, chances are you will wind up using hints. This wouldn't be that big of a deal, except the hint system isn't very helpful in tracking down those little items unless there's one in the room. Click on a firefly, and unless there's an object you need in your immediate vicinity, you'll probably waste a hint because the game will just vaguely point you towards another room, or just tell you that you should solve the puzzle.

While it lacks the tight gameplay design of its predecessor, The Hookman, Campfire Legends: The Babysitter, is still a beautifully made and highly enjoyable title that is well worth your time if you're looking for something fun and even a little scary as everyone's favourite BOOGA BOOGA holiday approaches. Which leaves us with only one thing left to say... THIS REVIEW IS COMING FROM INSIDE THE HOUSE!

Hanging back the mirror/Cleaning Master Bedroom

Finding and opening the Elevator

Opening door with the turn wheel

I must say that I'm becoming rather disappointed with the selection of games here. I used to come to jayisgames because of the awesome collection of free browser-based games that were presented. Now - here's 10 (count them, 10!) download only features in a row, 9 of which (that's 90%) are just demos of pay-to-play games. Please please please go back to your roots, and avoid the commercialization that it's so easy to drift into!

Zennehoy, if you've been coming here a long time, you should know by now that the weekends are ALWAYS download games. :) It's not commercialisation, it's a matter of making ends meet. Download games are important not only because many of our visitors play them, they also help us pay the bills, which can get hefty indeed running a site this big. We hope we at least have the support of the community as far as continuing to function!

If you don't want to see download games, ignore the weekend reviews; from Monday to Friday afternoon, we ONLY feature browser games, usually upwards of three a day. The site schedule is on the top left of the site, in a green box just below the banner and navigation links.

@Zennehoy - You're confusing ads for features on the JIG homepage. So far this weekend we have featured only 4 reviews for downloads with demos. (And they are all exceptionally good!)

Our weekly Weekend Download feature brings you the best from the indie FREEware scene, too.

The ratio of FREE to NOT FREE content on this site continues to be quite high, at greater than 5:1

If all you want are browser games, then you might want to bookmark our browser games tag listing page: https://jayisgames.com/tag/browser and visit that page exclusively. You'll only see browser games appear on that page.

I've got to admit, I've never seen that green box before...I guess it's in a "blind spot" for me.

Quite loving this game myself, except for that one issue where twice it crashed, once where I wasn't too far into, the second time I was near done with the game.. and upon starting it again.. it hadnt saved any data of my gameplay, I had to start over from the start.

Otherwise, it's a good game the searching is somewhat intense for some of the 'level's, but otherwise it is a wonderful game.

Dang. Am I the only one not able to install this game?

[What trouble are you having? You might want to contact Customer Support if you downloaded the game using the links here on this site. -Jay]

Hanging back the mirror/Cleaning Master Bedroom

Finding and opening the Elevator

Opening door with the turn wheel

can't install either. after the great "hookman" I was eager to try this, but the game quits every time after the loading screen...

[Please contact Customer Support about the issue. If they don't know about your installing problem, they can't fix it. Thank you! :) -Jay]

so i'm having an issue that when i'm playing the game, it's partially off the right side of the screen so i can't click on some of the items. anyone have any ideas how to fix this? i've tried to change the resolution of my computer and it doesn't do anything.

[Please contact Customer Support about this issue. They will be able to help you in a much more personal and attentive manner than we can do here on site. If you don't receive the help that you need, please contact us at our contact address found in the site footer. -Jay]

So I got through the game, but something happened during the cut-scene where

Libby and the babysitter meet up in the lab right before the chase. The babysitter says something like, "We have to get out of here!" and something happens to Libby. Someone tell me what happened to her please?