Growing up is naturally one of life's most fun adventures. But with that being said, it can also be challenging. Sometimes these challenges come in all sorts of shapes, sizes, and several different adjectives.

Butterfly Soup is labelled on the tin as a game about "gay Asian girls playing baseball and falling in love" but that one-clause description really doesn't do it justice. The meticulous attention to detail and effort placed into character development set it a tier above many others in the genre. Using an optional feature showing the internal thoughts of the characters, you are shown a much more complete picture of their thoughts, feelings, and fears. The pacing of the story is also constructed well, showing how the four girls' stories intertwine as you change point of view throughout the game from one girl on to the next.

Another interesting aspect of the story is the interpretation of news and current events through the lens of children in the story. At different points, the narrative flashes back and forth between the girls being in third and ninth grade. They seem aware of major political events (i.e., Obama won the 2008 election), but the recognition and knowledge is at the same time ephemeral. When there is a discussion as to why there are so few Asian people on television, they reason that even though Asians are a substantial chunk of the population, very few go into journalism because their parents feel it is too risky. One of their brothers cites a statistic that, in fact, only 4% of the national population is Asian, despite the proportion in their immediate school and neighborhood which appears empirically much higher. They dismiss him as having misread the number due to his dyslexia, and though he promises to show them the newspaper clipping, it never surfaces. It is on some level a charming, endearing characterization of how your younger self might have experienced these things. 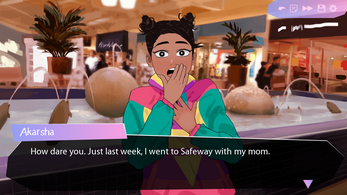 Butterfly Soup also illustrates how its cast of characters cope with challenges and separation, something often out of their control. Near the beginning, one of the girls finds out that her inseparable friend is moving away across the country. When? Tomorrow. And it cuts like a knife. Is it the end of their friendship? Will they ever hear from each other again? While I could tell you, I'm not going to give you the spoiler and you'll have to find out yourself!

This piece fits squarely into the visual novel genre and is beautifully rendered with a unique style. Brianna Lei appears to start from a photograph of a scene, but then give it a brush-up with a paintbrush-like affect. This creates a vivid rendition halfway between an acrylic painting and a photograph, with a charming, almost unique feel. Although a couple of the backgrounds look a little more similar to one side of this spectrum than the other, overall the artwork is fairly consistent and holds together well. The characters themselves are drawn as cartoons, with several different facial expressions to show reaction to surprise, shock, and other emotions.

The game is controlled with the mouse to advance the dialogue, and at times, choose from various options in conversation or actions. Footprint type icons navigate between different areas, and at times specific places must be visited to advance the story. It is played in four acts, one from the point of view of each of the four Asian girls in the game. While Butterfly Soup addresses in particular addresses the challenges of not quite being understood and trying to figure out orientation as a kid, I think it presents some reflection of all of us and growing up. As one of the characters explains in the game, before a caterpillar can turn into a butterfly, it must first form a chrysalis. Somewhere in the interim, it is "butterfly soup," but in the end it emerges, beautiful, wings spread, ready to fly. And I think that if you can relate to that sort of experience, you will find Butterfly Soup very touching.