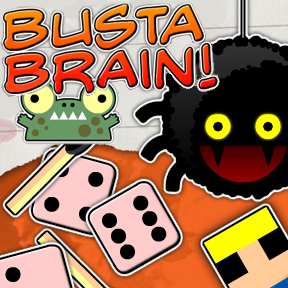 How's your brain doing today? Is it bright and refreshed, with all synapses firing, ready to tackle the demands of the day? Or is it in a thick foggy haze punctuated by a few nervous twitches, screaming out to return to its slumber? Let's find out, shall we? Developer Ninjadoodle (known for their click-tracking, one button offerings) presents their latest challenge to your gray matter called Bustabrain, a short amusing title that should appeal to puzzle and minigame fans alike.

Bustabrain's gameplay takes Ninjadoodle's One Button Bob technology and merges it with a series of 39 Warioware-esque mini brain games. There are various puzzles inside, including rebuses, matchstick movers, memory games, pattern recognition sequences, and even a few action bits. Each game only requires mouse clicks or drag-and-drops, and shouldn't take you longer than a minute. There are a few levels, however, that are more involved, literally requiring you to think outside the box.

Overall, Ninjadoodle's latest game is a fun, limited offering. With its cute, simple mix of graphic styles and swinging soundtrack, the game is entertaining to play through. Its replay value only consists of beating your last total click score, however, which becomes much easier the second time around. Regardless, Bustabrain is a nice game to beat on your break, and might even help get that squishy stuff up there in your head moving again.

Update: Ninjadoodle has responded to the feedback about the bubble levels and made some changes. Those levels should be less frustrating now. :)

This walkthrough will try to get you through all 39 levels in the least number of clicks possible. Wicked!

I ran through the first 20 levels before giving up on this; it was just too easy and straightforward. Cute, but not enough of a challenge.

The bubble games made me gain so much clicks !

I had to stop at level 20. When I went back to pick up where I left off, I find out that I had to start from the beginning. Why not let me save my progress?

Entertaining nonetheless. I'll bookmark for a when I have more time to work it all the way through.

I must be an idiot as I cannot get past level 26. The lights are driving me nuts.

This walkthrough will try to get you through all 39 levels in the least number of clicks possible. Wicked!

I'm going to rate this game as "okay". It could've done better, but those [email protected]%&* bubble-collecting puzzles make me want to put my computer through a wall.

Owww no progress saving? I played to level 30 something, and had other things to do ... to get back to it later ... now it starts at level 1 again :-/ I dont mind doing the puzzles again, as once you know it its easy. But I dont quite feel like doing arcade-dont touch the walls levels inbetween -again.

The bubble levels were absolutely stupid and ruined the whole game. Liked the puzzles otherwise, but bailed out on the last bubble level. I wonder what cool puzzles I missed out on?

I'm not sure why, but some of the games recently do not fit within the window, like this one. There is a box on screen in which the game is supposed to be, but when it loads, it's as if you had zoomed in a bit on the game, thereby cutting off the edges. Which, in this game, makes it nearly impossible to read the instructions.

[Sounds like your browser is zoomed. Check this Support FAQ for how to fix it. -Jay]

The game would have been great if it weren't for the bubble parts. it ruined the game. I quit playing after the second bubble part because it was too frustrating. puzzle games should be about clever thinking, not rely on your good timing.

Would have been a blast.
Most levels were really fun.

Bubble puzzles are a game killer here.
Pull them out and you've got a winner!

I read your comments and made some changes to the bubble levels. They should hopefully be a bit less frustrating now :)

Thanks for the feedback!

Sorry, just forgot to say that you will need to delete your browser cache if you want to play the new version.

Much better with the changes to the bubble levels. I can play the game all the way to the end now, without feeling like stabbing someone!

Is level 32 supposed to be purposely misleading or is the picture drawn incorrectly (or am I seeing it wrong)? If the smilies are facing forward it looks like there would be 6 rows across the bottom but five rows across the top.

I think level 32 is incorrectly drawn too.