Hey kids and former kids! Welcome to our new weekly feature, where we post some of the best gaming bundles that pop up during the week. Personally, I love a deal, especially when it comes to games, and with the popularity of the Humble Bundle, these suckers are everywhere now. So while I was filling my game library up with more and more titles I may never play (because why would I actually play a new game when I could just replay Chrono Trigger or Azure Dreams for the ten thousandth time), it occurred to me that you fine folks might like to know about some of the bundles that cross our path. Each Sunday, we'll post a handful of some of the best bundles that have popped up, and you can feel free to share your own on the comments. To be clear, we don't get any sort of affiliate revenue from this, we're just making sure that if we don't have any productivity because we're playing games, neither do you! We'll initially be keeping these posts limited to a few bundles as we tweak our format. This week: a visual novel/RPG hybrid with romance (including options for M/M and F/F), a triple pack of one of DC's greatest heroes in action/adventure format, an eerie indie adventure loosely based on an old Swedish tradition, and much more! 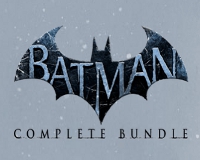 Developer(s): Rocksteady Studios, Warner Bros. Games
Genre(s): Action/Adventure
Platform: Mostly Windows, One Mac
Cost: $9.99USD
Seller: Bundle Stars
DRM: Redeems on Steam
Summary: Because my heart belongs to a certain dorky webslinger despite my new love affair with Gotham (baby Batman and Alfred aaaAAAAAA), the Dark Knight and I mostly tend to pass like ships in the night, but even I have to agree that he gets some really incredible action/adventure games. This bundle nets you Arkham Asylum GOTY, Arkham City GOTY, and Arkham Origins plus DLC and DLC season pass for less than what I would charge you to play with my Farscape action figures. This is a fantastic price, and if you've always wanted to give these a spin, this opportunity is calling your name. 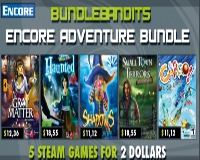 Developer(s): WizarBox Production, 8th Floor Games, dtp Entertainment, Ice-pick Lodge, Gunnar Games Genre(s): Point-and-Click Adventure, Hidden Object, Casual, Physics Sandbox
Platform: Windows Only
Cost: $2.00USD
Seller: Bundle Bandits
DRM: Redeems on Steam
Summary: What's the last thing two dollars got you? Let me rephrase that... what's the last thing two dollars got you that was more than just a greasy fast food wrapper and indigestion? Bundle Bandits will take those two clams and trade you Gray Matter, Haunted, Shadows: Price of Our Sins, Cargo!: The Quest for Gravity, and Small Town Terrors: Pilgrim's Hook. For a lot of you, Gray Matter alone may make the sale, coming from the pen of none other than Jane Jensen (best known for the Gabriel Knight games), but if you're looking for quality casual games, Small Town Terror: Pilgrim's Hook is a stellar example of the hidden-object genre that's well worth checking out. 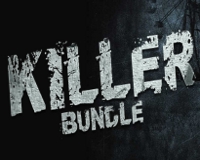 Developer(s): Vitali Kirpu, Alexander Poysky, Winter Wolves, Simogo, Eden Games, Hydravision Entertainment, Demon Wagon Studios, Noumena Studios, Z4g0 and Ivan Venturi Productions, GSC Game World, WildTangent, Vivid Games SA
Genre(s): Point-and-Click Adventure, Interactive Art, Action/Adventure, RPG, Roguelike, Sports, Visual Novel, Strategy
Platform: Mixed
Cost: $4.99USD
Seller: Bundle Stars
DRM: Redeems on Steam
Summary: Hoo boy. Talk about a random assortment, but this bundle of a whopping ten games has some real gems in there! Kraven Manor, Year Walk, Loren the Amazon Princess, Alone in the Dark, Fate: The Cursed King, Real Boxing, Pixel Piracy, Albedo: Eyes from Outer Space, S.T.A.L.K.E.R.: Shadow of Chernobyl, and Demonicon: The Dark Eye make for a tremendous amount of game time for a very tiny price tag, and for some seriously formidable developers to boot. Loren the Amazon Princess is a stellar hybrid of visual novel and RPG with optional romances that include M/M and F/F, while Year Walk is one seriously eerie adventure that sends you wandering through the woods encountering strange creatures. Any one of these games is worth the five bucks it'll take to nab them all, so this is a great deal with some awesome indie titles in the mix!

I don't see why you guys don't get some affiliate money from these bundles, especially if you believe they are worth buying (and as long as these offers appear only from time to time).

You do a great job and you are probably the best website to play casual web games.

Keep up the good work!

I think this is a fantastic idea. I wanted to play Arkham City again and I've had my eye on Year Walk and Loren the Amazon Princess. Year Walk alone is $5.99 on Steam. For $1 less, I got many other games, so if you can get some affiliate money out of this, go for it.

I agree with kainfury 100%. I think this site is still fantastic, and I've been a regular visitor for nearly a decade now!

Both of you are mega sweet, and we definitely appreciate the support! To my knowledge, there is no way for us to recoup any sort of affiliate revenue here, but we appreciate the sentiment. :)

Bundles are my weakness. I approve of this new feature, though I think it would be helpful to specify how long each bundle will be available.

I saw that there was a countdown when you click on the picture for each bundle.