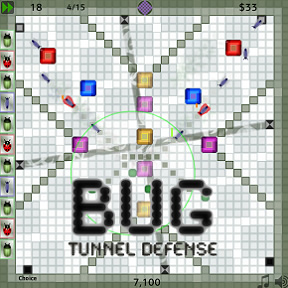 Bugs are really icky, aren't they? Some people fear spiders (yes, technically not bugs, I know, but creepy crawly nonetheless), some hate roaches, I even know one person who is freaked out by moths of all things. Granted, yes, there are those few (those strange few) who love insects and collect them and keep them as pets and whatnot, but for the most part those tiny things that crawl and fly are not our friends. In the newest tower defense game by John Blackburne, Bug Tunnel Defense, they are in fact our deadly enemies after an atomic war has laid waste to the rest of civilization, and the bugs are coming for what is left of humanity. So, not much different from the present day, really, minus the radiation and the end of civilization.

The aforementioned bugs (probably irradiated and definitely hungry) will wipe out mankind unless mankind manages to build some sort of defense against them. Unfortunately, these nasty little creatures have some tricks up their sleeves, such as the ability to tunnel below the hapless humans' defensive weapons, making them even harder to wipe out. It is up to you, as the defender of humanity, to figure out how to wipe out the insects before they wipe you out.

Bug Tunnel Defense is a free-form tower defense game, similar to Desktop Tower Defense or Bubble Tanks Tower Defense. The bugs will enter from one (or more) areas, and will head directly for the exits. The player can place various types of towers which have different ranges and abilities and which can cause more or less damage or shoot faster or slower depending on the type of tower and the upgrades you can get along the way. So far this sounds like, well, a lot of other tower defense games out there. You can use the towers to force the creepy little things to take certain paths and to hopefully wipe them out before they escape and demolish what's left of the human race. What Bug Tunnel Defense adds to the mix are those darn tunnels.

Ah yes, the tunnels. If the bugs manage to get into those tunnels they cannot be shot at until they come out the other side, which may or may not bring them closer to their goal of world domination. The addition of those tunnels (different for each level) is what adds a unique complexity to your basic tower defense strategy. Do you keep them from going into the tunnels? Or do you herd them into the tunnels and create a wall of fire at the other end, creating mass havoc and slaughter? Part of the fun is figuring out which strategy will serve you better.

You start with a basic amount of money for towers, and can earn more for every six-legged menace you squash like a...well, bug. The extra money can allow you to build more towers as the waves of insects keep coming and coming until a level is over. Between levels you can choose upgrades for your various towers, increasing their range, their damage points, or their rapidity in shooting. Each level is composed of a unique area, entrances and exits, and those annoying tunnels along with waves of insects that are slow or fast, strong or weak. You start each level with 25 "lives", losing one each time a bug gets through. Lose all 25 lives and you've lost the level.

With 5 levels of tutorial and 40 levels of gameplay Bug Tunnel Defense is short but pretty entertaining. You can go back to previous levels to try to get a perfect score, or to try out new and innovative strategies based on the tunnels, or just to watch the bugs get wiped out over and over again (presuming you're not one of those "bug lovers"). The graphics are simple and colorful, and the bugs are suitably creepy. If tower defense is your thing then try out Bug Tunnel Defense with its fun new twist on an old classic. And for heaven's sake, get those darn bugs before they wipe us all out.

In other words, until it gets fixed, just spam level zero towers. There's little point in upgrading towers now.

Can't seem to figure out how to get any of the "aphid" or "armor" achievements. They don't seem to work when I have them applied.

To obtain the aphid awards you need to be playing a level with aphids, so any level from the eighth onwards ("Frame") should do. The armor awards weren't being awarded on early levels, but the game has just been updated so it should work now.

One of the better tower defense games that I've played lately. I disagree with the review saying it's "short". This is one of the more time-consuming TD games out there.

All I can say is that this is the hardest defence game I've ever come across....

Maybe I'm missing something obvious, but by the time I start to think "oh, I've got this level worked out now", I usually die 15 seconds later!

I've gotten as far as level 9 - but by the time I use enough Sparks and Spikes to direct my traffic (because they're the cheapest), I'm broke, and death is imminent.

And why can I only use Stone after several minutes of play? If I have the chance, this happens just before I die as well....

Nope, not a short game, but it's meaty.

If it helps, Guthlaf, I try to run the two streams together sometimes, and turn the paths back on themselves, to make guns go further.

Thanks, Houseworkisevil (!) - I've tried, and I don't know if I'm just not upgrading enough before I meet my buggy doom, or...?

OK I was surprised by the "upgrades between levels" - the upgrades within each level are obvious (and standard). Upgrading between levels? Not something I expected....

OK, the between-level upgrades got me through 'Cheverons', but I confess, 'Scrolls' has me beaten. I surrender....

It's a fun game, but there is one thing I don't understand. How do the bonus tiles work? Do they have to be placed on the creeps' path? Or do they affect creeps regardless? Or maybe they only give that bonus to the tower placed on them? And if they do, does that tower have to kill the bug, or only hit it?
Other than the lack of this information in the help menu, it's quite easy to understand what to do in this game.

Kazeto: the tile bonuses apply to any tower placed on them. The shot speed bonus applies all the time but the score and cash bonuses only apply if that tower kills the bug. Generally for all bonuses you want your most upgraded towers on them, so they are getting the most kills. To indicate whether they are being applied when one of these bonuses is used it flashes its symbol in the border.

Thank you for your quickly response.
Also, I found a bug that I can cheat the game.
If I take 3 bonuses and select the last one (bottom), the bonus are locked and I can fill all the bonus place with the bonus selected.
I send the image of the bug
http://imageshack.us/photo/my-images/834/clipboard01vn.jpg

Which version are you playing? There was a bug in version 1.1 which could have caused that but I fixed that bug and another with version 1.1.1, the version now on JayIsGames. Unfortunately I have little control over the versions that are out there on hundreds of sites, and no way of checking which version they have short of finding them on the sites and playing them. The version number is in the top right corner of the main screen.