They say you never forget your first. Adventure game, that is. For me it was Charles Cecil's classic point-and-click tale of mystery and high-stakes adventure, Broken Sword: Shadow of the Templars. I played it on the Game Boy Advance, and I was instantly taken in by the narrative, the humour, and the adventure. Now Good Old Games has the whole series in one place. Broken Sword: Shadow of the Templars (Director's Cut), Broken Sword: The Smoking Mirror, and Broken Sword: The Sleeping Dragon from Revolution Software are adventure games that may have been around for a while, but still pack some serious pedigree. Any fan of the genre who hasn't already should check these games out, both to experience their adventure and lively stories, and to learn valuable life lessons... like, "Never trust a mime." 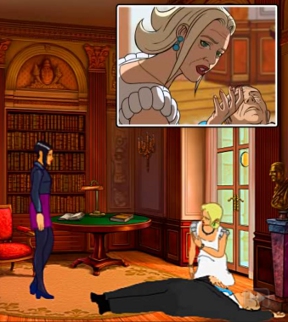 Imagine what would happen if you took Dan Brown's globe-spanning conspiracy stories, made them, you know, good, supplemented them with a cast full of likable, realistic characters and a lot of humour, and then turned it all into a video game. You'd get something that sort of approaches what Broken Sword is like. All three games follow George Stobbart, an American tourist, and Nicole "Nico" Collard, a French reporter. The two first meet in Shadow of the Templars, when Nico's investigation into a string of seemingly unrelated murders all over the world attracts the wrong kind of attention, and George finds himself in the wrong place at the wrong time when a bomb goes off inside a tiny cafe. Before long they find themselves embroiled in a dangerous mystery that involves a mime, a clown, a penguin... oh, and an ancient order known as the Knights Templar.

Things don't settle down for Nico and George even after they solve the mystery of the Shadow of the Templars. In The Smoking Mirror, Nico is kidnapped when she discovers a strange stone that may be connected to an ancient Mayan prophecy and an upcoming eclipse, and in The Sleeping Dragon George is stranded on the other side of the globe after a plane crash while Nico suddenly finds herself the prime suspect in a murder.

All three games are mostly traditional point-and-click adventures, relying more heavily on story-telling and problem solving than action. Moving a cursor over an interactive item will cause the item's name to pop up, and you can click to use it or pick it up. The first two games are played almost entirely with the mouse, while The Sleeping Dragon takes advantage of its 3D world to give you control over your characters, using the keyboard to move them around the environment. You should also save frequently, and in different slots, since the series has no qualms over rewarding poor choices with a GAME OVER screen for poor Nico and George. You'll find yourself in a multitude of dangerous situations that will need some very clever thinking (and maybe a hand-buzzer or two) to get out of. 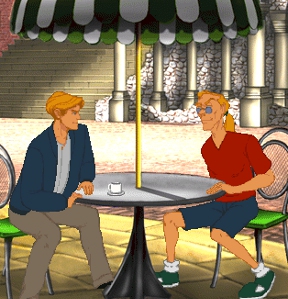 Analysis: While they might not require a behemoth PC from the future to run, the Broken Sword series has always had a very strong benchmark for all-around quality. As a whole the series has some tremendously strong presentation in every aspect. The musical score is fantastic, perfectly suited to each locale and knowing exactly when to pick up during certain events to add to the atmosphere. While the third game, The Sleeping Dragon, features more "modern" visuals with "3D" characters and environments, all vibrant and lush, the original two titles share classic hand-drawn artwork and carefully detailed pixel environments. The animation is fantastic, and adds to the expressiveness of the characters even more than the voice acting... which is perhaps a good thing, since, while earnest, not all the actors are equally talented.

Since all of the Broken Sword games are extremely story-driven, you spend a lot of time talking to other characters, watching cutscenes, or otherwise uncovering exposition. That's not to say there aren't scenes of action or other intensity, but players who prefer a more hands-on approach to their participation within a narrative may occasionally wind up feeling more like passengers. The other caveat is that Broken Sword is also fairly slow in that it takes its own time for everything; even I occasionally found myself getting impatient with how slowly it takes someone to walk across a room, or groping with some of the trickier sequences and item combinations. Did I ever have to resort to a walkthrough? Hey, that's between me and my pride. My poor, broken, wounded pride. 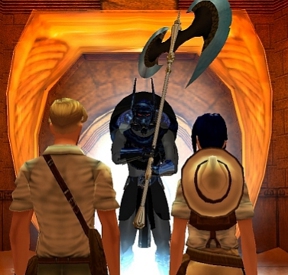 But if what you want is a story to engage you and give your brain a work out at the same time, Broken Sword will provide, and give you a chuckle along the way as well. Not all of the humour is spot on, of course; Nico and George do drop some groan-worthy cornball lines. But the whole theme of the series tends to lean that way in general, blending international (and ancient) mysteries with some light-hearted Indiana Jones-style humour and adventure that draws from real myth and history. The games are a fantastic example of storytelling, and the gameplay is just tricky enough to challenge if you pay attention and think creatively.

If you've already played the series before, you still might want to check out the Director's Cut of Shadow of the Templars (which was re-tooled and released for the iPhone), which features a welcome integrated hint system, remastered visuals and puzzles, and entirely new gameplay sequences where you play as Nico and uncover more of the story from her perspective. And here's some even better news; series creator Charles Cecil recently announced on Revolution Games' official blog that we can expect to see a remastered edition of The Smoking Mirror available of iOS devices very soon, as well as PC/Mac versions "very early next year". The adventure genre doesn't get much better than this, and while all three games aren't without their flaws, they're still tremendous fun and deserve to be experienced... whether for you it's all over again, or for the very first time.

Love these games. It's one of those games the whole family had to work on to get it finished. That goat was so frustrating, we struggled for weeks with that.

I always thought Broken Sword was significantly subpar to LucasArts' old adventures. Not to mention that in every single installment Nicole's voice gets more and more irritating. :)

However, the first one is definitely worth a buy. The sequel is pretty awful though, and the third one is ok but the 3rd dimension hinders more then it helps. I never got around to playing the 4th installment due to some graphical issues.

Bottom line, if you didn't play this, get at least the first game. It's not too difficult and it has a heftload of good old adventure goodness.

Btw review is somewhat misleading. There are very few Sierra-like GAME OVER screens in these games and it's quite obvious when you should be saving. Also, I think the 2nd game does away with them completely and the 3rd simply places you right back before the "death scene" - thankfully so, since some stealth sections are horribly irritating.

Hey, for only seven bucks for all three, I'm absolutely willing to give them a try. Thanks for the alert.

Hey, I used to have these somewhere. Time to dig out the old CDs and see if I can find them~

(PS why aren't they out on the DS yet? That thing is made for point'n'clicks.)