Electronics just never get a break. Us humans are always after the latest and greatest device with which to entertain ourselves. It's this exact attitude that creates toys-turned-platforming experts like that in Noel Berry's puzzle platformer, Broken Robot Love. Control the discarded toy robot as it strives to win back the affections of its boy-owner. This, of course, is no easy task what with pools of lava, laser beams and armed turrets. 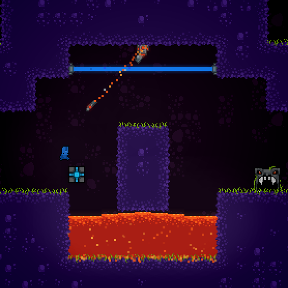 Move the robot with the [arrow] keys, and, when you've found a platform you just can't reach, activate its powers of block creation with [X]. But it would be too easy to just build yourself a staircase up. Instead, the blocks exist for a limited amount of time before winking out of existence. While this may prove frustrating at times, the tight controls leave you realizing there's no blaming the game. Finally, after 50 levels of careful planning and deft movements, do you think the boy will accept the robot with open arms? Will he change his mind about wanting a newer, better toy? Well, if his neglect continues to produce games like this, maybe it's better if he doesn't.

I love platformers. I love puzzles. I love "metroidvania"-style games. I love side scrollers. I love any combination of any of the above styles of games (and then some). But do you know what I hate, hate, HATE?? Games that rate your skill on in-game timers. You mean to tell me that I figured out the puzzles, had everything set up properly, and made it through but I only got 2 stars instead of 3 because I took an extra .68 seconds to get to the exit!?

The instant a game bases your score on any form of time constraint, regardless of how awesome the game could be, is an instant negation of any fun I can have from it.

I don't want to be pressured into completing a level faster. I don't want to replay the same level over and over, timing jumps perfectly just so I can shave another 1.48 seconds off my time to get the third star. Puzzle games should be a test of logic and skill, not speed.

What Cornelius Baxter said. I stopped playing after trying to get 3 stars on level 2 (level TWO!!) about 10 times and never getting closer than 0.2 seconds to the goal. Simple extrapolation made it obvious the game will be an exercise in frustration for me.

If you're having trouble getting three cogs (I, personally, was more interested in just completing the levels than doing them quickly), you may want to try the alternate controls of [WASD] and the mouse for blocks. It's a little quicker, though the menu will only recognize the other control scheme.