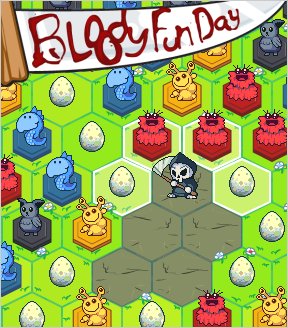 "You're the reaper! You like to kill things and harvest their tasty souls," begins the tutorial, and that sets the dark, whimsical tone for the entire game. Bloody Fun Day is a turn-based strategy game from Urban Squall (Battallion: Nemesis), built around the character of a cute little nihilistic, selfish grim reaper.

This is another take on SameGame-style color grouping, in the same general family as Knightfall. Your objective is to score as many points as possible by reaping the Cuties, who populate a hexagonally gridded island like dense, colorful game pieces. Their crime is incessant happiness and adorability. Their punishment is a gratuitously bloody death.

Move the reaper by clicking on adjacent cuties. Not only will you slay your target, but also every critter of the same species connected to it. You then absorb all of their souls, which have different effects depending on their color. The red cuties are most important, because they give you life, and with your life meter decreasing with every move you make, you'll need all the red souls you can get. Other colors go toward your various special reaper powers.

As you scythe your way through the cuties, you'll be creating a maze of obstacles for yourself. The reaper leaves behind an unwalkable barren wasteland; and slain creatures leave behind eggs, which decrease your points and won't hatch if you break them, and should therefore be avoided. Every few turns (indicated by a handy tracker on your left) all the eggs hatch, reforming the game board with a new assortment of prey. As you play, the interval between hatchings gets longer, making it more difficult to stay alive until the next reboot.

There are two modes: the 5-level challenge, where you try to score as many points as possible before the game ends; and the unlimited challenge, which is more of a survival mode, but still awards you medals based on your score. 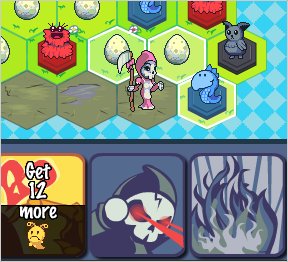 Analysis: It might seem at first that Bloody Fun Day is just a handsome but simple puzzle/strategy game, banking on cartoony violence for its appeal. It seems like it could perhaps use more variety, maybe some enemies, or differently-shaped islands as the levels progress.

But the truth is, although it might not hurt to include some extra features in the sequel, this is already an exceptionally well-crafted and deep game. The special powers are balanced and interesting, each one useful in several different circumstances. The three different families of powers support each other, making it feel like your efforts in one area can always be redirected to another.

For instance, the black ability Fire Storm can reap the souls from a group anywhere on the map. It's a great thing to keep handy when you're nearly out of life and need red souls quickly. But if you're already near a large group of red cuties, you might want to use Harvest, a blue ability that doubles the soul bounty of your next move. If you don't have enough souls to use Harvest immediately, you can use your charged-up Fire Storm to harvest the necessary blue souls from elsewhere. It's those kind of choices that keep Bloody Fun Day fresh long after a more loosely-designed game would be getting stale.

The big thing that's missing is special animations for your reaper powers. I mean, come on, there's an Eye Laser power, but when you use it, there's no big honkin' eye laser that fries the cuties into little black crispy bonsais. They just fall into bloody pieces as though you scythed them normally. What good is that? Even the Fire Blast power doesn't make, you know, a fire blast. Yo, what's up, Urban Squall?

Missed opportunities for carnage aside, though, Bloody Fun Day is a refreshingly original and strange video board game from a developer who gets more interesting with every new title. A bloody good time.

Wow, I'm surprised how deep this game is. It takes the whole Puzzle Quest-esque "make matches to earn mana" concept, simplifies it and turns the powers into a strategy element that will make or break your game.

I hear you on the custom animations for powers. We'll definitely do some shiny effects in the sequel, I promise. :)

Oh.. And thanks for the review! Glad you enjoyed the game!

This game is a lot of fun. I've been playing it over and over trying to get a combo where I can change a large group to red to match up with another red group, then use the power to harvest double souls from each. So far it has eluded me.

I have been playing this game since yesterday and I still can't get even the bronze on unlimited mode, or the silver on 5 level. This game is addictive. The music is fantastic, the graphics are perfect. The only thing this game needs are more animations, such as a dying animation instead of a prompt that tells you that you died. Different powers for different characters would be great. But yeah, even in a non-updated form, I would vote for this game in a contest. More games like this and that awesome Knightfall game need to be put out.

The unique effects would be nice, I'd also love to see this made into an RPG type game!

Lots of fun, but I'm wondering how to get some of the higher medals. It seems impossible to do, but I suppose it has to do with looking ahead. Waaay ahead.

Shortly after posting my earlier comment, I got the combo I sought. It was so, so satisfying.

There is a slight bug when you die at the same time as when the 5 levels are over. You get the prompt saying that you died, but it'll also give you one for winning. If you choose to play again, the music will be "doubled" likely that the previous thread did not quit properly. (possibly fixed already, only could get it to happen first time I played)

Other than that, I didn't see anything wrong and enjoyed it thoroughly.

For survival in the endless mode, the yellow powers are quite useful. Transform a group of cuties, and hope that they are the same color as other groups surrounding them, then absorb them all as red if they weren't already red. With a bit of luck, you can last to level 8 with much trouble. Beyond that however, requires a lot more luck and careful preparations. For scoring, it is important to keep track of how many cuties are in medium groups and try to "egg" neighboring hexs to increase the sizes to at least 10 before taking it, even if it means to attack eggs before taking it. Then use the black powers to destroy the egg.

Nice game, but for me the golden eggs are worth too many points. I also think you should get more points for killing large groups of cuties.

As far as I can tell, you lose two points when you break an egg, not two life. Very cool game.

[Edit: Thanks for the correction. Amended. -Psychotronic]

Yeh, egg-breakage only loses you two points, which is really rather meaningless in the grand scheme of things; so the only real penalty is the loss of that tile hatching on the next round (and potentially creating a large combo-group).

All in all, great game! I've tried the unlimited mode twice now to try to get 100K points (for the hard badge on kongregate) - got up to almost 80k so far. The interplay of the various powerup combos makes for very interesting gameplay.