What would happen if two World of Goo-blob look-alikes fell in love? According to Blob's Story, a physics puzzler from Alma Games, they'd find themselves in a strange black-and-white world, tangled in some ropes, and you'd have to help them get together and make really adorable noises. 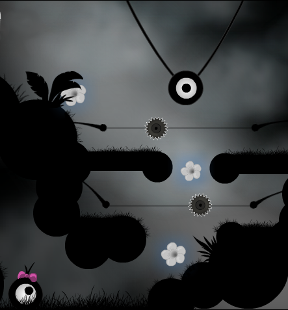 Your job is to cut ropes with your mouse. In most stages, Mr Blob is suspended, while Mrs Blob (with a pink bow, of course) is waiting at the bottom of the screen. Every level also contains three white flowers. Use the magical power of physics and ropes, crates and portals to swing Mr Blob, try to get all the flowers and land in Mrs Blob's lap. Once in a while, you'll face an additional challenge – a coloured flower which disappears after a short while. There are twenty-seven levels, divided into three parts, and you can unlock them only if you have enough flowers.

Blob's Story is quite simple, and the "story" part of it is minimalistic at best, but it's the design that really stands out. The eerie, almost LIMBO-esque atmosphere, with its shadows and gloomy skies, gives the game an otherworldly, even frightening, air. However, the excellent piano tune that accompanies it balances out the bleakness of the level design and makes for a truly pleasant experience. This is a love story, after all, and two strangely cute one-eyed blobs deserve happiness.

It really irks me every time I see a pink bow used to differentiate females from males. At least Mr. Blob doesn't have to rescue Mrs. Blob in each level.

The noise they make when they touch sounds like The Funk from The Mighty Boosh. (If you don't know what that is, google it. The Boosh is genius.)

I get what you're saying, Dandy, but I guess the flipside is... how else do you distinguish gender between two otherwise identical non-speaking creatures? I can promise you that ANY iconic female accoutrement would have done the job, and people still would have had the same reaction you did to the bow. Skirt? Breasts? "Feminine" hairstyle? Someone would still have been offended at a simplified representation of a woman. Both blobs could have been left non-gender specific, which would have worked, but in the meantime as far as an immediate, recogniseable way to differentiate between two characters, I don't find this one that offensive. And after all... what's wrong with pink? Another of my pet-peeves is the automatic rejection of anything "girly", when there's nothing wrong with girly stuff at all if that's what you're into, but that's an argument for another time and place. ;)

@Dora, I don't find the pink bow offensive at all, I just think it's unoriginal and annoying. Plus I know a lot more girls who own breasts than own a pink bow. If I was going to delve into a sexism debate I'd ask why there's nothing to identify Mr. Blob as male. A trilby or neck tie perhaps? It makes as much sense as the bow. However I don't want to start a sexism flame war, at least not at the start of the week, that's more of a Friday activity.

PS. I can't reject anything girly considering I'm a guy that owns a pink tiara... but that's another story. :P

I understand what you're saying, Dandy, but consider then that if breasts were used, you'd get people who were offended that breasts were being used as the sole representation of femaleness. :) Equally as unoriginal as a pink bow is the concept that women are only identifiable and known by their breasts, so either way, you'd wind up with hurt feelings. I'm just saying that when it comes to sexism, I don't think it's anywhere near as cut and dry as "this is X, therefore it must be sexist", which is what I interpreted your comment as. I'm not looking to start any sort of war over anything, I was just responding to the comment about the pink bow which, tied with your remark about being glad the dude wasn't rescuing the chick, I took to imply you found the game sexist, so I apologise. I've just always been an advocate of never letting someone else decide what is or isn't a representation of your gender for you, so to me a girl identifying with a little pink bow should be just as fine as one identifying with a tuxedo. Or a guy who prefers a tiara at times over a tie. :) I love your comments and your insight, I just wanted to offer mine on the matter and probably overthought it.

I actually thought the game was good,unoriginal or not it was well presented. I didn't find the bow offensive at all, but then again that's only me. Thanks for finding this game Dora!

Totally un-challenging. Also, no bonus levels? I got all the extra flowers for what? I got 81 of 81 and 6 of 6 in my first play through, whoop di doo.

Perhaps that's the reason I enjoyed the game, it wasn't challenging. Sometimes you just want a game that allows you to relax, enjoy the game without making you think to much. I enjoyed the design of the game and would love to see it expanded into a longer game with bonus levels.