Beyond the Unknown: A Matter of Time

For most of us, an annoying relative is usually the uncle who always double-dips in the salsa at parties, the sister-in-law who assumes you can always babysit, or the cousin who thinks a t-shirt with a tuxedo screen-printed on it qualifies as "formal wear". Those of us who play hidden-object adventures, however, know that it could be a lot worse. In ERS Game Studios' Beyond the Unknown: A Matter of Time, your family needs help with something a little more complex than uninstalling a bunch of toolbars from their PC. You're on your way to an island where time has become "unstuck", and there you discover your grandfather's, ehhh, liberation of an ancient sarcophagus might have made some powerful deities just an eensy bit angry. I guess not every Time Lord is all about fish fingers and custard, since this one has cursed everything on the island until you can find and return the four golden eagles to the temple the sarcophagus was stolen from. Thanks a lot, Granddad. Couldn't you just need my help "downloading the Wi-Fi" on your phone or something? Together with your little yip-yip dog companion, who can sniff out clues if you show him certain items, you'll have to solve puzzles, search for useful items, and try not to get flung off a cliff by harpies. Look, I'm not saying you shouldn't help your family out, just that you might not want to set a precedent of being able to, y'know, save the world while they sit around. 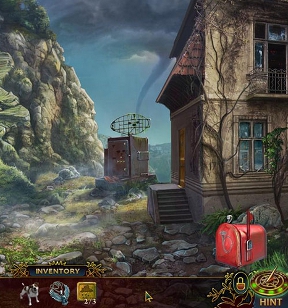 Hidden-object adventures have become more and more streamlined these days, and A Matter of Time is no exception. You've got your customised difficulty settings, your handy instant-travel map, your match-3 option in hidden-object scenes... all of it feels designed to make the experience conform to you rather than the other way around. Some puzzles even have two settings, "casual" and "hard", which changes their solution. Unfortunately, the story, intriguing as it is, is also a little confusing due to the haphazard way it tries to explain its time travel elements, as well as the way it locks more information about characters and the story away until you've taken photos for... reasons, I guess. It makes the game feel disjointed, so it isn't quite the smooth ride you've come to expect from ERS. The plot point revolving around rescuing your grandmother from a sociopath who is keeping her locked in a bedroom until she loves him is actually a little uncomfortable, mostly due to just how absolutely insane they make him look and act towards her, but if he's fooled by a couple pillows and a dusty vase, maybe he isn't that much of a threat after all.

Despite those complaints, however, Beyond the Unknown: A Matter of Time is still engaging. The plot goes more than a little bananas, with backstabs and double-crosses, paradoxes and magical MacGuffins, and you'll quickly discover you've got your very own Marty McFly situation going on. The overall design is beautiful, making even the monsters nightmarishly captivating, and the detail on some of the puzzles makes them stand out from the pack. The gameplay leans more towards classic point-and-click adventuring, so though you'll have to deal with a fair amount of backtracking, you also don't have to worry about being bombarded by one hidden-object scene after another. Though you might be tired of the genre's infatuation with giving you a small, scrappy animal companion, here your dog at least feels more useful than goofy, with several different mechanics and puzzles attached to him. Though it has its flaws, Beyond the Unknown: A Matter of Time is well worth a look. Most players will probably finish it in around three to four hours regardless of difficulty settings, but while it lasts, it's a welcome respite for anyone who likes their hidden-object adventures with a wibbley-wobbley, science-fiction fantasy adventure theme.

This game neeeeeeds a walkthrough. I can't find a skip button and the puzzle I'm working on does not seem to respond to the buttons.

This game comes with a walkthrough as this Collector's Edition from Big Fish Games. :) The hint/skip button is always in the lower right corner. Where are you stuck?