In Victorian London, famed (well, sort of) explorator Bertram Fiddle is sorely in need of a new adventure if he wants to avoid having any sort of regular old boring employment. He and his trusted cyclops Gavin go searching for a job in Episode 1: A Dreadly Business, a point-and-click adventure from Rumpus Animation, currently out for iOS devices (with android and PC versions in the works.) When he gets bumped into by a mysterious stranger, Fiddle unexpectedly ends up on the case of the elusive serial killer Geoff the Murderer. But how far can he get when he's up against Sherlock Holmes? 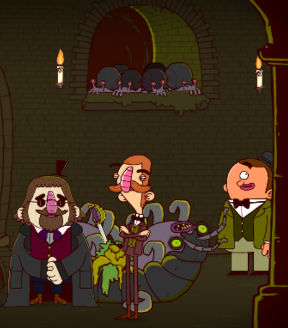 Tap the screen to make Fiddle walk, and double tap a screen exit to quickly move to the next scene. Tap and hold to reveal all the available interactive spots. Tap Gavin, and then a hot spot to get him to help you with any heavy lifting that may be necessary. The puzzles are of the inventory variety, which, with a couple of exceptions, are intuitive in the classic adventure game world of logic. I mean, what else are you going to do with your prized dinosaur bone except use it to entice your dog, amirite? Part of the appeal of the game is the quirkiness of it. Everything from the character designs, to the language used and voice acting, to the collecting of body parts as clues is just charmingly absurd. While not particularly difficult, this first chapter has a darkly humorous story and enough personality to see you through to the end, and to leave you eagerly awaiting the next installment.